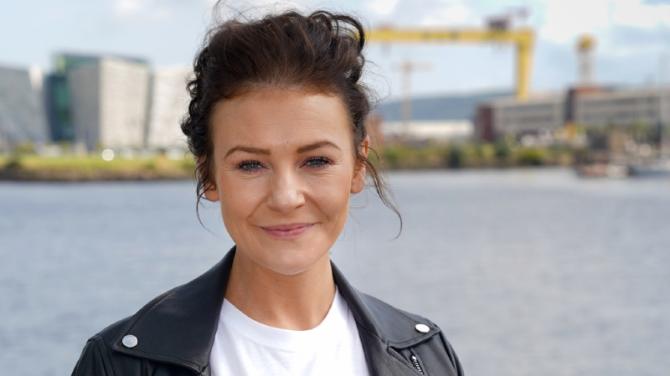 In her own words, she was “blown away” by the level of skill of the cast and professionalism of the production. Kerri found the cast “inspirational” and wanted to become involved with the group and get them the recognition they deserve.

Kerri will appear in a cameo role as Lady Gaga, singing Born This Way, when she joins the Circus of “oddities”.

Kerri said: “This group is ground-breaking. These guys are inspirational and as their patron I want to ensure that they get the recognition they deserve and can perform to a wider audience.” I am very proud to be part of the movement that finally smashes the “learning disability” theatre performance barrier and public perception.”

Kerri and Skyzdalimit were just about to embark on their first touring production throughout the island of Ireland in 2019, including Belfast and Dublin, when Covid-19 struck.

Pearse McCloskey, director, said: “It will be a dream to have Kerri performing on stage with us! The cast are so excited! We can’t wait. It’s very unfortunate that our advocate, Ryan “Duff” Tracey, can’t be on stage with us now too as we was called to appear on Australia’s Got Talent the same weekend of the shows! We wish him the best of luck on that programme.

"Circus is an “immersive” musical tour de force. A thoroughly enjoyable and captivating immersive experience for all the family where the audience have the opportunity to be directly involved in the performance - singing and dancing along and joining in some of the scenes. We really hope the local community comes out to support us to help us break down barriers and promote diversity.”

Skyzdalimit are a cross-community theatre group for adults with a learning disability and autism, they aim to empower people with disabilities through theatre and music. Skyzdalimit theatre group are a part of the Mencap network of local community groups.