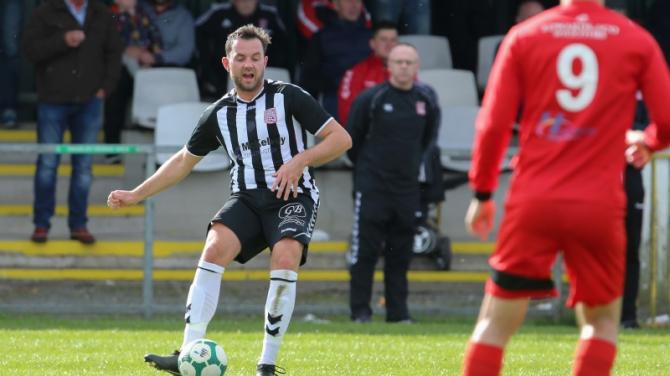 TEN-man Dergview fell to a third successive defeat with this reversal at home to the PSNI who themselves have now won two in a row.

All the goals came in a rip-roaring second half with the visitors, in particular, counter attacking with devastating effect to secure three precious points which lifts the Newforge Lane outfit out of the bottom two.

Goals by Lukasz Adamczyk, Jake McNeill and substitute Tony Tumelty secured a second league win on the bounce for the visitors, who appear to be on an upward trajectory after a poor start to the season.

The home side had the ball in the net during the first half when Andy Sproule raced past a defender to fire beyond Jordan Williamson but referee Neil Robinson spotted an infringement and the goal was duly chalked off - a decision which greatly frustrated the home side.

The deadlock was broken just before the hour in a sweeping move which ended up with Dylan Wilson breaking away on the right to cross for Adamczyk, who, standing all alone, finished from six yards.

That goal effectively dictated the pattern of the contest thereafter as the hosts went in search of an equaliser. Striker Adam Dougherty fizzed inches over for the hosts while at the other end goalkeeper Alan Buchanan held a rasping shot from Mark Anderson after he had been teed up on the edge of the area by Orman Okunaiya's quick free-kick.

As the game opened up the Dergview defence was being stretched and the PSNI duly doubled their advantage following another incisive move. Anderson and Wilson were both involved with the latter picking out McNeill who had time to fire across goal and pick his spot inside Alan Buchanan's left post.

Things then went from bad to worse for Dergview when centre-back Dale Maxwell saw red for a second yellow card. However Smith temporarily breathed new life into the Dergview challenge when from the right angle of the penalty box he chipped the ball expertly over Williamson and inside his back post.

Dergview's joy though was short-lived and following another sweeping counter attack substitute Aaron Cochrane broke on the right to pick out fellow replacement Tumelty to head home and restore the two-goal cushion.

But no sooner had the visitors grabbed their third than the 10-man hosts, who had no option but to throw caution to the wind, hit back with their second. Left-back Matty Buchanan popped up in the opposition penalty box and, with the poise of a seasoned attacker, side-stepped two visiting defenders before slotting the ball past Williamson.

By now it was end-to-end stuff as the visitors spurned a couple of glorious opportunities to finally put the issue to bed. And they almost paid the ultimate price. Right at the death Smith clipped a teasing ball into Dougherty who, much to the relief of the travelling supporters, swivelled to fire a low shot into the side-netting.