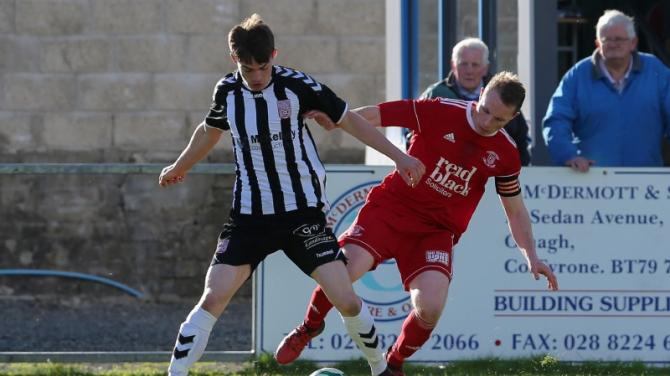 SCORING goals and putting games to bed is becoming a real problem at Dergview but it’s not for the want of trying.

For the second consecutive week manager Peter Allen was left to rue a host of missed opportunities as Dergview conceded another late, late goal to lose the game. This time it was high-flying Ballyclare Comrades who left Allen frustrated.

It looked like Allen’s side would have to settle for a point despite dominating the second-half, but then Jamie Willighan broke the homesters’ hearts with a 93rd minute winner.

Paul Smith had earlier grabbed an equaliser for Dergview on the stroke of half-time to cancel out Adam Gray's early opener.

“It was a sucker-punch at the very end because they hadn’t created anything in the second-half,” said Allen. “It was a hard blow, we had dominated and had three or four changes to win the game – we didn’t take them and it’s come back to bite us.

“It’s very tough to take. I asked the players at half-time to have a real go at it and that’s what they did. We just couldn’t put the ball in the back of the net. We practice shooting every Tuesday and Thursday night but it’s different when you’re in front of the goal in a game. But it will turn, the players will keep putting themselves in there and continue to be brave.

“Away to Portadown we got beaten in the last minute and on Saturday it was the same story. Portadown and Ballyclare are two of the better teams in the league, and we dominated both games. That’s the only positive we can take out of it. It’s just not bouncing for us at the moment.

“I told the manager at the end of the game that it was a good goal on the counter-attack. Sometimes you just have to take your hat off to the other team.”

In fairness, Comrades called the early tune and after Dergview right-back Andrew Sproule cleared a header off the line following a corner kick, the visitors grabbed a 15th minute lead.

The home defence failed to clear their lines, the ball broke to Gray, who showed quick feet to step past his marker and hammer a rising shot inside Alan Buchanan's left post.

Dergview gained a foothold after that early setback however their opponents had two great opportunities to double their advantage around the half hour mark.

The lively Thomas Robinson cut inside from the left to unleash a thunderbolt which cannoned back down off the crossbar before being hoofed to safety.

And moments later Robinson went close again when scooping a dangerous Michael McQuitty right-sided cross over Buchanan's goal from no more than six yards out.

Dergview had offered very little in the final third up to this point however the hosts almost equalised shortly afterwards when a poor clearance by Comrades keeper Kyke Rowe put his defence under pressure. Sproule played the ball quickly into Smith but Rowe made amends for his earlier mistake by pushing the attacker's attempted chip around a post.

Smith though wasn't to be denied and on the stroke of half-time excellent play by Sproule on the right and a stunning cross from Adam Buchanan was superbly controlled by the attacker to hammer home.

No sooner had Dergview equalised than they almost fell behind again. The visitors swept forward on the left, Kane burst through the middle to usher in Robinson but he was denied by an outstanding save from Buchanan.

Dergview should have taken the lead early in the second half when Matthew Kirk and Smith combined to release Adam Dougherty but, with only Rowe to beat, the striker flashed his shot across goal and inches wide.

Smith again picked out Dougherty moments later but the striker's first touch let him down before Comrades swept forward on the counter attack for Buchanan to deny Robinson with another excellent stop.

By now though the home side were beginning to dominate as Smith had an effort chalked off for offside after a sweeping move involving Sproule and marauding defender Mickey Logue on the right flank.

Sproule then warmed the hands of Rowe with a rasping drive after good play by Falconer while at the other end Kane failed to hit the target when well placed.

The visitors though remained dangerous on the counter attack and two minutes into stoppage-time Kane galloped away on the right to pick out Willighan and the supersub did the rest.