CBS U16s progress to second round of Schools' Cup 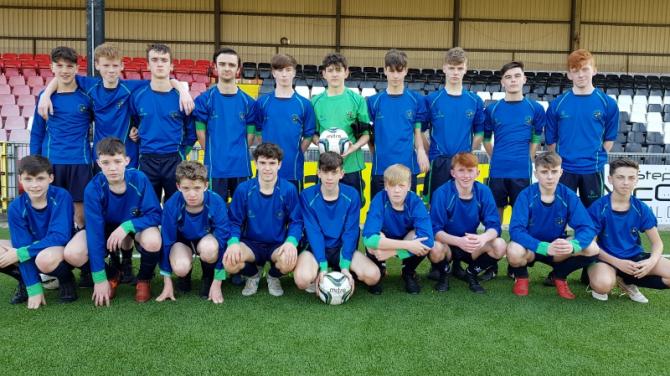 The boys produced a dominant display in their first match of the season with the only thing missing being the finishing touch.

The CBS took a few minutes to settle, but once they found their stride they took complete control of the game and were never really in any danger. At the back Brian Campbell, Michael McAnea and Oisin Gormley were faultless throughout, along with goalkeeper, Adam Groogan, whose distribution was first class.

The majority of the CBS best attacks started from the back, as they switched play from side to side and launched attacks at pace when the opportunities arose.

CBS had several chances in the opening 20 minutes with Sean O’Donnell, Odhran Brolly and Oisin Miller continuously working themselves into good positions only for their final ball to let them down. The breakthrough came in the 25th minute, as Miller found Brolly in acres with a fine through ball and the midfielder produced an excellent finish from twelve yards out. The CBS boys should have been out of sight at half-time but the score remained at 1-0.

The second half was more of the same as the CBS dominated and created chance after chance, but again their decision-making in the final third let them down.

Despite the CBS domination, as long as the score remained at 1-0 St Columba’s were always in the game and they very nearly took the match into extra-time with five minutes remaining.

From their first corner of the game a St Columba’s attacker met the cross with a powerful header which had to be cleared off the line by Gormley. Despite this late scare the game finished 1-0 to the CBS who have now booked a home tie against Newry High School in the second round.