Sproule: Championship survival is the main aim for Dergview 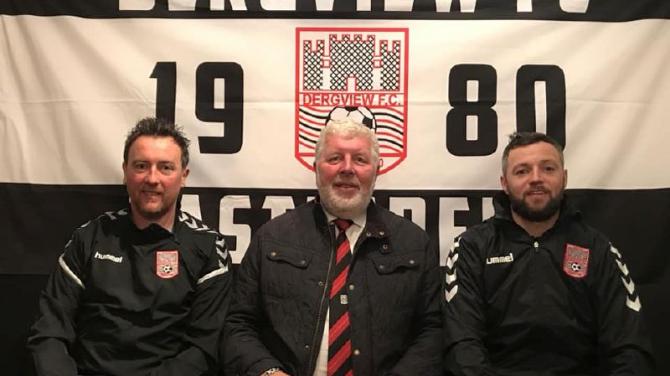 DERGVIEW's new manager Ivan Sproule has stressed his main short-term goal this season is to keep the club in the Championship.

The former Northern Ireland international and Ardstraw boss was appointed as Dergview's first team manager last week, following the departure of Peter Allen, and was on the side-line on Saturday to watch the club lose 5-3 at Knockbreda - their eighth straight league defeat.

A native of Castlederg, Sproule left Dergview as a teenager and enjoyed a hugely successful career with Hibernian and Bristol City, earning 11 caps for Northern Ireland between 2005 and 2007. More recently the 37-year-old winger returned home in 2014 to feature for Linfield, Ballinamallard United and Dergview.

Having departed his position as player-manager of Intermediate League side Ardstraw, held since May 2017, Sproule has appointed Neil Coulter as his assistant manager.

Allen departed after 10 months in charge, with the Tyrone side in the bottom three in the league.

Speaking after the latest defeat, Sproule said: "The club are on a terrible run, we have lost eight in a row, so there are big problems at the club. I am the man asked to spearhead the turnaround. I spoke to the club three times last week before I took the job. People within the background of the club are well aware of what I expect from not just the playing staff, but the club as a whole.

"Championship football has moved on from years ago; you only have to look at the likes of Larne and their money, Portadown, Ballyclare: these are established clubs from big areas, with a lot more financial power.

"For Dergview to compete at that level is becoming a bigger goal each season.

"It's a big job to keep the club in the Championship as we have lost eight in a row, and if we can do that then anything else is a bonus. But from what I have seen in the squad we have a chance. It's a light squad, but we have quality.

"We can't add to the squad until January, so we have to worry about the players that we have got. We've got to get some of them back on the field as there is an injury list which doesn't help a small squad. Experienced players have left the club so it has taken its toll on previous managers.

"The club have lost two managers recently so that tells me something is wrong. Richard Clarke and Peter Allen are two good football men and knowledgeable men. We have been fighting this plight for a number of years, so we have to look for a different strategy to run the club."

Sproule leaves Ardstraw after a hugely successful 18 months in charge and he admits it was a difficult decision to leave, but insists his previous connections with Dergview meant the job was impossible to turn down.

"Everyone knows my connection at Dergview, but at the same time I was doing a job at Ardstraw. We were carrying out a successful project after a very difficult period after the flood.

"First of all, I am very gracious to Ardstraw for giving me an opportunity in management. I was there for 18 months, we finished second in the league last year, developed a lot of youngsters along the way, and we had got into a semi-final this year.

"We had some big games against the likes of Tobermore and Bangor, which are bigger sides than Ardstraw, and we conducted ourselves really well. I feel like I have left the club in a better place.

"The players gave 100 per cent and when you are at a club a certain length of time you can get emotionally attached.

“It was a difficult decision to leave Ardstraw. People know my aspirations as a player and manager is to get to the top level. In my heart of hearts the challenge of Dergview was one I wanted to take on.

"Ardstraw were disappointed I was leaving, and the club knew I was hurting to be leaving. I wish them all the best in the future because I will never forget what they have done for me. There are fantastic people and have a fantastic club."

He continued: “But Dergview were always a club with connections with my family and me. It was a move which was always likely to happen.

“When I was playing my football for Dergview it was in the Fermanagh and Western, but we were classed as the top dogs. They wanted to be the leading club in this area and everyone was very good to me. A lot of people came over to watch me play, whether it was for Hibs or Bristol, or Northern Ireland, they always supported me.

“Everyone chats about boyhood dreams and I always thought it would be great to come back to Dergview some day as a manager.

“I’ve got my challenge now, it’s a big one, but it’s certainly one that I am relishing.