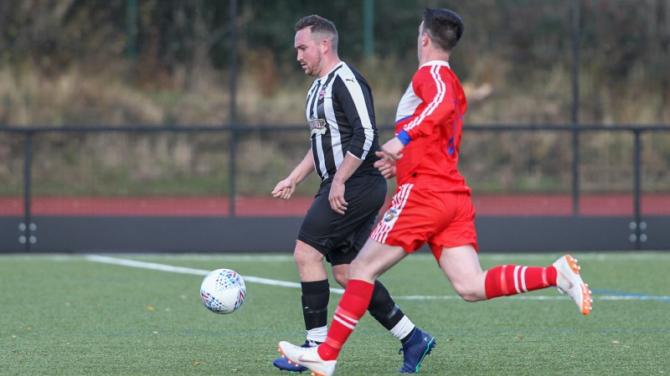 OMAGH Hospitals extended their winning streak to three matches in the Fermanagh and Western Division Two with a comfortable victory over Dunbreen Rovers on Saturday.

It was Rovers, however, who broke the deadlock after seven minutes from the spot after McCarthy was adjudged to have been pushed in the box, with Niall McCaffrey converting the penalty.

That was as good as it got for the visitors, though.

Hospitals upped the tempo and were finding joy down the flanks with Thomas Mullen and Tomas Flannigan causing trouble, while Caoilan O’Donnell and Mick McCullagh were bullish in attack.

The equaliser came on 27 minutes when McCullagh got on the end of a great ball whipped in from Mullen on the left to head past Andrew Maguire.

And on the stroke of half-time, Hospitals edged in front, Keyes diverting in Johnny Brown’s corner delivery.

The game was put beyond doubt only five minutes after the restart when an excellent Flannigan cross from the right was powerfully headed past Maguire from close range by McCullagh.

The win keeps Hospitals in fourth place, but they have won four of their six matches and look well placed to mount a credible challenge for second-place.

Dunbreen Rovers, however, remain rooted to the bottom of the table with only one from seven games.