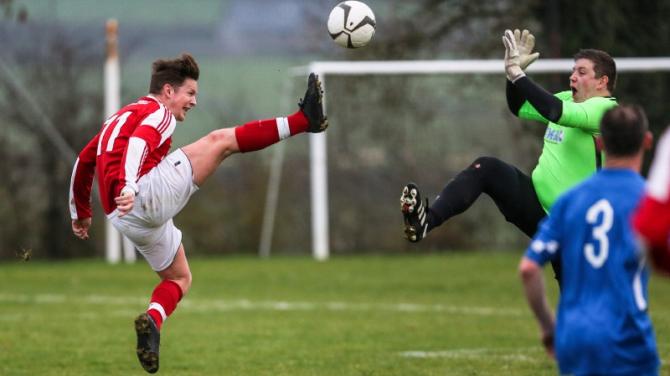 RYAN Burke netted a hat-trick as Killen Rangers kept the pressure on Fermanagh and Western Division 1 leaders with a 5-1 victory over Strule United on Saturday.

Burke’s treble helped Killen to their sixth league win of the season and keeps Rangers in second place, level on points with leaders Enniskillen Rangers, although they have played two games more games than the Fermanagh side.

The home side opened the scoring after only five minutes after a mistake by Strule goalkeeper Barry Cunningham allowed Burke a simple tap-in.

The lead was doubled on 27 minutes when Burke latched onto a probing long ball before slotting home confidently.

Kyle McCrory scored to give Strule a chance, but Burke netted his hat-trick on 37 minutes to restore Rangers’ two-goal advantage.

Strule rallied after the restart, conjuring up a host of chances, but two goals in the final 10 minutes gave the hosts a handsome victory – Gerard Duddy and Graham Young putting the gloss on a fine performance.