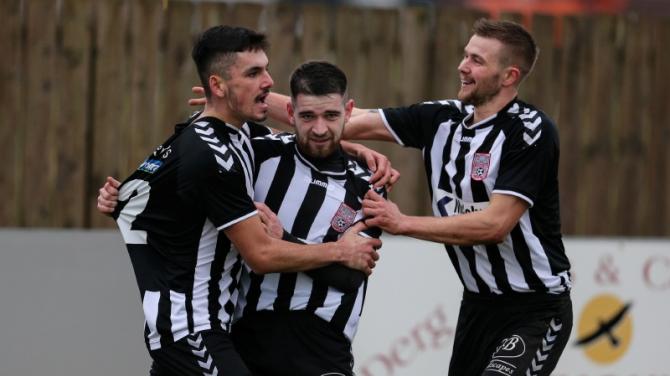 DERGVIEW FC were just minutes away from claiming a huge and somewhat surprising win over leaders and Championship title favourites Larne at Darragh Park on Saturday.

Ivan Sproule’s side were leading until the 82nd minute when David Scullion netted an equaliser for the visitors to deny Dergview their first win in 13 matches.

The home side broke the deadlock in the 13th minute through Paul Smith to put them on course for a memorable result, but their task grew more difficult when Adam Buchanan was sent off with half-an-hour remaining, a ‘horrible’ decision, according to Sproule, which he believes cost his side.

“Everyone knows the run that the team has been on so it was nice to finally stop the run of losing games,” said Sproule.

“Obviously we have been close a few times in my other five games in charge. Even when we were whacked 6-0 by Loughgall, it was 0-0 until the 50-minute mark.

“On Larne on Saturday, no one outside of our squad and background staff believed we could have got anything from the game. Everyone in the country is talking about Larne and the money they have, and how well they are playing. They dominated possession but our gameplan was to counter-attack and break quickly and we did that to a tee.

“At 1-0 up we were denied a penalty which could have made it 2-0 before the half-time break. We missed a couple of other good chances so just the one-goal lead at the break was probably harsh on us.

“It was a horrible decision from the referee to send Adam Buchanan off. It has cost us. We were down to 10 men with half an hour to play and Larne got their equaliser.

“If we had 11 men on the park I believe we would have held on. We were actually down to nine men when Larne scored, as Curtis Crawford was off injured. Our man made the clearance and it richoted into the goal by their player, but when the luck is against you these things can happen.

“But looking at the overall performance our team put in a good shift and it’s a step in the right direction. To take the point against the leaders is positive. I have to give my players credit. They have taken a bit of a battering for a number of weeks now, so they deserve to be praised.”

Dergview had led from the 13th minute when Smith made the most of a mix up in the visiting defence to sweep home the loose ball.

Buoyed by this, Dergview might have doubled their advantage through Dale Maxwell but he just missed turning home a corner midway through the first half.

Larne came closest to levelling in the first half through Martin Donnelly but despite weaving past a couple of defenders couldn't finish by keeping the ball on target.

Dergview were reduced to 10 men just before the hour following Adam Buchanan's second caution after an off-the-ball incident with Jeff Hughes.

Even then, it still took Larne until the 82nd minute to find the net when Scullion ran on to a long clearance by Conor Devlin to direct the ball past Tom Hegan.

Dergview might have regained the lead straight from the kick off. Andy Sproule dashed in from the right, went past two defenders and beat Devlin with a low shot but the ball went agonisingly past an upright.

Larne, too, could have snatched victory but Darren Stuart rifled straight at Hegan, who then pulled off a stunning save to thwart Fuad Sule deep in stoppage-time.

Meanwhile, Dergview will hope to win their first match under Sproule on Saturday when they travel to Ballyclare Comrades in the league.

“Picking up a point against Larne is no good unless we can go to Ballyclare and get more points.

“We won’t get carried away. We had lost 12 games in a row and our problems won’t be fixed over night. We know we have a lot of hard work to do. Everyone will be looking at the result on Saturday and if we are defeated then they will say it’s the same old.

“That’s the pressure of the Championship. There are no bad teams in this league.

“It’s back to work. We want to go to Ballyclare and put in a positive performance.”

Sproule admits his side need to start winning sooner rather than later. His side remain rooted to the bottom and are five points adrift of safety.

“Unfortunately for us, Ballinamallard and Limavady both won - we can’t get too far behind the rest of them.

“If you lose 12 games on the bounce, a draw isn’t much good to you - we need three points.

“Saturday is an away game but we need to go there and get the win. There is no hiding place.”