Another defeat for Mountjoy as Dergview Reserves hold champions 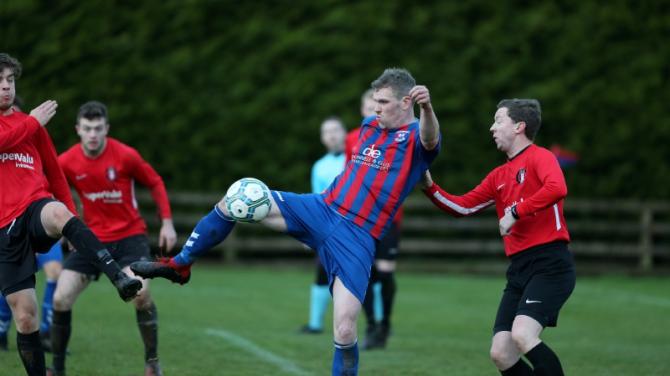 Fermanagh and Western Division One

MOUNTJOY United fell to a fourth consecutive Division One league loss on Saturday.

Stephen Sheridan and Ronan Orsmby scored a double each as Irvinestown Wanderers put David Gilfillan’s side to the sword.

Sheridan opened the scoring in the first-half, Thomas Owens made it two shortly after and Ormsby made it three to give Mountjoy a real mountain to climb.

Lee Frazer gave United hope with a quality strike, but Wanderers restored their three-goal advantage with Ormsby sealing his brace.

Trailing 4-1 at half-time, Gillfillan made a triple change in personnel, and the fresh faces sparked an improved showing with substitute Gregory Dickson grabbing Mountjoy’s second of the afternoon.

It was Irvinestown who grabbed the game’s all-important next goal, however, with Sheridan scoring his second of the day to complete the victory.

The win moves Wanderers into fifth place, while Mountjoy fall into the bottom two.

The chase for the title is really heating up as we approach Christmas. For the second consecutive week, Enniskillen Rangers dropped points, this time drawing at home to Dergview Reserves.

Adam McElhill restored Dergview’s advantage with an impressive volley from 30 yards to set Collie Robinson’s side up for a memorable victory. However, the reigning league champions would have the last say, with Burleigh grabbing his brace to salvage a draw.

Enniskillen remain second, a point behind leaders Killen Rangers, while Dergview are now in seventh place and four points above the drop zone.

Third-placed Tummery Athletic, however, were unable to capitalise on Enniskillen Rangers’ surprise slip-up, as they could only draw 1-1 at home with strugglers Lisbellaw United. Athletic are still unbeaten, but remain two points adrift of the summit, although they have played two games fewer than their rivals.

Meanwhile, Strule United moved two points clear of the relegation zone with a crucial 3-2 victory over NFC Kesh. McCrory, McAleer and Turbett scored the goals for the hosts.

Christopher Dooley struck four times as Augher Stars returned to winning ways in style, taking the points in an 11-goal thriller with Maguiresbridge.

Keown scored a brace while Kavanagh also registered on the scoresheet.

But it was Omagh Hospitals who recorded the victory of the weekend as they consigned Magheraveely to their first defeat of the season.

The leaders hadn’t even dropped a point until Saturday when the Hospitals outplayed them to move into second place, although they are still eight points adrift of the title favourites.

In Division Three, third-placed Lisnarick kept the pressure on at the top of the table with a stunning 11-3 victory over Mourne Celtic, while basement side Enniskillen Rovers were brushed aside by town rivals Enniskillen Galaxy.