Hoss XI vs Dom XI is a huge success 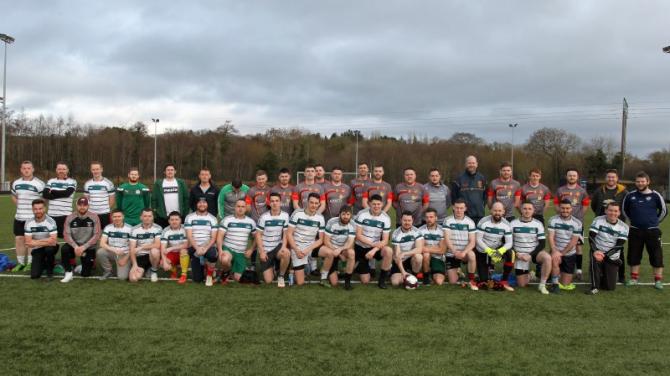 THEY say it’s the season of goodwill and the spirit of generosity was certainly evident in Omagh on Sunday when the friends and family of two popular young men who tragically died following separate accidents came together to play a memorial football match.

Up to 50 players arrived in Youth Sport Omagh on Sunday afternoon to take part in the 'Hoss XI' vs 'Dom XI' to battle it out for the 'Omagh Cup'.

Joe ‘Hoss’ McDermott died in 2015 following an accident on a construction site in Perth, while Dominic Early passed away in 2017 after being involved in a car crash near Tempo.

Both men were very popular in the local community and their deaths were met with widespread shock and sorrow.

To celebrate their lives and to raise money for their families at what can be a difficult time of year, their friends, Ciaran McCaffrey, Robert Porter, Eamon Keyes and Michael Treanor, thought up the initiative to organise a charity match.

Initially, a seven-a-side match was planned, but interest in the event was so great that the friends opened it up to an 11-a-side, with roll-on-roll-off substitutes allowing for dozens of people to take part.

Players donated money towards hampers to be presented to the two families while all donations at the game itself was split between the Kevin Bell Repatration Trust and Doing it for Dom Foundation.

"We wanted to do something for the families, to let them know that we are thinking of them and always here for them,” explained Ciaran.

"Initially we were looking to set up a seven-a-side match but there was great interest in the community and it just exploded. It was a snowball-effect.

"Vouchers for oil and a break away to the Clanree Hotel in Donegal were presented to both families, while money was also donated to the charities Kevin Bell Repatration Trust and Doing it for Dom Foundation.

"The families are just over the moon."

Tyrone GAA star Peter Harte was a special guest and stood out on the field, as ‘Dom XI’ cruised to a 10-3 victory with a few teachers from Sacred Heart College also shining.

“It was a great day’s craic, a lot of respect was shown. It was a day to remember,” Ciaran concluded.

The organisers would like to thank local businesses for their support on the day, including the Coach Inn, the Village Inn, Active 2, Grants, Silverbirch Hotel, Treanor Meats, See See and Annie’s Bar.