Sproule hopeful of stunning Coleraine, as local teams excel in Irish Cup on day of drama 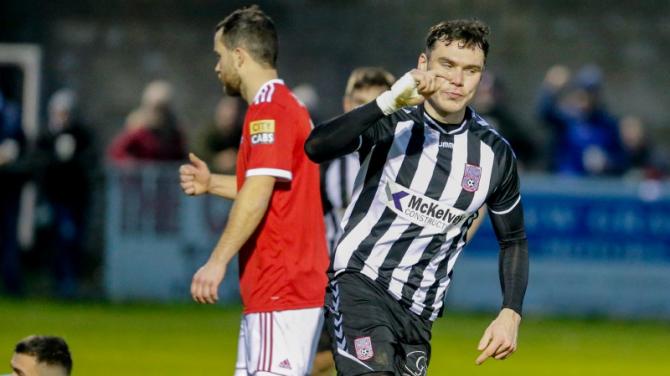 REMARKABLY, three local teams remain in the Irish Cup at the sixth round stage after some eye-catching results on Saturday.

On a tense afternoon, Championship strugglers Dergview put their poor league form to one side to scrape past Intermediate League club Maiden City on a 3-2 scoreline, while Ballinamallard United thrashed PSNI 5-1. But perhaps the biggest result of the round was Strabane Athletic's stunning 2-1 reverse victory at Knockbreda of the Championship.

If Ivan Sproule's Dergview side are to go any further in the competition, however, they will have to do it the hard way after the Darragh Park outfit were drawn away to holders Coleraine in the last 16.

The draw was kinder to Harry McConkey's 'Mallards who will face Carrick Rangers and Strabane Athletic who will play Larne Tech OB.

Despite the enormity of the task lying ahead for his side, Sproule remains optimistic - and he is delighted to see other local clubs still in the draw as well.

"It's good for me to see the local clubs do well," said the former Hibernian, Bristol City and Linfield player. "Being involved with Ardstraw, I have come up against Strabane and I know what they are building there.

“They are a great outfit and a good club. It was no surprise to me that Strabane went to Knockbreda and got the result.

“They have got some Premiership experience in Liam McMenamin and players like that in their squad.

"Football here is growing strong. There is a lot of talent here. We are leading the way this direction in Tyrone with the senior football we can provide young players

"It is vitally important that Dergview stay in the Championship so that we can continue to give these young players a platform to go and show their talent.

“Everyone wants to play at the highest level, if not in the Championship but in the top-flight and that's hopefully something we can achieve at Dergview."

All of the last 16 ties take place on Saturday, February 2, and it's a day that Sproule is looking forward to.

"Coleraine are the cup holders and we will go in as heavy underdogs. But the cup is the cup; you look at the FA Cup and see some surprising results at the weekend.

"Coleraine have got some great players but we will go there without any fear and make it a difficult day for them."

With the Castlederg-based outfit sitting uncomfortably on bottom spot in the Championship, Sproule believes the Irish Cup allows his players an opportunity to express themselves without any pressure.

"The cup is probably a welcome distraction for us; it's something competely different and the players will be able to go out and express themselves.  It's a free shot because everyone will be expecting them to beat us.

"Sometimes the cup can take your mind off the pressure of the league.  And the pressure is on everyone in the club. We have to get ourselves out of a sticky situation with 11 cup finals to come."

More on Dergview in this week's Tyrone Constitution...