Teague happy to be back at Harps after spell at Mallards 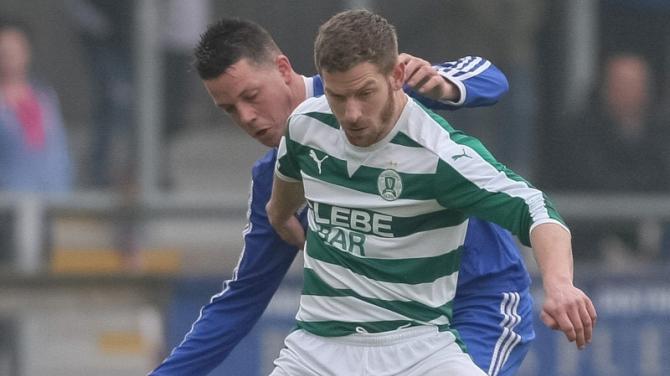 DARREN Teague admits it was a "very difficult decision" to leave Ballinamallard United after a short spell at the club but he is returning to his beloved Strathroy Harps with a smile on his face.

The Omagh man joined Harry McConkey's side to test himself in the NIFL Championship in August last year, after many successful years at Fermanagh and Western giants Harps.

The 31-year-old made an impressive start to life in Fermanagh, playing well enough in pre-season to grab a place in the starting XI for the opening day league victory over Limavady United.

However, in his second competitive appearance for the club Teague suffered a nasty ankle injury in a match against Larne which would rule him out for three months. It would prove to be his final outing for the Mallards.

Struggling to find the right balance between managing his Omagh gym and the commitment needed to play in the Championship, Teague made the decision to call it quits at Ballinamallard earlier this month and re-sign for Strathroy Harps.

Teague's arrival coincides with the return of a number of key players, including his younger brother, Damon, as well as Conor O'Donnell, who both came off the bench at the interval on Saturday as Harps scored three second-half goals to come from behind and stun Lisbellaw United 3-2.

Victory keeps Harps' Division One title hopes alive as the club aims to put a slow start to the season behind them. The Irish Junior Cup is the priority this time around, however, while winning the Mulhern Cup is a realistic goal.

Reflecting on his time at Ballinamallard, Darren said: "It was all going well; I was happy to be starting and doing my bit for the team. We beat Limavady 3-0 on my league debut but then I was injured in the second game. Then I started to make changes to the business - we completely revamped the gym."

Asked if he thought things would have panned out differently at Ballinamallard had he stayed injury-free, Darren said: "Yeah definitely. I was flying, really buzzing and I was really happy to be playing. I think if I had a bit more time - as I say, I was making a lot of renovations to the gym - I could have made it work.

"I had to make the decision - I was asked to play against Dergview over Christmas - but there was just too much going on. I didn't want to mess anyone about so I made the decision to be released and go back to Strathroy Harps.

“It was a very hard decision to make because I still wanted to challenge myself at that level with Ballinamallard. The club were very good to me; they were very welcoming, it's just a pity the move was cut short."

Teague is staying positive, despite the fact the move didn't work out how he had planned - and he insists he doesn't have any regrets about his time at the club.

"I felt that I added experience to the Ballinamallard team and I think if you ask Harry McConkey he would have said I added something to the dressing room. It's a pity I didn't push on because my fitness levels were good up there, it was a great challenge and I was enjoying it.

"At Ballinamallard, there are physios and strength and condition coaches; from my time at the club years ago and the change now is unbelievable. The set-up is very professional. In the short two months I was there, I feel like I'm bringing a lot back to Strathroy Harps."

He continued: "I don't have any regrets at Ballinamallard; I'm glad I went back and tried it. I wasn't playing as much football last year and I was toying with the idea that maybe I was losing that little bit of quality, but I got a good pre-season under me at Ballinamallard and played those couple of games at the start of the season and I proved I could still do it."

Teague won't be eligible to play for Harps until Saturday, February 3, when they play host to Bessbrook in the last 16 of the Irish Junior Cup, but in the meantime he will be happy to watch on as the club continues to improve.

"Harps have gone from not playing so well this season to bringing players back to the club and now we have got very strong," he said. "I wouldn't rule out the club doing very well in the Junior Cup. I am really happy to be back.

"I think the league is out of our depth this season, we would be needing the top teams to be dropping a lot of points.

"We are working hard in training though and there are big numbers turning up, and I feel the team is beginning to gel together at the right time.”

Harps have been boosted by the availability of a number of players and many were on show on Saturday.

Centre midfielder Patrick Nugent made his second appearance in the victory over Lisbellaw and his experience will be key for the remainder of the season.

Meanwhile, versatile attacker Simon O'Neill made an impression off the bench in his first appearance since August. And nanager Benny McElholm will play the remainder of the season as a centre-back and capped his return with a bullet header to win the game.

Right winger Damon Teague – Darren's younger brother - has recovered from a serious knee injury and came on as a substitute while Conor O'Donnell, who previously had commitments in the GAA, scored a double as Harps began to look more like their team of old.

“We have four or five players added to the squad and we have got good depth now,” beamed manager McElholm. “They bring in great experience and together with the younger players who are out to make a name for themselves, we have plenty of competition for places. It's what we need at this time of year.

“We are through to the last 16 of the Irish Junior Cup, we're going well in the league and we still have the Mulhern Cup to look forward to so it's important to have a big squad.

“Everyone who has been involved in pre-season has been absolutely brilliant and they have had their chance, but now we have a healthy competition for places.”

Strathroy’s title credentials will be tested when they travel to play Killen Rangers this Saturday.