No hanging around as Mountfield FC clinch title in record time 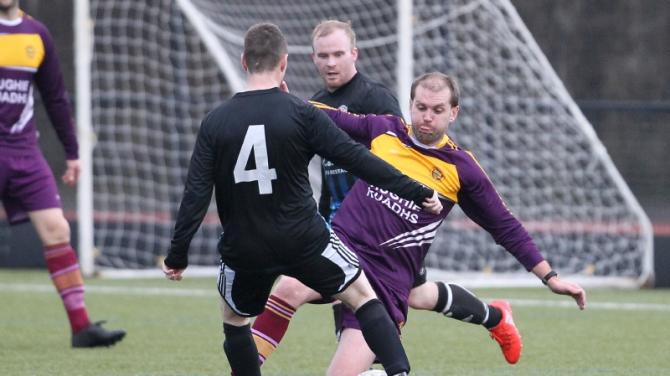 With January not yet over, Mountfield FC may have written themselves into the history books by clinching the season’s earliest ever title win in the Fermanagh and Western League.

The mild winter to date may have played its part in allowing games to get played with little or no interruption to the programme – but even with that Mountfield did not hang around when it came to claiming the title – and they did so in fine style!

On Saturday they impressed once again in a one-sided affair at Youth Sport, Omagh, easing to a convincing 6-0 over Enniskillen Rovers.

The measure of this win and the quality of the Mountfield performance underscored their overall season to date, with the side unbeaten in 15 games, and delighted to wrap up the league title – with a game to spare.

Mountfield have played some great football all season and will return to division two with silverware. That, said manager, Paul McFadden, was important to them: “We wanted to get promotion as champions and to have done that the way we did is great. We have a game left against Fivemiletown in the league and want to go unbeaten, then we have the Mulhern and the Division Three Cup too – we are in those competitions to win them too.”

There was some disappointment though at the end of the game on Saturday when there was no cup presentation.

“This was our last home game of the season, we had a big support here today but unfortunately there was no silverware,” he said.

It’s understood the local league had indicated at the end of last week that there would be no presentation on Saturday, although no one from the governing body had apparantly told the champions.

Rovers were under pressure from the start as Mountfield created a glut of chances. The scoring was opened on 13 minutes when Eoin Mullin was on hand to poke home from close range after a great run and cross from Darren Campbell. The cross was drilled off goalkeeper Colm Rice by Daryl McCullagh, before falling to the defender who made no mistake.

The floodgates looked like opening as Mountfield probed and harried, yet it remained only 1-0 at the break. Mc Cullagh, Campbell, Carson and Bara Collins all carved out chances, but a combination of good goalkeeping and poor finishing prevented the inevitable.

Rovers had one shot on target in the first half, Paul Somers blasting wide from distance as an inspired Mountfield defence once again showed their worth, Alex Brian, Emmett McFadden and Ryan McGarrity impossible to break down.

Within four minutes of the restart, Mountfield had doubled their lead, a fine finish too from Shane McCullagh after a patient build-up on the left and they should have added to the tally, as Collins drilled a free kick wide and Mountfield continued to control things.

The third goal did come on 63 minutes with Barry McCrory’s first touch. The substitute’s 20 yard drive found the top corner after another quality delivery from the impressive Campbell and the same combination provided number four. Campbell rolled the ball through for McCrory on the right, who cut in before sliding the ball past a defender before finishing with a great drive on 72 minutes.

There were other chances as Rovers struggled to curtail the champions elect, although Scott Fleming and number 10 Shane Carty put in a great shift for the visitors.

Mountfield keeper, Dara McDermott, had one save to make in the entire contest such was the home team’s dominance.

The deftest of back heels got Campbell a deserved goal with 12 minutes remaining – a ball from the right turned in by Campbell who was surrounded by defenders.

In reality the hosts could have hit double figures, Brian, Campbell and substitutes Dan Touhey and McCrory missed chances before the sixth and final goal came in injury-time from a well directed header from Brian.

With the title win wrapped up in January the champions are already looking forward to life in division two with manager McFadden confirming he has his current group committed with others set to link up.

There was a special moment after the game as referee John Coyle returned to the pitch to offer congratulations to Mountfield in the absence of any cup presentation.