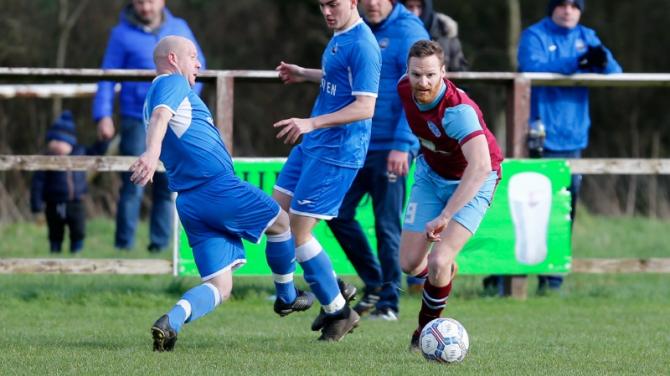 Tummery fell behind just five minutes into the match, but aside from that the Dromore side dominated to book their place in the quarter-finals of the Junior Cup for the first time in almost two decades with Gerry Love’s side now set to face St Oliver Plunkett’s.

Despite their dominance over opponents Finaghy, it still took a strong second half performance to eventually see off decent opposition on a great surface, despite torrential overnight rain.

That early lead for the visitors came against the run of play, and subsequent goals from Aidy McCaffrey (2) and Ruari Sludden were enough to nudge the hosts through. Indeed Athletic went close on several further occasions, but they fully deserved their place in the last eight.

There was a lack of sharpness to Tummery in a poor enough opening 45 minutes, and they conceded thanks to a defensive slip after carving out early chances.

Adam Close swept the ball past Chris Snow after an initial shot from Chris Stewart was cleared off the line by Blain Campbell – certainly not the start that the home side would have wanted.

Sludden, McCaffrey and Cathal Beacom all created chances before Mc Caffrey levelled matters on 18 minutes. The  impressive Ronan McNabb swung over a great ball from the right and McCaffrey was on hand to drive the ball to the net. It could have signalled a flood of goals as the hosts took control, Finaghy living off scraps although their physical presence kept them in the contest.

Ronan Sludden’s delightful effort hit the angle of post and crossbar on the half hour, Ryan Hanna and Gerry McCullagh turned in some shift in the centre too, but there were no further strikes.

Finaghy were always a danger to an out-of-sorts Athletic defence, Darren Scott and Steven McDade went close and Snow was tested, but by the break it remained 1-1.

Tummery’s second half performance showed purpose, they settled quickly with the defence far more assured and comfortable – an improved Campbell and Molloy particularly good in the second period. Indeed every player was worthy of praise in an excellent second 45 which started with Tummery pressing.

Within six minutes Athletic were 2-1 up, McCaffrey dinking his effort over goalkeeper Ian Lesker after good work from Sludden. The hosts continued to dictate the pace, Mc Caffrey drove over the top and Campbell steered a header wide, as they tried to add to their tally as the weather deteriorated.

The third goal came on 72 minutes. Beacom’s effort was cleared only for Ruari Sludden to slam his shot high to the net and Tummery never looked back. Finaghy rang the changes, but there was no sting in the tail as Tummery cruised to the end.