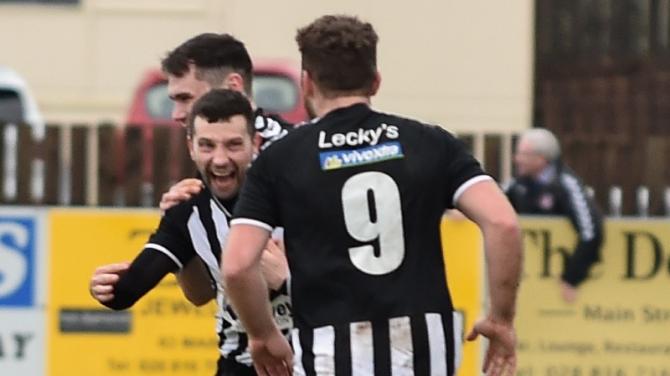 WHAT a turnaround it has been for Dergview under the leadership of Ivan Sproule.

Towards the end of 2018, the Darragh Park-side suffered an eye-watering 11 consecutive defeats, crashing to the bottom of the NIFL Championship in the process.

Fast forward to the middle of February – and with the end of the season in sight - Sproule’s charges have just brushed aside Ballyclare Comrades to chalk up their fourth successive victory.

Second-half goals by Andy Sproule and Gareth Doherty secured a deserved victory, as Dergview moved to within a single point of safety. Who would have predicted that back in December?

With 21 points still to play for, Sproule’s charges have gone from no-hopers to day-dreamers in a matter of six weeks.

Indeed, by 5pm on Saturday, it is very possible Dergview could be as high as 10th. Their next opponents are third-from-bottom PSNI, but judging by recent performances and results, Dergview are the favourites to break free from the dreaded bottom two.

Sproule is refusing to get carried, however.

“It is pleasing to see how things are going at the moment, but we know there is a lot of hard work left ahead of us,” the former Hibernian and Bristol City player said.

“I won't get carried away. I take one step at a time and as long as the team wins more games than they lose they will stand a good chance of staying up. If we start thinking we have cracked it because we have won a run of games, then we could end up with egg on our face and relegated. Relegation is still a big thing hanging over me and the players.

“We know our abilities, we know we can beat any team in the bottom six, but we have to maintain the level of performance we've been showing in training and games.

“We haven't achieved anything yet. We have won four games of football, but that's all. We are still second from bottom. No matter how well we are doing, there is still fighting left to do. There is no complacency in the group at all.

“We know every training session is as important as every game. We are putting it in Tuesdays, Thursdays and Saturdays - and the player are reaping the rewards at the moment.”

Their most recent reward was a fine victory over Ballyclare Comrades – a team that is leading the way at the top of the lower split – in a performance that underlined Dergview’s progression under the leadership of their new boss. The sides drew 2-2 in one of Sproule’s first games in charges – but on Saturday Dergview were unfortunate to win only by a two-goal margin.

“I told the players this was our first big test,” said Sproule. “I know the characters of the players, and their desire, and I looked at the highlights and I think Ballyclare only had one shot. We could have won the game by five or six with a more clinical edge. But now we have to reproduce that performance this weekend against the PSNI.”

“They had to do something to put it right, and they are fighting hard to get themselves out of it. I don’t make excuses for anyone, we are where we are for a reason. In my tenure going forward, I don’t want the club to be in this situation every season.”

Dergview are at home once more this Saturday when they take on the PSNI in a 3pm kick-off.

All support is welcome as Sproule’s side target survival in the second-tier.