'Come together to help us beat relegation' - Sproule 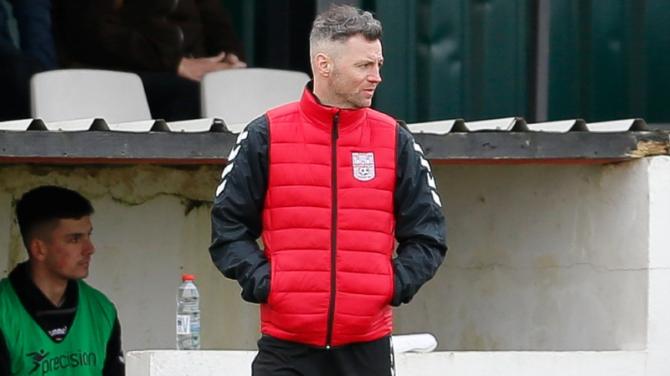 DERGVIEW manager Ivan Sproule has issued a rallying call to his players, supporters and backroom staff to give '110 per cent' and play their part in the club's battle to avoid relegation from the Championship.

Sproule watched his side lose their six-game unbeaten run on Saturday when they fell to a narrow 1-0 defeat to basement club Limavady United.

The defeat leaves Dergview precariously close to the relegation zone - they are just two points above second-bottom side PSNI and five ahead of Limavady with crucial fixtures still to play.

Sproule has called on everyone connected to the club to come together for the final four league games, to help Dergview preserve their Championship league status.

The first of what Sproule has described as 'four cup finals' sees Dergview host Knockbreda on April 6 in a 3pm kick-off at Darragh Park.

"Two months ago, we were looking at a play-off spot and even that would have been a great achievement considering how far we were behind," said Sproule.

"But over the last six or seven weeks the boys have put together a great run with five wins and a draw.

"We went into Saturday's game looking for three points but we didn't get them. For me, it was probably the most disappointing performance; it was certainly the hardest one to take.

"Limavady are fighting for their lives and deserved their three points. We can't cry over spilled milk but at the same time we had two stone wall penalties turned down against Loughgall and it was the same case on Saturday as well.

"It wasn't our best performance, but we didn't get the rub of the green. There were a lot of disappointed players in the changing room. Not many players could have came out with more than a five or a six out of 10.

"Last week throughout training our players took their foot off the gas. There were perhaps things outside outside of training that affected the team. But it's up to the players now to turn it around and get their spark back.

"Giving anything less than 100 per cent, when you are fighting in a relegation battle, and you will get caught out.”

Looking ahead, Sproule said: "We will regroup and go again. It's very much still in our own hands. With four games to play, that pleases me. You look at the best teams in the world at any sport, if they're not at your best on the day you will lose the game.

"Every team we have left to play are fighting for their lives so it's a cup final every week.

"We will get in five good training sessions before Knockbreda come to Darragh Park and it won't be a repeat of the performance we gave against Limavady.

"It's massive for us all. Nobody wants to get relegated and until you are safe you have to think about relegation. For our supporters and everyone at the club, we are not out of the woods yet. My message to everyone is: 'This is going to go down to the wire and unless everyone comes together and gives it 100 per cent we could find ourselves getting relegated this season'."