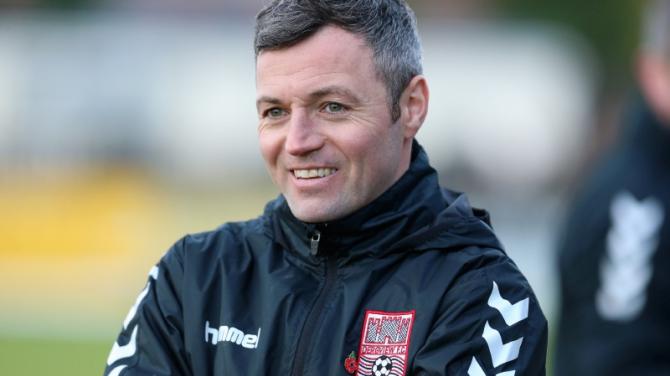 FEW people saw this coming at Christmas, but Dergview secured their place in the NIFL Championship for another season with an impressive 3-0 victory at the PSNI's Newforge Lane on Saturday to complete an Easter ‘miracle’.

At one stage in a topsy-turvy season, Ivan Sproule's side were eight points adrift of safety having lost an eye-watering TWELVE consecutive games, seven of them under former boss Peter Allen.

A native of Castlederg, Sproule marked his first five games on his return 'home' with five more defeats as the club's troubles deepened.

Against all odds, however, Sproule managed to turn the club's fortunes around, winning eight of his last 10 league games, culminating in a fine three-goal victory over the PSNI to guarantee the club's safety with one game to spare.

Andrew Sproule's deflected shot gave Dergview a 1-0 lead at the interval, before Matty Callaghan and Gareth Falconer finished the job after the restart.

"It's a relief for the whole club and personally speaking, it's nice to achieve it before the last game of the season," beamed Sproule.

"It's a weight of pressure off the players. The club went to the playoffs last season and I was there for the home leg, watching my brother go through it. It put the club under a lot of strain.  I hope we aren't in a relegation battle again next year.

"The players have overcome a mammoth task this season and we achieved safety in style on Saturday. All the credit goes to the players for pulling this miracle off. A lot of emotion poured out after the game because the players have been through a tough time.

"The players accepted the responsibility. They had been through a bad run of form, losing 12 games on the bounce and at one stage we were eight points from safety. It was a big haul to overcome, but they played for the badge with pride.

"The challenge was big for the players, but I knew the group I was taking on and I knew what we needed. It was just a matter of how quickly we could get the players in and how quickly they could gel.

"It fell into place thanks to the hard work and effort that the coaches, players and the entire club has put in. It has been a real team effort.”

Sproule stresses that he always believed his team had enough quality to beat the drop, but he was fully expecting the club’s future to be decided through the dreaded playoffs.

“I honestly never thought we couldn't get to that playoff game. I knew if I won all of my games then we were going to stay up. I prepared my team every Saturday to win, never to just pick up a point or to look at results elsewhere.”

Asked how he managed to pick his players up after such a damaging run of form, Sproule said he used his experience gained as a player himself at big clubs like Hibernian and Bristol City.

“People will always doubt you and that gave us motivation as a club. Anyone having a knock at us, I passed that to the players and it's like any walk of life, if someone is putting you down then there's nothing better than proving those people wrong.

“I used my own experience as a player to help pick the boys up during that awful run of losing 12 successive games. I was someone who had to overcome a lot of obstacles to make my career. People questioned if I could make it in the Scottish Premiership and then the English Championship and the Northern Ireland team.

“There is a bravery within the club and that bravery inspired me throughout my career and inspired this group of players.”