Give everything on the pitch and we can stun Crusaders - McConkey 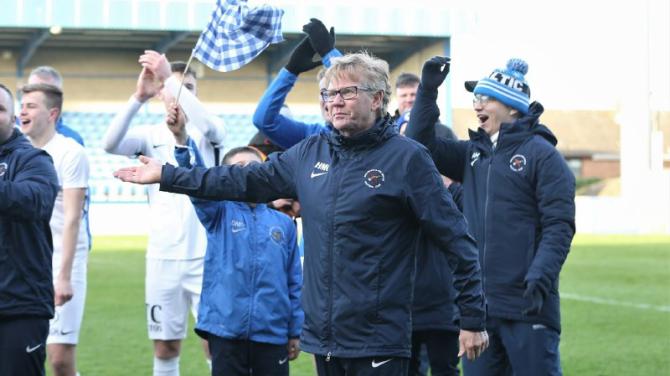 BALLINAMALLARD United boss Harry McConkey has called on his players ‘to leave absolutely everything on the pitch’ in Saturday's Irish Cup final at Windsor Park.

The Championship side are pitting their wits against the formidable Crusaders and if they were to emerge victorious it would be one the biggest shocks in the history of the 139-year competition.

The eyes of the whole country will be firmly fixed on the Mallards as they take on the might of Stephen Baxter’s side in a contest that is being likened to ‘David versus Goliath’. The showpiece final will be screened on the BBC from 2.10pm and there is expected to be a mass exodus from the Fermanagh village to the National Stadium.

McConkey’s unfancied men have already knocked out top-flight teams Dungannon Swifts and Warrenpoint Town in the quarter-final and semi-final respectively to make their first ever Irish Cup final, but the general opinion of the public is that to beat Crusaders is asking too much.

Ballinamallard concluded an underwhelming Championship campaign with a 5-0 home defeat to champions Larne on Saturday, while Crusaders – runners-up in the competition in 2012 - warmed up for the final with a 3-0 victory over Premiership runners-up Ballymena United.

Their task is made even more difficult as they are without Josh McIlwaine, who was given a three-match ban after receiving a straight red card in a recent match against Carrick Rangers, and Republic of Ireland U17 player Sean McEvoy, who is on international duty.

However, despite their long odds to topple Crusaders, McConkey believes his side have every chance of pulling off an almighty upset if they play at their very best level. They will be boosted by Crusaders’ recent poor run of form, with Baxter’s charges having gone five games without a win until Saturday’s comfortable triumph, and McConkey insists they do have weaknesses.

"There is no doubt that their team is full of quality players,” said McConkey. “We played against them earlier in the season in the League Cup and I thought we played extremely well. In fact, we went 1-0 up and with a short time to go they threw on [Rory] Patterson and Jordan Owens from the bench. In the last couple of minutes, from two set-plays, they undone all of our great work.

"They have quality individuals and you may well get your game-plan right and keep yourself in the match, but they have the ability to unlock the doors. I think they were very good against Ballymena on Saturday and that will have given them a lift because they have had a few stuttering results leading up to that game.

“However, when we are on the front-foot we can cause problems for a lot of teams and when you have experienced players like Ryan Campbell, who is a renowned goalscorer, and the cleverness of Aaron Arkinson, you always have a chance.

“Crusaders do have a few weaknesses. I believe they aren't so comfortable while under the cosh as they are on the front-foot.

“I think the secret to this game is to try to keep their presence out of the box. Jordan Owens is a massive player for them and they play everything through him. If you let them into the box, with his aerial dominance, it's a dangerous place to be.

“They will have a game-plan and they will do their very best to executive that. We will do our best to nullify them and exploit the weaknesses that we see in their team.”

The Mallards travelled to Windsor Park for a ‘familiarisation session’ earlier this week to get a feel for the pitch, an exercise that McConkey said was thoroughly enjoyable, and he feels it will help his players to cope with the nerves ahead of what is undoubtedly the biggest game of their lives.

“They have a visualisation now of what Windsor Park is going to be like on matchday.

“The countdown is a bit like Christmas! I want the players to be a little nervous, but there has to be a balance and you have to control it. We have experienced players and they will be invaluable on the day, but the youngsters have that wonderful ability of not being scared of anything.

“This will probably be the biggest game for all of them, in terms of the size of the crowd, publicity and TV coverage. We have to leave absolutely everything on the pitch. After that, our conscience is clear.

“The most important games aren’t always the most enjoyable, it’s hard to enjoy it when there is so much banking on it, but for us, we must try to relish the opportunity to be on this stage.

“My ultimate task is get the most out of the players on the day and if it’s not enough, then so be it. As long as we give it our all, that’s the main thing.”

As a youngster, Fermanagh native McConkey won the Junior Cup with Lisbellaw United in 1978. He went on to play for Glenavon, Dungannon Swifts, Chimney Corner, Coleraine, Carrick Rangers, Ballyclare Comrades, Ballymena United, Larne and Ballinamallard, but he stresses Saturday’s cup final will be the pinnacle of his career.

He will be joined by family members in Windsor Park and wouldn’t it be a dream for him if he was able to celebrate an historic victory with his loved ones at the full-time whistle.

“I expect there will be a mass exodus from the village, but there will be a lot of people from within Dergview and other clubs right across Tyrone and Fermanagh. There are also a lot of neutrals who will have our support.

“The supporters made the difference in the semi-final, I had goosebumps on the back of my neck and I have never experienced such vocal support before. I want them again to represent the club in a positive light. Enjoy the occasion and take pride in the fact that we are in the Irish Cup final, at the National Stadium.

“Over the years, I have preferred that my family don’t come and watch me out of fear of letting them down, but they managed to sneak in for the semi-final and they have a bus booked for the final.

“It’s lovely to have those closest to you to enjoy these special moments and I have no fear of letting them down on this occasion. I’m delighted they will be there.”