End of the road for Tummery's treble aspirations 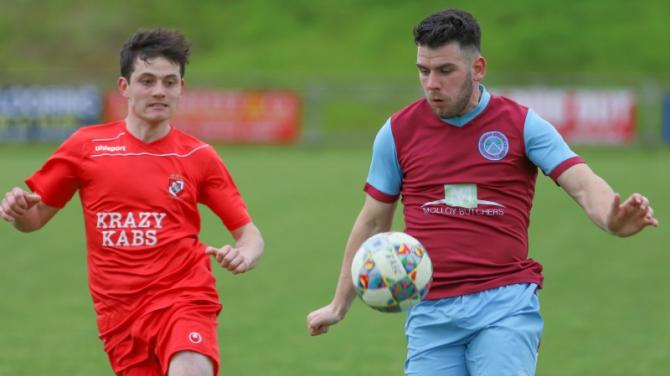 TUMMERY Athletic’s long pursuit of the Mercer League title and an incredible treble came to an agonising end on Monday night when they were held to a pulsating 2-2 draw by champions Enniskillen Rangers.

Remarkably, Gerry Love’s side are still unbeaten at the business end of the season and remain on course for what would be a hugely-impressive double in the shape of a Mulhern Cup and Irish Junior Cup.

However, their league challenge has been hamstrung by a punishing fixture list in which they have negotiated five games in just nine days.

Admirably, the Dromore side pushed Rangers all the way on Monday night but they didn’t have enough in their legs to earn what would have been a crucial victory.

It means they are now six points behind Michael Kerr’s side with just one league game remaining.

Athletic got off to a great start when Aidy McCaffrey’s corner was met by a diving header from Ryan Hanna to give them the lead with only 90 seconds on the clock.

Rangers got back on level terms after a mix-up in the visitors’ defence, however.

Athletic had a great chance to get back ahead when Emmet McNabb robbed the Rangers full back on the byline and was racing goalwards when he got hauled back, but their strong penalty appeals were denied.

Love’s men started the second half brightly and restored their lead when a Ruari Sludden corner was met at the back post by Blaine Campbell and his looping header landed in the net.

For the remainder of the game Tummery were in control. However, Rangers levelled against the run of play when Jason Keenan grabbed a cruel equaliser, a goal that ultimately ended Tummery’s title hopes.

Gerry has admitted the congested fixture list played a major part in their failure to land the trophy, but he has offered his congratulations to Enniskillen Rangers.

“It has been a long season, given the punishing schedule we had. It's amazing to be still unbeaten at this stage considering the amount of injuries we've had. It's a fantastic achievement, but there are no trophies to date, however, I am delighted with their commitment and effort.

“The fixtures at the end of the season didn't do us any favours. We have put together a level of consistency which is pleasing for any manager. We've scored goals and been defensively sound.”

He added: “For Rangers to retain their title is a fantastic achievement for Michael and Tony and the players. I would like to offer them my congratulations.”

Looking ahead to the Mulhern Cup final with NFC Kesh this Friday night – a match played at Ferney Park, Ballinamallard – Love is hoping some of his key men can shrug off injury doubts. Cathal Beacom and Aidy McCaffrey are amongst a group of players who are struggling for fitness.

“We are disappointed we have picked up more injuries. The fixture list has been absolutely crazy and ridiculous. I won’t know who is and who isn’t available for Friday night until closer to kick-off.

“To ask any team to play five games in a nine-day period is absolutely crazy. It doesn’t help anyone. There is absolutely no time for recovery.

“I’m expecting everyone who is representing Tummery on Friday night will give 100 per cent, however. They are a fantastic group of players so we won’t be lacking in terms of commitment and effort.”

Tummery Athletic are awaiting to hear the outcome of an IFA investigation into the alleged playing of an ineligible player by their Irish Junior Cup opponents Bessbrook United in the 3-1 semi-final victory over Enniskillen Rangers on April 1.

The IFA are to hold a meeting tonight (Wednesday). The final was originally scheduled to be played on Monday but it has been postponed to Saturday, May 18.