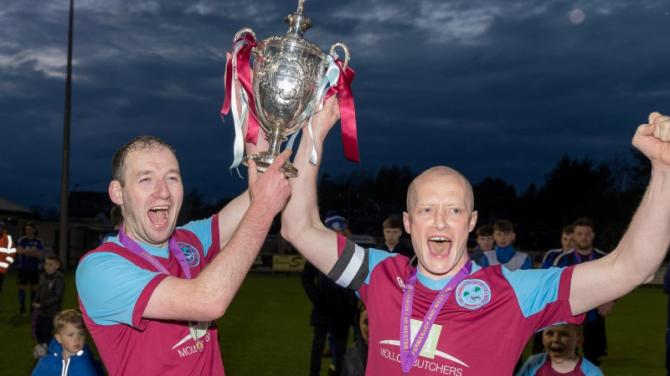 For manager Gerry Love, it was the perfect response to losing the Mercer League title following a 2-2 draw with Enniskillen Rangers last week.

It is also a timely boost for Athletic ahead of their rescheduled Irish Junior Cup final against the same opponents this Saturday, following the IFA's decision to reinstate the Fermanagh club into the knockout competition after a meeting of the board.

Breaking the deadlock, Molloy converted from Aidy McCaffrey's corner delivery with a textbook header to give Tummery the lead after 23 minutes.

Set-pieces were the undoing of Kesh once more after the restart when another McCaffrey corner caused chaos in the box and this time Campbell headed home.

Tummery saved the best for last when McNabb struck a thunderbolt from 30 yards into the top corner, giving Kesh shot-stopper Ross McClelland no chance.

The cherry on the cake was the return of club captain Gerard McCullagh, who came on as a late substitute to lift the cup, having recovered from injury.

While Tummery can now look forward to another cup final, Kesh are on the hunt for a new manager after highly-respected Nicky Noble announced his resignation following the match.

Speaking to the Tyrone Constitution, manager Love paid tribute to his friend Noble and spoke of how proud he was of his Tummery players to have landed their first trophy of the season.

However, he has blasted the IFA once again for what he has described as their ‘shambolic’ handling of the Irish Junior Cup final, which is due to take place at Windsor Park on Saturday.

“I am pleased for the club to have retained their trophy,” said Love. “It is important to have that consistency and it’s a competition we hold in high regard.

“It was important we got the win but it was also a decent performance. Kesh were always going to make it difficult for us - and it was very nip and tuck at the start of the game.

“It’s difficult to deliver a spectacular performance in any final, and there were areas in the pitch where we had to nullify them - we did that. Overall, for me, it was a decent display.

“I think we scored the opener at the right time. Had it not gone in, it could have been a different game.”

Love has been impressed by his side’s ability to handle such a congested fixture schedule, but he added: “I’m not impressed by the person who gave us such a fixture list!

“You cannot sustain a level of performance when the body is taking on such a serious battle.

“We’ve had groin strains, hamstrings - it has been an incredible effort from everyone.

“The players have had to go to physio and it’s all money - and we are only a junior club. It has been an expensive campaign.”

Kesh manager Noble broke news of his resignation to his players after Friday night’s defeat, bringing his two-year spell in charge at the club to an end.

“He is someone I have known for a long time,” said Love. “He is a lovely fella and he has done an awful lot for Kesh on and off the pitch.

“Prior to our game with St Oliver Plunketts in the quarter-final, I had a lengthy conversation with him and the insight he provided me with that day helped us to win that game, so I am indebted to him for that.”

Tummery were due to meet Bessbrook United in the Irish Junior Cup final on Bank Holiday Monday (May 6).

However, Enniskillen Rangers have been reinstated to the competition after Bessbrook were found to have played an ineligible player, namely Conor Sloan, in their 3-1 semi-final victory over Rangers.

In a statement released last Thursday, the IFA said: “At its meeting last night the IFA Board considered written submissions from Bessbrook United FC and the Carnbane League, in addition to hearing directly from the IFA Junior and Youth Cup Committee regarding the eligibility of Conor Sloan (Bessbrook United FC) to play in the semi-final tie of the fonaCAB Junior Cup, which was played at Lakeview Park, Loughgall, on Monday, April 1, 2019.

"Members were satisfied that Mr Sloan was not registered to participate in organised football in accordance with the Irish Football Association Amateur Game Player Registration Regulations at the time of his participation in the semi-final tie v Enniskillen Rangers FC on April 1, 2019.

“The player was therefore ineligible to play in this fixture. In accordance with Rule 4 of the Junior Cup Rules, Bessbrook United FC are removed from the Junior Cup and Enniskillen Rangers FC reinstated.

"Bessbrook United FC have the right of appeal under the IFA Articles of Association, and without prejudice to the outcome of any appeal, Enniskillen Rangers FC and Tummery Athletic FC have been advised to prepare for the Final tie of the Junior Challenge Cup at the National Football Stadium at Windsor Park, Belfast, on Saturday, May 18, 2019."

The decision has not impressed Love. “No one can fathom how Enniskillen Rangers are still in the competition,” he said.

“My focus has been on Bessbrook, who, as far as I have been concerned, were our opponents in the final. In terms of preparation, it hasn’t been ideal.

“It is absolutely shambolical. In terms of the game going ahead this Saturday, I’m not so sure. They have put out these dates, but my understanding is that Bessbrook will be appealing it, and who knows what comes of that appeal.

“Unfortunately for us, we have to prepare by booking coaches, booking in for a pre-match meal - it is not ideal.

“After beating Willowbank it was a fantastic occasion, and we were all looking forward to a final on the Bank Holiday. Unfortunately, that was all taken away from us.”

For a full match report and more photographs of the Mulhern Cup final, see pages 54 and 55.