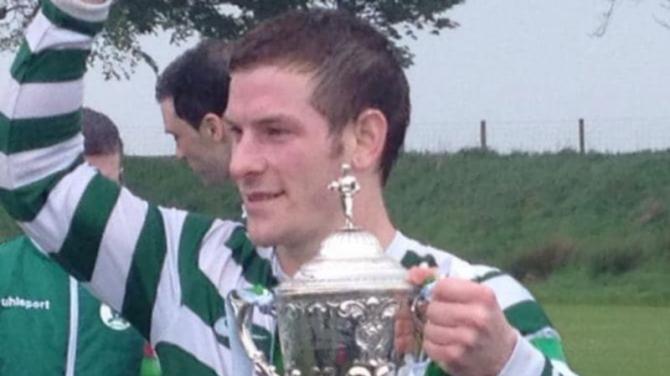 STRATHROY Harps have announced that talisman Darren Teague will be the club’s new player-manager for the forthcoming season.

Teague, 32, re-joined the club in January after a short spell at Ballinamallard United but didn’t feature consistently due to work commitments under former boss Benny McElholm.

Going forward, however, the Omagh man will juggle the role of player-manager and he has confirmed that he has no intention of hanging up the boots just yet.

A prolific winger, Teague has won a host of trophies as a player with the Harps and it will be his challenge to lead the club back to their glory days in his new role.

“The committee approached me – they thought it was good to keep the job within the club,” said Teague

“I hope to be able to bring in a few players and I’ll be playing fully, as well as my brother Damon. We hope to kick on now.

“I have good background staff behind me and I hope to add as much as a player as I will as a manager.

“Over the last couple of seasons, through work commitments, I haven’t been able to give it my all for the Harps. I’ll definitely be leading by example on the pitch, first and foremost.

“Damon didn’t play a lot last year through injury, but he’s back playing and will be a big player for us next season.

“I have already made my first signing in Niall McCaffrey from Dunbreen Rovers. He has been flying over the last couple of seasons and it will good to see him step up in level. I have a few more new signings to make and they will be announced in due course, after a few more phone calls.”

It is understood that centre-back Micky Logue will also be joining from Dergview, but Teague added: “I’m really happy with the squad we have, it’s just that the boys got a wee bit lost last season due to one thing or another.

“If I can bring the boys together, add a couple of new faces, then we should kick on big time.”

Enniskillen Rangers are the team to beat at the moment, having successfully retained their title earlier this month, and it’s Teague’s ambition to push them closer next season.

“We want to climb up the table and add a few more cups. Within the club, it’s about bringing a wee bit of happiness to the boys again. I feel we should definitely push for the title.

“The key to football is enjoyment and I want to bring the feel-good factor back to the club.”

Perhaps Teague’s most difficult challenge is bringing the goals back to Strathroy.

“We lost quite a lot of goals last season, but between Damon and I, we hope to hit 30 to 40 goals at least.

“I would like to think we will hit double next season. There are a lot of good players in the club, but they lacked confidence last term.”

“I would like to thank Benny for the work he has carried out at the club.

“I would like to wish him well - best of luck to whatever he decides to do in the future.”