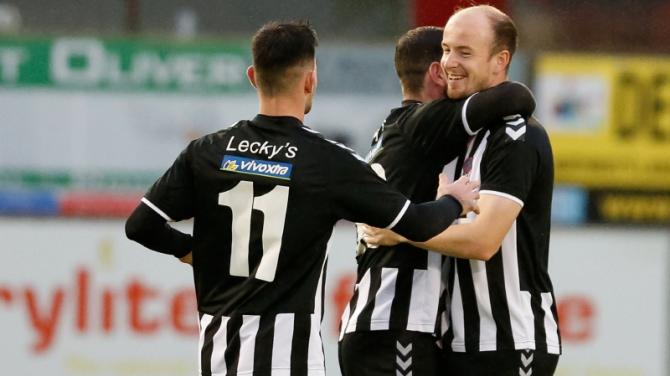 DERGVIEW boss Ivan Sproule has issued an appeal to the club’s supporters and players as they prepare for their biggest game of the season on Saturday.

The Castlederg men have won three on the bounce and welcome Championship leaders Portadown to Darragh Park in what is sure to be a difficult task.

Sproule has once again asked the fans to turn out in large numbers as his side aim to inflict a second defeat of the season on Matthew Tipton’s side.

He has also challenged his players to maintain the same level of performance that has saw them defeat Ards, Tobermore United and most recently, Newry City.

“Matthew has carried out a fantastic job since he has become a manager,” said Sproule. “He got Warrenpoint promoted and he was doing well in the top-flight with them. He’s an excellent manager, a real thinker. I’m not surprised Portadown are where they are in the league.

“They’re another big challenge for us. You have to look at the population of Portadown compared to Castlederg - they’re a massive club. But we should embrace it as a club.

“We have been strong at Darragh Park this season, picked up a lot of points there already.

“I said at the start of the season that Darragh Park has to be a fortress for us and I don’t think any other club likes coming here.

“We play a different style of football here, we go for it a wee bit more at home.

“Certainly this season, it’s where we want to pick up the majority of our points. I’m glad we have been hard to beat this season.

“We will go in as underdogs on Saturday and we will approach it in the right manner.

“They are top of the league, we are mid-table, but we will always go for the win.

“People might say that’s over ambitious, but for me you have to win your home games in this league.

“They are top of the league on merit, and it’s going to be very difficult, but I won’t be sending my players out for anything less than three points.

“They’re going to have to give their biggest performance of the season, but I have every confidence that if they apply themselves they can win the game. It’s our biggest match of the season so far.

“The crowd will play their part too, they will be in fine voice. Portadown will bring a large following, they’re top of the league and they will be strong favourites to get promoted this season.

“As a footballer, you want an atmosphere in your ground and both clubs will get that on Saturday.

“My message to everyone in the club is to get out and support us on Saturday. It’s a massive game, in a hard, competitive league. Anyone can beat anyone, from the bottom of the table to the top.”

Unfortunately, Blaine Burns is a doubt for the match, but Dee McNulty and Graeme Young should be available.

Last Saturday, Dergview made it three wins from three across all competitions following victory over Newry City at The Showgrounds.

Following a defeat of Ards in the league last Saturday and then Tobermore United in the North West Cup during the week Ivan Sproule's side continued their recent run of form with the opening goal via Paul Smith on 13 minutes, his second strike in four days.

Newry levelled just before the break through John McGovern, his second goal of the campaign, but Simon McGlynn restored Dergview's lead two minutes into the second half to ultimately seal the points for the visitors.

For Sproule, the club is now on the right track once again,

“The boys have turned it around again,” he said.

“It has been a strong week, in terms of both performances and results. We needed those results.

“It has put us back on track to where we want to go.

“Saturday was a strong performance away from home, something we needed to put right.

“We had lost our previous four games on our travels, and that was a record we needed to right as quickly as possible. It was a difficult task to go to Newry and do that, but the boys responded with probably their best performance of the season.”

More on Dergview on page 61