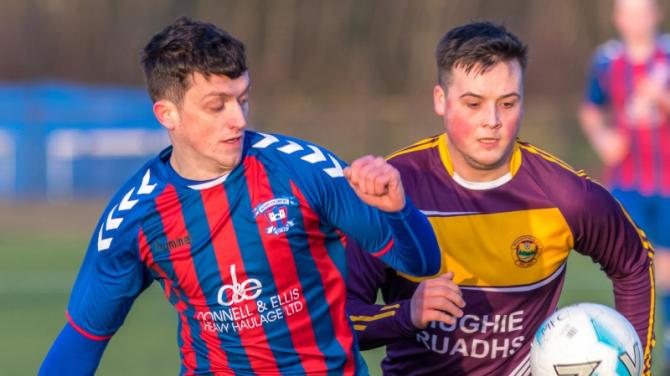 MOUNTJOY United boss David Gilfillan says his side needs to win their last six remaining games to secure promotion back to Fermanagh and Western’s top tier.

Gilfillan watched his men throw away a two-goal lead to lose 4-3 to title rivals Mountfield on Saturday as their slump in form continued.

Having made a flying start to the campaign, winning five games from five, Mountjoy have now won only one of their last five and are out of the promotion spots, six points behind leaders Mountfield.

Not to be beaten, Mountfield played with much more intensity after the restart and with the second half only seven minutes old, Adrian Kelly had pulled one back.

Nathan Donnelly levelled the scores with 15 minutes remaining but then Mountfield had a man sent off when Emmet McFadden was punished for a late tackle.

Despite their numerical disadvantage, Mountfield pushed on and led five minutes later when Dan Tuohey completed a nice team move.

Donnelly put the game beyond the reach of Mountjoy with a late header, although Andrew Gilfillan scored a late consolation for the visitors, before home player James Carlin was then shown his marching orders after an incident off the ball.

“They wanted it more than us in the second half,” said Mountjoy manager Gilfillan. “We didn’t show up for the fight and rolled over too easily.

“They scored three headers - we didn’t do the basics well and that’s what has cost us.

“The most disappointing thing is that they had a man sent off at 2-2, they looked fresher and hungrier than us.

“A draw away from home would have been a good result, but it wasn’t to be.

“If we win our last six games - and we would back ourselves to do that - that will be enough for us to go up.

“We cannot afford any more slip-ups.”