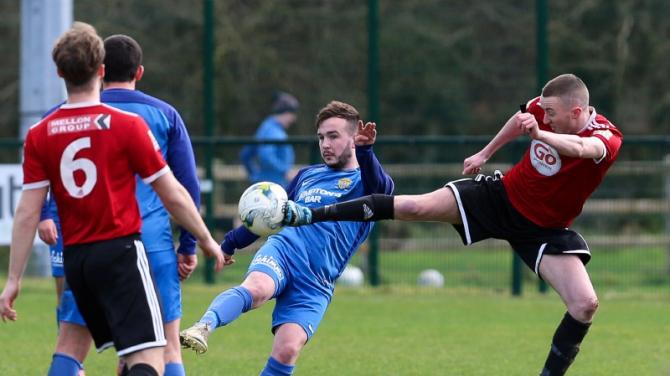 ARDSTRAW boss Nigel Boyd hailed his side’s latest victory as an “important” one.

A convincing win over Maiden City has propelled Ardstraw to the top of the table after five games.

However, just seven minutes later City were level. An excellent pass from Kealan McDermott released Dylan Mooney and the attacker made no mistake finishing past Gailey.

Ardstraw suffered a further blow as McKelvey was forced off through injury.

Both teams went close before the end of the half - Dylan Russell and Robbie Godfrey for Ardstraw and Ryan McCaul for Maiden City.

Gailey mades a brilliant save to stop Maiden City taking the lead after the restart, and the visitors then had a goal ruled out for offside.

They were made left to rue their missed oportunities as a flowing move between marauding fullback Ben Robinson and Godfrey resulted in Ardstraw’s second goal, with the striker showing great awareness to square the ball for the onrushing Russell to score.

Kyle Mills’ clearance then released Godfrey, and the striker made no mistake one-on-one with Muldoon to make it 3-1.

Ardstraw were awarded a penalty when Godfrey was fouled in the box. Russell’s penalty was saved, however, Darren Boyd reacted quickest to the rebound only to see his effort come off the post.

It mattered little, however, as Russell won the ball, dribbled past two defenders and played William Donaghy through on goal to make it 4-1.

From an Ardstraw free=kick Jamie Robinson's headed clearance was met on the volley by Richadr Rihane on edge of the box, to score his first goal for club to make it 5-1.

Maiden City managed to pull two goals back in the last five minutes to take the shine off Ardstraw’s performance.

"It was a very important win for us and I'm delighted for the players,” said Boyd.

“It was a week where our squad was really stretched so I'm especially pleased with the performance of the younger lads. At 1-1 it looked like the game could have gone either way so the third goal was vital, we scored a very good goal and then for a 20 minute spell we blew them away. Our attacking play was excellent and we were clinical in front of goal. We'll take the positives from the performance and turn our focus to Newtowne away on Saturday.”