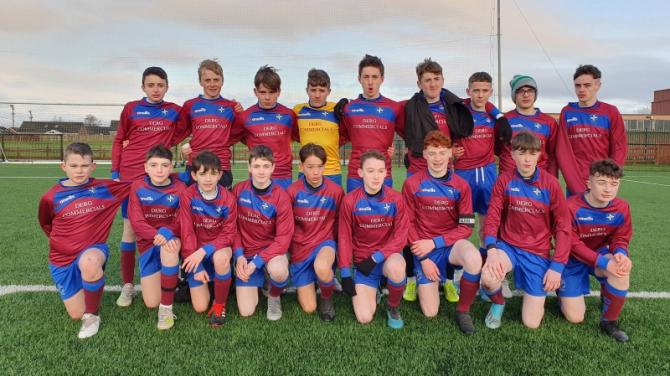 OMAGH CBS’ under 14s fired themselves into the semi-finals of the Schools’ Cup last week with an entertaining 5-0 win against St Brigid’s at the Brandywell Stadium.

The scoreline would suggest otherwise, but this was anything but easy for the Omagh men and they had to put in a solid performance to come away with the win against a dangerous St Brigid’s side.

At a blustery Brandywell Stadium, the opening exchanges were fairly even, with both teams getting used to the big pitch and settling into their surroundings. It took around 15 minutes for the first real sight of goal for either side as Charlie Donnelly tried his luck from distance, flashing his shot narrowly over the bar. The CBS settled well after this and Paudi Dillon and Callum Daly began to gain control in the middle of the park alongside Reece McAleer, and Donnelly and Tom Pap-Gavin were causing problems through the middle.

St Brigid’s were always dangerous on the counter, and their left winger, in particular, was proving to be a threat every time he got the ball, but he was marshalled superbly well by Oisin Teague and Nathan Farry. As the half wore on the CBS were more controlled in possession and were looking more threatening going forward and they were rewarded on 25 minutes. Donnelly picked up a pinpoint pass from Farry on the right side of the box and weaved his way past two defenders before firing a low drive inside the near post to give the CBS a deserved lead. For the remainder of the half the Omagh men were in control but were unable to add to their lead.

St Brigid’s made some tactical changes at half-time and in the opening 10 minutes of the second half the CBS found themselves under pressure as St Brigid’s created some good chances. Their best chances fell to their frontman who blazed over when well placed inside the penalty box and saw a second effort well saved by Aidan Colton, before the rebound fell to another St Brigid’s player and this time it was well blocked by Farry. The CBS weathered the storm and soon adapted to the new tactical approach from St Brigid’s and started to exert some authority on the second half.

Farry and Dillon Chism were in control at the back and Charlie McCrory was looking assured in possession and showing some nice touches going forward. The CBS found themselves two goals to the good 15 minutes in as Donnelly was played through by Dillon and the frontman made no mistake as he calmly slotted the ball into the bottom corner.

From this point the Omagh side never looked back as they grew in confidence as Sean Broderick saw a shot saved, but they were further ahead four minutes later when Pap-Gavin fired a shot from the edge of the area which deceived the home netminder and found its way into the net.

Twenty-five minutes into the second half the game was over as a contest as Donnelly picked the ball up and drove towards the penalty box before curling an unstoppable effort into the top corner from the edge of the area to complete his hat-trick. The Omagh men weren’t finished there as Pap-Gavin slotted home Ben Kelly’s cross after an excellent team move to add some gloss to the scoreline.

All in all, a good performance for the CBS against a strong St Brigid’s side and a place in the last four as the boys now look forward to the draw for the semi-finals of this year’s Schools’ Cup.