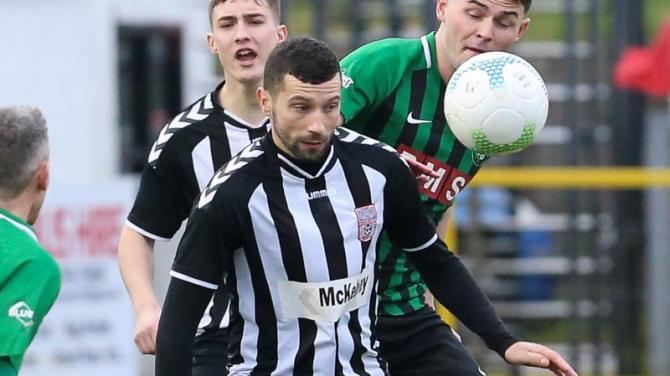 AFTER three weeks of inactivity due to the coronavirus crisis, Dergview's Andrew Sproule is clearly desperate for action to resume - as he jokes he is considering playing until he is 50!

Dergview have had a disappointing season, as Sproule admits, and were six points above the bottom two in the NIFL Championship when the league was called to a halt.

And although he believes Dergview's battle to beat the drop would "go right to the wire" if the season was to be concluded, he insists he can't wait to get back playing football.

"The season has been disappointing," he acknowledged. "You always want to be fighting at the other end of the table.

"With the league splitting, you want to be in the top six. I feel if we keep this squad together and strengthen it with the right players we could challenge any team. We've already proved this season we can beat anyone in the top six but consistency has let us down.

"What has pleased me are the players that we have signed and how well they have fitted into the squad. A special word of thanks to the constant support from the fans who always back the players and the club through the good times and the tough times."

With just a handful of games remaining before the league was due to split, Dergview were still dangerously close to the relegation zone. But after an upturn in form, the club appeared to be heading in the right direction.

Whether the league is played to a conclusion or ruled null and void is up for debate, but Sproule believes Dergview have what it takes to survive.

"It will probably go to the wire - no team lies down in this league. It can be hard to call games as anyone can beat anyone. We as players always believe we have what it takes to stay in the league - but you have to earn it to stay in it."

When asked if he believes whether the league would resume, Sproule said: "It is hard to call. Everyone's health and safety is obviously of utmost importance and is first priority. If the time is right and games can run safely again then hopefully it will get it up and going. It has made me see what retiring might be like - I think I'll play until I am 50!"

After a frustrating start to the campaign after suffering a hamstring injury, Sproule worked hard to improve and came back stronger than ever. And, with many players also dropping out of the squad due to injury, he even developed a new position at right-back.

"I've enjoyed playing a new role which is more defensive than attacking. I've tried to implement the defensive styles I hated coming up against as a winger."

That Sproule settled into his new position is a testament to the hard work of the club's coaching staff.

"With the coaching staff of Gareth, Wes and Liam, training is first class every week and everything is to a very high standard. You'd go far to get better coaches than we have. They put in a lot of extra work behind the scenes to make sure both them as coaches and we as players are constantly improving."

And how is it to work under his brother, Ivan, as manager?

"Ivan doesn't do anything by half measures - he gives everything 110% and leaves no stone unturned.

"We've been through good times and bad times together in life and in football.

"We are always brutally honest with each other. I know if I let my standards drop he'll not shy away from telling me the truth, it's the way we are as a family!

"But there's one thing for sure - we both have the same vision and that's to take Dergview FC into the Irish Premier League!"