From Fintona to Espania 82, Gerry showed the world what he could do 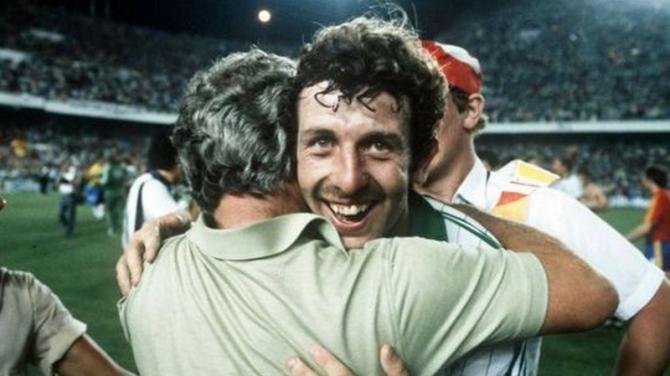 'GERRY Armstrong drives it through the goalkeeper and through the defender's legs for the 100th goal of this World Cup and what could be a priceless one for Northern Ireland'.

The unforgettable words of BBC commentator John Motson at Estadio Luis Casanova in Valencia when describing the finest moment in the history of football in Northern Ireland.

Armstrong, then a Watford player, had just scored in the 47th minute to give Billy Bingham's side a 1-0 lead over the hosts Spain. And it would prove decisive as the Green and White Army held on to claim their place in the knockout stages of the 1982 World Cup despite having a man sent off.

With just a lash of his right foot, Armstrong united the whole of Ireland with his second goal of the tournament. It meant they topped a group including Yugoslavia and Honduras.

Their giant-killing exploits prompted 300 telegrams with messages of congratulations from home, from the Reverend Ian Paisley to the Irish Taoiseach in Dublin, Charles Haughey.

But the proudest of them all was Fintona man, Gerald Armstrong, who watched on with admiration as his son made an interception, sprinted from deep inside his own half into the opposition's, switched it wide to a teammate before positioning himself perfectly to effortlessly smash the ball past goalkeeper Luis Miguel Arconada when the ball fell into his path. A goal that has been watched countless times ever since.

It is a goal that epitomised some of Gerry's best attributes: athleticism, determination, graft, raw pace, brute strength, vision - and composure. Characteristics inherited from his hardworking father, a sprinter back in his day, who grew up on a farm at Aughafad in Fintona. Traits that helped Gerry form a long, successful and an adventurous career, leading him to:

* Play with all-time greats George Best and against Diego Maradona

Like his father, Gerry was a tireless hard worker. Gerald put his graft into the fields of Fintona; Gerry used his on football pitches all around Europe.

Gerry earned his own luck and his ability was unquestionable. And yet he doesn't shy away from the massive part his father played in his career.

"My family was all very athletic," said Gerry in an exclusive interview with the Tyrone Constitution.

"My brothers Kevin and Sean both played for Antrim; Eugene was a good footballer - he was a winger and he was very fast.

"We got the pace from our father. He was a sprinter when he was young and there weren't too many who could have got near him! My sisters were good runners too. So we had very good genes."

Pace and hard work weren't the only aspects of Gerry's game, however. An extremely talented GAA player, Gerry played for Antrim's senior team as a 15-year-old and has fond memories of playing in an Ulster final against Tyrone's Mickey Harte.

Gerry spent many of summer on his family's farm at Aughafad in Fintona and he fondly remembers even scoring a few points for the GAA club in the village!

The physical nature of the GAA gave him an advantage when he finally found an interest in football in his late teenage years. He had only been playing a short while for Bangor FC when some of the biggest clubs across the water began to show an interest, Tottenham and Arsenal included. Having only been playing the sport for a matter of three years, Gerry would sign for Spurs, making his debut for Terry Neill's side in a 3-1 defeat to Ipswich Town on August 21, 1976, at the age of 22.

He soon caught the eye of then-Northern Ireland manager, Billy Bingham, and made his debut playing up front alongside George Best against West Germany. It would be the start of a very special period in his life.

Northern Ireland has only qualified for three World Cups in their history - and it speaks volumes of Gerry's quality that he was involved in two of the squads, also helping his country to Mexico in 1986.

"I've had great memories in football but the Spain victory was the best," reflected Gerry.

"They were the host nation and the favourites for the World Cup so to beat them against all the odds was incredible. No one had given us a chance really, except ourselves and a few fans. We believed we could do it.

"That particular squad was special. I don't think there was a better squad assembled by Northern Ireland.

"We went into Spain's back yard and beat them comfortably in the end. We were very solid and we could have gone a bit further. Martin O'Neill had a great goal disallowed in the quarter-finals against France when it was 0-0. The linesman overruled it for offside; it wasn't. But listen, that happens in football.

"People say West Germany would have beaten us in the semi-final had we got there. But you don't know that because six months later we played them and beat them 1-0.

"We had a bunch of lads who could surprise and scare the life out of a lot of people."

Jose Santamaria, Spain's coach at the time, was certainly caught by surprise.

"We dominated from beginning to end and had the misfortune that in one counter-attack a goal was scored against us," he lamented after the game.

But there was nothing unfortunate about Spain's defeat - Northern Ireland deserved to win the game and the winning goal is a moment Gerry will never forget.

"It just felt so surreal. We knew we weren't going to get many chances," said Gerry.

"I remember covering a lot of ground but I won the ball back in my own half. I remember Periko Alonso trying to kick me but I got past him and gave the ball out wide to Billy Hamilton.

"You follow your instincts and my instincts told me to get into the box. Billy put in an unbelievable cross. I spoke to Billy about it and he was just hoping someone would get on the end of it and we got a wee bit lucky when Arconada, who was such a good goalkeeper, pushed it out to me.

"I kept it low and I remember there was a deafening silence because there were 50,000 in the stadium that night, and the Spanish weren't going to cheer! But there were about 350 Northern Ireland fans there that night.

"The rest is history, as they say."

The 1982 squad was undoubtedly talented and their achievements speak for themselves. But it's often wondered what the inclusion of a fully fit George Best in his prime years would have meant.

Best was playing for San Jose Earthquakes in the United States and at 34, was on the downside of his legendary career when Bingham overlooked him for the squad.

In Gerry's opinion - and he has played on the same pitch as Maradona and commentated on Leo Messi and Cristiano Ronaldo on a weekly basis for Sky Sports - George was the Best.

"He was unbelievable. I remember training with him for the first time. We were in Frankfurt in Germany. I was just glad he was on my team. When I was told I would be starting up front with him for my debut, all my dreams had come true.

"He could do things I've never seen anyone do. He just loved football; he had a great left and right foot, and he could head a ball. He had unbelievable dribbling skills, he was like a ballerina. His body movement was incredible.

"He had defenders going one way and he would be going the other. He would put the ball through your legs, play one-twos off your shins. He was just sensational, and I was just in awe.

"George was a really lovely guy too. He was a big movie buff and we would talk a lot about films. He loved music too. He was nine or 10 years older than me but I found him and Pat Jennings fantastic figureheads for me. They looked after me."

Playing with George Best is just one of many highlights in Gerry's story. From partying with Elton John, to drinking with Maradona, it has been quite the journey.

There is no doubt that Gerry's bubbly personality and character has created many opportunities for the Belfast boy. He enjoyed the most impressive career in the media when he hung up his boots and was the voice of Sky Sports' LaLiga coverage for almost two decades.

He has also enjoyed two stints as assistant manager of Northern Ireland - first under Bryan Hamilton and later with Lawrie Sanchez, where he helped to mastermind the victories over England and Spain in 2005 and 2006.

Now in lockdown, Gerry is passing the time by holding question and answer sessions on Facebook, where he takes questions from supporters. One line of questioning is what lies ahead in his future, but whatever it brings, whether that is punditry or whatever else, Northern Ireland fans will never forget John Motson's commentary... "ARMSTRONG!"

Valencia will always have a special place in his heart - but so will the small village of Fintona.