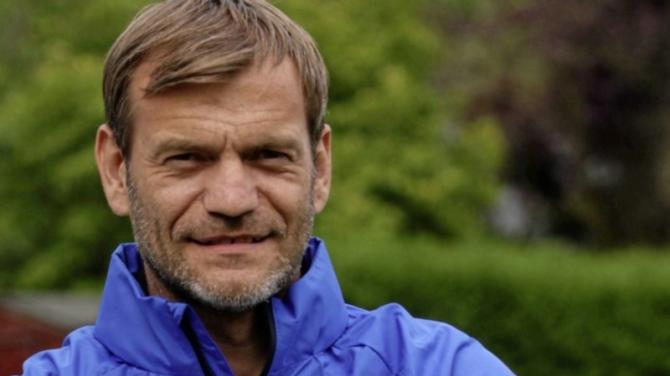 Former Fivemiletown and Ballinamallard United goalkeeper, Roy Carroll, has revealed his dreams of helping to develop the next Northern Ireland goalkeeper.

In an extensive and honest interview with the Tyrone Constitution, Carroll - who won the Premier League and FA Cup during his time with Manchester United under Sir Alex Ferguson - also spoke of his ambition of landing a coaching role with the Northern Ireland national team in the future.

Carroll enjoyed an unforgettable career in football, having secured a move to Hull City while playing for Ballinamallard in 1995. He would join Manchester United, playing 72 times for the English giants, having impressed at Wigan Athletic.

The Tamlaght man won 45 caps for his country and ended his international career on a high after being named in Northern Ireland's remarkable Euro 2016 squad.

In the summer of 2019, Carroll suffered a serious knee injury while playing at Linfield which would ultimately end his club career.

It was then he began his ‘RC1’ goalkeeping school for young people aged nine to 16, and he had been holding weekly training sessions at Omagh Youth Sport until the coronavirus brought a halt to the programme. It is hoped the training will resume in the near future.

“The coaching is going very well,” said Carroll. “It has given me a new lease of life. It has taken my mind off not playing. The kids are happy and learning.

“Some days I miss competitive football, especially when the weather is nice! I had been playing for 23 years and you do miss waking up on a Saturday morning and not preparing for a match. But my next ambition is to help a young goalkeeper play for Northern Ireland.

“I want to be the best goalkeeping coach, to give these kids the best start in their careers that they can get, because when I was growing up I never got any coaching in Northern Ireland.”

Despite playing in the English Second and Third Division with Wigan and Hull respectively, it wasn’t until he earned an unexpected move to Manchester United when he blossomed as a goalkeeper.

“I had ability, but I didn't have the technique. Technique didn't come until I moved to Manchester United when I was 23.

“When I was at Wigan, I only had a goalkeeping coach come in once every week, or once every two weeks. I just picked up things from different people, but it wasn't until I got to Manchester United when I really began to learn.

“I'm only teaching some of these kids once a week, so I've asked them to take home videos I have made and try to do little things themselves.”

As Carroll knows, ability alone doesn’t cut it and as a goalkeeper you need to be mentally strong to make a career out of the game.

“I want to prepare the kids for anything in life, even if it's outside of football.

“It's about being mentally tough, because life is tough. I have learnt that through football - I have been through bad times in my career. But I was mentally strong enough to get through it.”

Carroll admits fortune had a part to play in his move across the water to Hull.

“I had a bit of luck getting across the water when I was at Ballinamallard. You need luck, yes, but you also need ambition, and no one can push you except for yourself.

“When I spoke to my careers teacher in 1994, I told her I wanted to be a professional footballer. In those days, that was never heard of in Fermanagh. The saying was that scouts never came past Lisburn and I was lucky to be spotted by one of the strikers at Dundela who scored a hat-trick against me. We lost 5-1 but he came up to me after the game and asked would I like to have a trial at Hull City.

"It was because of my attitude in the game, I never gave up even when I had let five goals in."

It was Carroll’s confidence to command his area which helped propel him to the very top of the English game.

“I was very vocal even at the age of 16 at Ballinamallard. Young goalkeepers need to be, but you can’t coach that. They have to understand you must be vocal if you are to make it.

“As a keeper, you see the whole pitch in front of you so you have to understand the game.”

From Bangor to Lisburn, Fermanagh and Tyrone, Carroll spends his week with young goalkeepers across the country and he believes there is an abundance of talented young footballers here.

“They just need something to believe in. When I was growing up, I had Tommy Wright and Pat Jennings to look up to. Now we have Bailey Peacock-Farrell, who is from England, and I’m not being disrespectful, but these kids need someone to look up to - someone who makes them think: ‘If they can do it, I can do it’.

“In the next three or four years, I want to produce four or five goalkeepers who will go across the water.”

Young goalkeepers in this country could hardly have a better role model to look up to.

From Fivemiletown, to Ballinamallard, to Hull, to Wigan - and then Manchester United - it was quite the rise to fame for Carroll.

The move to United was as much a surprise to Carroll as it was to anyone else, though, he admits.

A deal with Leicester City had fallen through only days before Sir Alex made contact.

“Peter Taylor [then Leicester manager] called me to tell me he wanted an experienced goalkeeper as the club had just been promoted.

“I then got a call from my agent who said Sir Alex wanted to speak to me. To get the chance to go down and meet him was amazing. It was a bit of shock.

“All I ever dreamt about was becoming a professional footballer. I never thought I would end up playing for the best team in the world!”

The thought of meeting and training with the likes of David Beckham, Ryan Giggs, Paul Scholes and Roy Keane was nerve wracking admits Carroll, but he was quickly made to feel at home.

“I never slept thinking about what I was going to say to these lads the night before my first day of training. After half an hour though, I felt at ease. Everyone made me feel so welcome.

“I was nervous moving to Hull and Wigan, who paid a record-transfer fee for me, but United was something else.

“I worried about meeting these superstar players, but when I first walked in they made me feel so relaxed.”

Carroll made his debut in a 1-1 draw with Aston Villa. The following season, he played the last three games as United came from eight points behind Arsenal to secure the title.

“It was a dream come true to lift the cup. It was a real rush - everything went through my mind. I never thought I would be a Premier League medal winner. I’m very grateful for those memories.”

An FA Cup medal would follow with victory over Cardiff, as Carroll came off the bench to replace Tim Howard for the last 10 minutes.

“Sir Alex promised he would bring me on if we were winning 3-0 and he stuck to his word. That’s the type of character he was. I respect him a lot.

“It was some experience at United - and it made me the person I am today. Playing with the likes of Roy Keane, who is a winner, - everyone at United was just a winner. That's why I am a winner. If you ask anyone who played with me, they'll see why I have that winning mentality."

Carroll would leave the club to join West Ham before short spells with Rangers, Derby and  Odense BK. It was his time in Greece with OFI Crete and Olympiacos which Carroll remembers most fondly, though.

“I had down times at West Ham and had been drinking very heavily for three or four years. I had depression as I was injured. I wasn’t prepared for such an injury - and no one can prepare you until it happens. I was out for nearly a year. All that training and playing football every weekend was taken away from me.

“I still fight depression to this day. But I have been off the drink for over nine years. For sport players, it was difficult to talk about because you worried you may not get another club. I never came out with it until I moved to Greece.

“There were really lovely people in Crete where I played for six months. And then I moved to Athens with Olympiacos - I fell in love with the people there, too, and the fans. The president of the club really looked after me.”

Carroll moved back to England when Notts County made their move in 2014 and he was then selected for Michael O’Neill’s Euro 2016 squad.

Northern Ireland qualified for the Championships with a 3-1 victory over Greece and although he was Michael McGovern’s deputy, Carroll loved every moment of it.

“I was nearly in tears, thinking I would never have had the opportunity to play in a major tournament with my country.”

It wouldn’t have been possible without Michael O’Neill, says Carroll, a man who “deserves the key to Belfast city”.

Ian Baraclough has been appointed O'Neill's successor, and Carroll admits he would love to get involved in the backroom some day in the future.

“I would love to get an opportunity to become the goalkeeping coach,” he said.

“I know a lot of people in England who are working with their FA and I’ve been learning from them.

“But it’s not for me to say. That would be up to the IFA.

“Northern Ireland are my passion and of course I would love to be involved.”