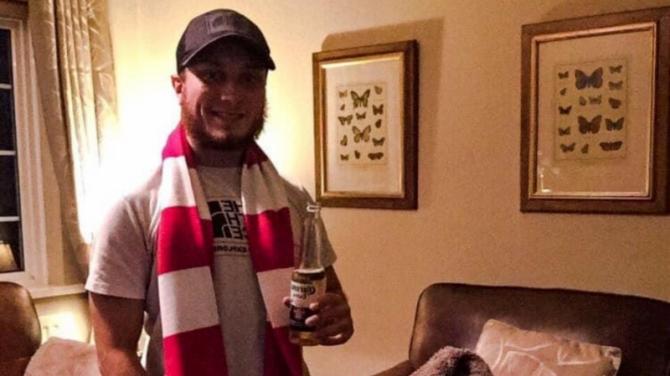 Aughnacloy man and lifelong Liverpool supporter, Ben Nelson, had been waiting for this moment all his life.

“As I write this, a day removed from Liverpool being crowned Champions of England, a title that has eluded our club for 30 years, I don’t think for most of us Liverpool fans it will have yet sunk in what Klopp and Co have achieved.

“I couldn’t possibly put into words what it means for every supporter far and wide, but I can give you some idea of what it means to me personally.

“Having sat this morning and watched some of the celebrations from the players and staff in the team hotel, to the fans outside Anfield and around the world I really can’t help but smile with pride.

“I’ve been a lifelong Liverpool fan. Born in the early 90s, I missed out on the glory days of the 70s and 80s when Liverpool were both dominant in England and in Europe.

“I’ve been on the receiving end of some serious banter. ‘Your birth has coincided with Liverpool being knocked off their perch’ and ‘ancient history’ were the two most notable jibes I’ve had thrown my way over the years.

“My dad took me along to my first ever game on a cold January in the year 2000. Liverpool v Middlesbrough at Anfield along with my uncle Harry and cousin Jonny.

“As an eight-year-old, the highlight of the game was waving the flag my dad had bought me outside the ground to ‘You’ll Never Walk Alone.

“My childhood hero Robbie Fowler didn’t play that day through injury, and a young Michael Owen pulled up early doors in a drab and dismal 0-0 draw.

“Liverpool would finish fourth that season, 24 points behind rivals Manchester United. Although it wasn’t the best of games, it was start of my love affair with the club, and my dad would take me over to Anfield right up until I was old enough to start going to the games with my mates.

“The following season did give fans something to shout about as the club picked up an iconic treble under then manager Gerard Houllier, which included the League Cup, FA Cup and UEFA Cup. And for me, my first taste of what it was like to see the Reds win some silverware.

“Rafa Benitez took over from Gerard Houllier in the summer of 2004. League form was up and down, and inconsistency in the league hampered Liverpool throughout the season.

“The club reached the League Cup final in Cardiff in 2005 which I attended with my dad. A day of disappointment would be in store: Chelsea beat Liverpool in extra-time after a Steven Gerrard own goal as Jose Mourinho would make the infamous “shuushhh” gesture as he walked up the touchline in front of us, which aided in stoking up an intense rivalry between the two clubs in the coming years.

“However, we would get our own back on the ‘Special One’ when the two clubs met in the semi-finals of the champions league.

“After a 0-0 draw at Stamford Bridge, the tie was was in the balance for the return at Anfield and it was time for Mr Mourinho and friends to meet the Kop.

“It was a tight affair in an electric atmosphere, with cult hero Luis Garcia’s ‘ghost goal being the difference and the mighty Reds back on the big stage in their first European Cup final in 20 years.

Silvio Berlusconi’s AC Milan awaited Liverpool in the final. A team awash with some of the finest players in world football and very few would give Liverpool any chance. We found ourselves 3-0 down at half time and second best in every department.

“I watched the game in my high school Aughnacloy College as they had put a big screen on for us, and at halftime was drowning my sorrows over a can of coke as I listened to the Liverpool fans belt out a rendition of You’ll Never Walk Alone in what felt almost like a call of prayer.

“I don’t feel I need to go into much detail on what happened next, as even your casual football fan knows all about the miracle of Istanbul and arguably the best champions league final there’s ever been.

“Five years later and under a different regime in American owners Tom Hicks and George Gillett who purchased the club in 2007, Rafa Benitez and Liverpool would part company, and in would come Roy Hodgson.

“Dark clouds were beginning to circulate around Anfield in a time me and my fellow Liverpool supporting mates refer to as the ‘dark days’.

“Hicks and Gillett would almost bury Liverpool with debts as talk of administration loomed.

“Roy Hodgson simply appeared out of his depth from the word go. Poor signings, poor performances and poor comments would both infuriate and worry supporters at the same time as the atmosphere became toxic.

‘Liverpool are not too big for a relegation battle’ and ‘A club like Liverpool should count themselves lucky to take a point against Man United’ are quotes that still make us all shiver.

“Fenway Sports Group would purchase the club from Hicks and Gillett in October and Hodgson would be gone within three months as club legend Kenny Dalglish came in to steady the ship and give fans a reason to smile with a League Cup win at Wembley in 2012 which I was lucky enough to attend.

“Seeing Steven Gerrard lift the club’s record eighth League Cup will always be a fond memory and my first trip to Wembley. Sitting beside the late Ronnie Cowan in the second row of the huge stadium is certainly one I won’t forget.

“FSG, another American group, seem to be working much better than their predecessors at the helm as the club is completely unrecognisable from where they were 13 years ago.

“FSG, although not perfect and still appear to be coming to grips with understanding and learning the cultures and traditions surrounding Liverpool Football Club, do appear to be willing to listen which can only be a good thing moving forward.

“The 2013/14 season is another I won’t forget in a hurry. Me and my mates in the Dungannon Liverpool Supporters Club chalked up quite a few games that season as we came so close to the title.

“We watched them obliterate teams in the first 20 minutes of games as the fans sang ‘poetry in motion’ in unison.

“We all had a feeling of hope that this could be the one as we welcomed team buses as things got to the business end of the season.

“Unfortunately, it wasn’t to be, defensive issues were never addressed and Gerrard’s infamous slip became the most notable moment in a season where costly errors would come back to bite us in what felt the cruellest conclusion to a title race.

“Step forward Mr Klopp. ‘The Normal One’ would join Liverpool in October 2015, taking over the reigns from Rodgers.

“With his heavy metal style of football on the pitch and his hugs off it, Kopites took to the big German from the off and it was a match made in heaven.

“In just over four years it’s safe to say that Jurgen has delivered. He has also given me personally some great memories as me and the lads travelled to Madrid to watch Jordan Henderson lift the club’s sixth European Cup.

“Although the four of us were ticketless, we made the most of our time in Spain and had a great day in the Spanish capital. ‘Allez allez allez’ seemed to ring out from all corners of the city as fans decked the town out in the famous red and white flags and banners.

“In the league Liverpool racked up a total of 97 points - and it still wasn’t enough as we were pipped by a point. An excellent Manchester City side would go on to lift the title. Although winning the Champions League did soften the blow, I’m sure I’m not the only one who began to question,would I ever see Liverpool be crowned champions of England?

“Certainly in my time following Liverpool we’ve had things to cheer about, things other clubs would bite your hand off for, we know that. But the longer the title remained from our grasp the more we craved it.

“ We’ve been nearly men on a few occasions, but we just didn’t have enough about us to get over the line. I’ve even questioned if there was some sort of curse that hung over Anfield. And that’s not even going into pandemics and the prospect of ‘null and void’

“But on Thursday night that curse was finally broken as Man City were beaten by Chelsea and Liverpool were finally crowned champions of England after 30 long years.

“This season for me was bit different. Different in the fact that I’ve previously seen very good Liverpool sides in seasons gone by and felt “hopeful” that they could be the set of players that take us to the title.

“This season it was something else, I didn’t have hope but pure belief. I think most Liverpool fans felt that way even if it wasn’t said out loud by the majority, probably due to the fact we hadn’t seen a league title in so long which made us a bit more coy with our words, almost as if we didn’t want to jinx anything.

“I sat in the away end at the King Power Stadium on Boxing Day and watched on as Liverpool totally demolished a good Leicester city side 4-0.

“I went that night expecting a tough game and a big test for Liverpool. They passed with flying colours and totally blew the Foxes away.

“As I walked back to the hotel from the ground, thoughts entered my head of this possibly being the best team I’ve seen, not only at Liverpool, but ever, filled with not a false hope as before but with real belief.

“And what a feeling it was to see it done and dusted on Thursday and to see what it meant to those associated closely with the club.

“To see Klopp and Henderson well up, to see what meant to a club legend in Kenny Dalglish. Emotions of sheer joy, happiness and relief.

“I feel like Liverpool are back now. Back on their old perch as the saying goes and the feel good factor is clear to see.

“That factor comes from the man who made it possible, Jurgen Klopp.

“His positive nature is infectious and the vibe he creates flows through the club from players to fans. It must be a great environment to work and ply your trade under someone of Klopp’s character.

“The team are playing some of the best football seen at Anfield for a long time.

“Jamie Webster’s ‘Boss Nights’ have added a lot in terms of fan culture and the innovative and catchy songs he composes and plays on his guitar are quickly latched onto by supporters and in turn become carried into the matchday.

“The team are winning, the fans are singing and the two go hand in hand.

“So it’s time now to celebrate this title, enjoy it and bask in the glory of it all. We’ve waited 30 years you know! Although we can’t have our moment, our day to pack out Anfield and watch the Premier League trophy held aloft by the lads or our open top bus parade which everyone deserves, those moments will keep, and will be all the sweeter when they are able to take place.