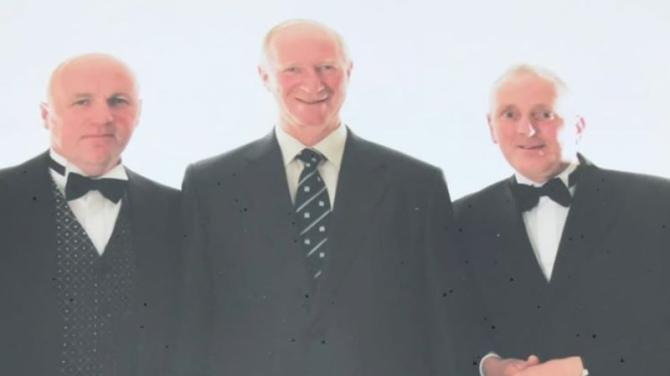 The passing of former Republic of Ireland manager Jack Charlton evoked sadness at Irvinestown Wanderers FC in particular this week.

The Fermanagh and Western club was proud to host Mr Charlton as their special guest on the night they celebrated their centenary in 2007 at Mahon’s Hotel, Irvinestown.

Paul Cassidy, the club’s secretary, said Mr Charlton was very much down to earth, despite all his achievements in world football.

“Big Jack ticked all the boxes to be our guest speaker,” said Paul.

“Obviously, he was a World Cup winner with England and a successful manager at the Republic of Ireland.

“We put in a few enquiries to check if he was available and thankfully he was.”

Charlton had a packed itinerary for the one-day trip, but because everyone wanted a photograph with him, and because he refused to turn anyone away, time went in very quickly!

“I picked him up at the airport on a Saturday morning,” said Paul. “He did a tour of the Bawnacre that afternoon, but he was stopped everywhere he went. He was a man very much in demand and everyone wanted their photograph taken with him. We were on a tight schedule and it was difficult to get through it!

“But he was very witty, down to earth. He just had time for everyone.”

Once Wanderers announced Charlton would be the guest speaker, the demand for tickets was high.

“Before his speech, he pulled out a couple of sheets of paper that were absolutely just hanging together. They were torn and ripped. I asked: ‘would you never get that re-typed?’ but he said: ‘No, they do will the best’. And everywhere he went, he used the same sheets.”

It was an unforgettable day for Irvinestown Wanderers and the fact Charlton travelled to Northern Ireland solely to celebrate the club’s milestone speaks volumes of the man.

“It was a very special night,” continued Paul.

“He signed a lot of shirts that were auctioned. There are some great memories of the evening - and it was a great way to mark the club’s 100th year.”