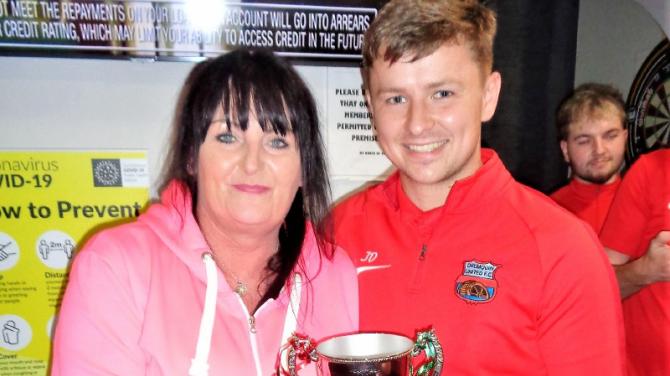 It was Fintona Swifts’ turn to host the third Killian and Maurice Memorial Cup at Ecclesville Park on Saturday and although finishing scoreless after 90 minutes it was an entertaining clash with Drumquin United.

It was Drumquin who eventually took the honours after an enthralling penalty shootout.

The match was attended by the McCloughan and Doherty families to celebrate the memories of two fine young men and friends, Killian Doherty and Maurice McCloughan who tragically lost their lives in December 2016.

In the first half Drumquin United were arguably the best team with Davis and McGlynn pulling the strings in midfield. Chances were at a premium with Brett Wallace unlucky in front of goal and player manager Jordan Dennison trying his luck from distance. Drumquin captain, Luke Reid who impressed Maurice’s father, Kevin McCloughan was a constant threat raiding down the wing but both defences were stoutly resolute to keep the score 0-0 at half time.

In the second half, Fintona Swifts presented a stiffer challenge and forced DUFC keeper, Adam Pollock, into a wonder save when a thunderbolt free kick by Fintona’s Luke Northern was acrobatically tipped over the bar at full stretch.

Soon after, Joshua Nethery had thought he had scored when he unleashed a spectacular curling effort only for Fintona’s Connor McCarney clawing it away to safety. McGlynn and Liggett both had efforts from long range for DUFC but neither side could break the deadlock.

With the final whistle blown, both teams prepared for the shootout. It eventually took 28 penalties to separate the two teams. U

Killian’s mother, Carmel thought it was a nerve wracking but enjoyable match and praised the defensive heroics of Darren Collins who helped ensure that United didn’t concede in a good spirited yet competitive encounter.

Adam Pollock Drumquin’s stopper was selected as the man of the match after his faultless performance between the sticks.

The DUFC committee congratulate the players and manager, Jordan Dennison on reclaiming the Memorial Cup. The match was a fitting tribute to the memory of Killian and Maurice. It was appropriate that the cup was presented to Carmel Doherty to keep it until it is contested again in 2021.

Drumquin United would like to thank Fintona Swifts and Kevin McCloughan for their customary fine hospitality and wish them very well for the season ahead.