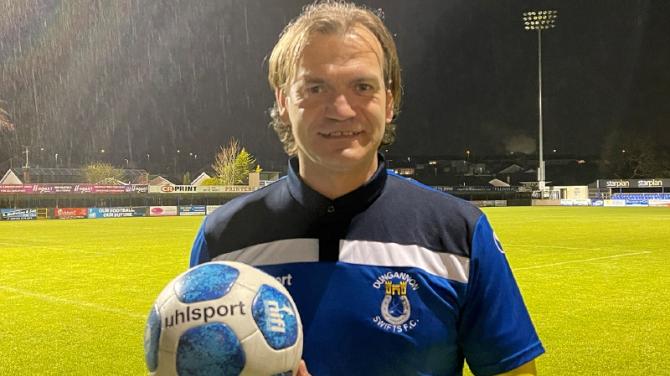 Carroll, who was capped 45 times by Northern Ireland, put pen to paper with Swifts on Friday.

The 43-year-old, who also played for Fivemiletown United and Ballinamallard United, arrives at at Stangmore Park at a crucial point in the season.

Swifts sit second bottom on eight points, but they now embark on hectic period in the league campaign, with games played every Tuesday and Saturday for the next six weeks at least.

The high experienced shot-stopper is relishing the return to Irish League football and has vowed to give everything he’s got to help Swifts increase their points tally and climb up the table.

He was due to start between the sticks for his new club last night (Tuesday) when they faced Ballymena United away.

"I’m coming back to play in the Irish League and no matter what team you sign for, it’s just great to get back out and play football," said the Fermanagh native.

"A real pull for me to Dungannon is that the club has two young keepers and I feel it would be good for me to come in and help them as much as I can.

"I know Connor (Byrne) very well as I’ve been working up at Dungannon Youth, in the NIFL Academy, with him. Hopefully I can help develop him and Sam (Johnston) for the future of the club."

Carroll, who also played for Linfield in the Danske Bank Premiership is best known for spells at Wigan Athletic (138 appearances) and Manchester United (46 appearances) which is where he won a Premier League and FA Cup in 2004.

He started his footballing career coming through the youth development system at Ballinamallard United.

Carroll also holds the unusual honour of having won a trophy in his only game as a manager when Barnet beat Stevanage 201 in the 2011 Herts Senior Cup final.

On the International front, Carroll has won 45 caps for Northern Ireland making his international debut against Thailand in 1997.

He was also part of the 2016 European Championship squad.

"My proudest footballing moment would be becoming a professional footballer as a 15 years-old," he continued.

"Not too many people come out of Fermanagh and become a professional footballer but I got the opportunity, I was in the right place at the right time.

"I’ve played in all the English leagues, Greece, Denmark, and I was up in Scotland as well.

"No matter what league you play in, you have to respect the league.

"When I first started, it was a tough league, the football was 100 miles an hour, strikers running on top of you all the time.

"I had to adapt and adapt very quickly as a goalkeeper. I had a few injuries at Linfield, the worst one being rupturing my ACL, but I feel great and I’m looking forward to a new challenge in the next few months."

Carroll was released by Linfield in May 2019 after he sustained a serious knee injury four months earlier.

He joined Mid Ulster junior club FC Mindwell in September last year, but COVID-19 has wiped out football below elite level and Carroll has also been unable to continue with his coaching school due to the coronavirus restrictions.

He was determined to get back playing football again – and that spelled good news for Dungannon Swifts!

"My coaching school has been closed down and there’s been no football at all for me to play or coach," he explained.

"I was watching football on TV the other day and I said to myself I want to get back playing again.

"I want to get out at the weekends and enjoy the games and that's what I want to do. I want to try and bring my knowledge to the young players at Dungannon.

"As a team I want to try get as many points on the board as possible, it’s not just down to me it’s a team performance.

"You have to go out and give everything you can for the team, and that’s what I’ll be trying to do with the rest of the squad, go out and try to get as many points as we can for the remainder of the season."

For Swifts boss Kris Lindsay, bringing Carroll to Stangmore Park on a short-term deal is a major coup.

"I’m delighted to get Roy in on a short term deal. Obviously he comes with mountains of experience and I know he’ll be very good in our dressing room," he said.

"We have a lot of young players, his experience will be invaluable for us and I’m thoroughly delighted to be able to get working with him."

It's been a busy few days for Lindsay.

Ahead of the January transfer window shutting, Strabane man, Rory Patterson, formerly of FC United of Manchester, Coleraine, Plymouth Argyle, Linfield, Derry City and Crusaders and Loughall's Nathaniel Ferris were among the new arrivals at the club while Omagh man, Kris Lowe, departed for Cliftonville.