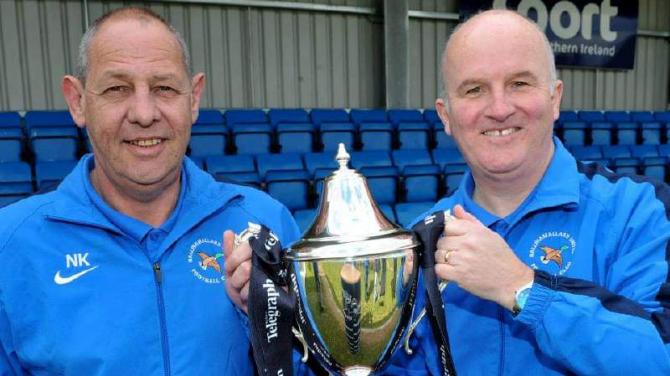 BALLINAMALLARD United, a small club from a rural village, captured the imagination of every football fan in Northern Ireland when they earned promotion to the top-flight back in 2012.

Whitey Anderson, as manager, was the mastermind behind the club’s rise to fame and the Tyrone Constitution reached out to him this week as the Omagh man reflected on a truly wonderful period in the club’s history.

“I moved house just before Christmas, so I have been looking through old newspaper clippings and photographs,” he said.

“Sometimes when you’re involved with something, you don’t really appreciate all you’ve been through.

“When I have the chance to reflect... there are some great memories. When I look back where we came from and where we got to ... it was very special.”

2012 is the year most fondly remembered by Mallards’ supporters, but the story really began some four years earlier, said Whitey.

“We entered the IFA Championship in 2008 following the restructure of the Irish League,” he said.

“We ended up having to groundshare at Armagh for 16 months which meant all our home games were played at Armagh.

“It was a very important period of time at our club, and I often sit back and wonder how we survived it to be honest. We paid Armagh a fee to use their facilities, our own bar and club was losing out, so it was a pivotal time in our history.

“I signed who I believe were three or four of the best local players at that time in Andy Crawford, James McKenna, Cathal Beacom and Conor McGuigan. I remember telling Andy that we were only going to groundshare at Armagh for three months. Well it turned out to be a lot longer than that! I got away with that one.”

Whitey told his players of his ambitious plans to get promoted within a five-year timeframe. But just four years later, Ballinamallard were winning at the likes of Windsor Park and Solitude as the Ferney Park boys made a blistering start to the Premiership after promotion from the Championship.

“I don’t really know if I believed in my heart of hearts if we would get promoted within the five years!,” laughed Whitey.

“But it was certainly an aspiration for the club to push for promotion.

“For the first three years in the Championship we finished in the top six. I remember speaking to a top-flight manager and he told me we were punching above our weight. He said that what we had achieved at that stage was quite incredible.

“That was a fairly astonishing statement, and it’s one that always stuck with me.”

It was 10 years ago on Sunday when Ballinamallard had one of their finest nights at Ferney Park, said Whitey.

“The floodlights had just been installed about four months earlier, and we played Lisburn Distillery in an Irish Cup replay,” he said.

“It was Glenn Ferguson’s last game in the Irish Cup and we beat them 4-2 after extra-time.

“That was a massive game. We lost 5-0 to Crusaders in the next round and Stuart Dallas was playing against us. We got a real lesson that day at home.

“I remember speaking to people after the Crusaders game about where the club wanted to go from here. I knew if we wanted to kick on and achieve promotion to the Premiership then we needed to get a few players in.

“I spoke to Gerry Cassidy from Enniskillen who does a lot of scouting across Ireland. He knew a lot of people in the Sligo area and we discussed certain areas of the pitch where we needed players. We got in Jay McCartney, Steve Feeney and Danny Keohane. Those three players in particular brought another level of professionalism. After all, they had been involved with clubs like Sligo Rovers.

“We already had a good group of local players that could do well and we were very professional in what we done. They were a very enthusiastic group of players. There was a great team bond, a great club spirit.

“Our first aim at the start of the season was just to be as professional as we could be as a semi-professional club and see where it took us.”

Whitey had also been serving the club as a member of the finance sub-committee at that time. But when promotion looked a real possibility in January, he approached the chairman Dessie Quinn and informed him he was stepping down from the role to concentrate solely on matters on the pitch.

“We got to March and we had six games to play that month,” recalled Whitey.

“We never discussed promotion openly within the changing room. We as staff had talked about it and plans were being put in place just in case we did get there.

“But certain things always stick in my head and I remember telling the players at the start of the month to just concentrate on one game at a time and see where it takes us.”

By the end of March, Ballinamallard had accumulated 16 points out of a possible 18 and had officially been promoted. A 3-2 victory over Bangor, coupled with the fact Newry City lost at Limavady, meant Whitey and his group of players had achieved what was unthinkable just a few years earlier.

“I remember asking why everyone was so quiet in the far side of the ground.,” said Whitey. “Little did we know that they knew exactly what was going on at Limavady. They were beating Newry at that stage, but I didn’t want to know anything. I just wanted to concentrate on what was going on in our game.

“The next thing, when the final whistle went, we heard a few cheers at the far side of the ground. The vice-chairman Peter Beckett came walking across and told me that Newry had lost and we had won the Championship.”

The title was wrapped up with four games remaining and Ballinamallard could finally start focusing on the following season in the big time.

“The whole question then was could the club get the facilities ready to compete in the Premiership? The club had to go and get the spectactor stand erected, and there was a lot of work done behind the scenes. It was a tight timeline, but so many people around the club and community pulled together and we were able to get things in place to get promoted.”

So, how did it feel to guide Ballinamallard to the promised land?

“It was quite incredible,” said Whitey. “You’re chatting about bringing Premiership football to Fermanagh for the first time in 125 years of the Irish League history.

“On a personal level, I was delighted to be the manager and I’m grateful. But there’s a lot of people at the club who put so much work into it over the years.”

Key to the club’s long-term success was the youth academy, which was redeveloped in 1996.

Whitey had been involved - along with John Quinn and many others - before he took over the senior team 10 years later.

There were quite a few players that had come through the youth system and played their part in achieving promotion.

“It meant a lot to me and everyone at the club,” said Whitey.

“I’ll be honest, when we were revamping the youth section there were people who thought we were mad. But the reality is is that it worked. It was hard work and we had very committed volunteers.”

If promotion was an achievement, finishing fifth in the top-flight the following season was something extraordinary.

“After the first round of games we were top of the table,” said Whitey.

“It was quite incredible.

“We finished fifth that season - the top team outside of Belfast - which meant that we qualified for the Setanta Cup the following season. We beat Linfield twice at Windsor Park, we also beat Cliftonville who went on to win the league that year.

“The team we had in the Championship and in the first season of the Premiership was a fantastic team. We had such a solid defence, we had exciting full-backs and wide players with pace and energy. Up front it was the same. We just had so much energy and belief.

“At the end of the day, the manager is only as good as his players. There was a great camaraderie within the team and you can’t coach that. We had such strong characters that came together to make it work.”

The budget was small, but the manager worked wonders in the market.

Key to the Mallards’ success in the Premiership was the acquisition of international goalkeeper Alvin Rouse, who would keep 17 clean-sheets that season.

Renowned goalscorer Ryan Campbell had also joined the ranks along with Liam Martin and Conor O’Grady.

“I wanted to give as many of the players who had got us promoted the opportunity to play in the Premiership,” explained Whitey.

“We didn’t want to go into the Premiership to be walked over. So we worked as hard as we could, but we enjoyed it. I told the players to finish as high up the table as we could - we didn’t set targets.

“It was wonderful to see the smiles on the faces of players and the fans. It created a lot of interest in the county and even down in Tyrone and Omagh.”

It was an incredible year for Whitey - his words - and not just from a footballing point-of-view; he was also blessed to attend the weddings of both his daughter Rachel and Richard in the summer of 2012.

Fond memories indeed. Now that he is back in Omagh after a period living in the USA, is there any temptation to get back into management?

“There are aspects of it I miss,” he admitted.

“I like the thought of helping other people, such as young coaches coming through, offering my advice.

“It’s amazing the wealth of knowledge you build up in the game that you could use to help other coaches, and that’s the kind of line I’d like to go down now.

“But as the man says, never say never,” he said.