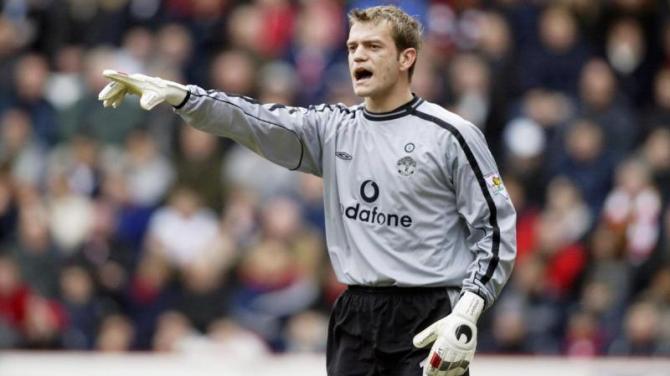 ROY CARROLL has just been asked a difficult question and it’s clear there’s no obvious answer. ‘What was your favourite game in a Manchester United shirt, Roy?”

The veteran goalkeeper, now playing for Dungannon Swifts, pauses for a moment to reflect. And the reason why there is no obvious answer is because the Fermanagh man has enjoyed so many great times with arguably the biggest club in England and the world.

After all, Carroll won the Premier League and FA Cup during his time at United, playing 72 times under the legendary Sir Alex Ferguson.

After carefully considering the question, Carroll points to his debut, which came against Aston Villa in the Premier League.

It was Sunday, August 26, 2001 at a sold out Villa Park. First-team goalkeeper Fabian Barthez had picked up an injury and Carroll was next in line to take the gloves for United.

After making the move from Wigan Athletic that summer, Carroll had a chance to prove his worth with the Premier League champions.

Unfortunately for Carroll, he was picking the ball out of his net after just four minutes - not that there was anything he could have done about Darius Vassell’s opener.

United’s defence looked vulnerable after Ferguson took the decision to sell Jaap Stam and it was a busy afternoon for the former Fivemiletown United and Ballinamallard United shot stopper.

At the opposite end, the legendary Peter Schmeichel was proving as unbeatable for Villa as he had done for United for all those years.

He saved from Ruud Van Nistelrooy at point-blank range, and the big Dane thought he had helped Villa earn all three points with a fantastic reaction save to deny Roy Keane.

But just as Ferguson’s teams had a knack for doing, United would grab a late equaliser when Alpay Ozalan steered Ryan Giggs’ corner delivery into his own net.

Carroll had performed well in a match that Villa created plenty of chances in, his standout moment saving a Juan Pablo Angel shot.

Reflecting on the day, Carroll’s fondest memory was sharing the pitch with Schmeichel, who had always been one of his idols.

“Playing for Manchester United was a big, big thrill,” Carroll told the Tyrone Constitution in an exclusive interview.

“When you’re playing against one of the legends of the club, Peter Schmeichel, that was an ever bigger reward for me.

“You would never forget playing your first game for Manchester United and the bonus was playing against Schmeichel. He won a lot of trophies at the club, and it was a real honour to play against one of the great goalkeepers.”

Carroll, who was just 23 at the time, had been given notice of Ferguson’s plans to play him the day before the game.

“I was absolutely buzzing,” he recalled.

“Yes I had butterflies, but that was normal. It was a big thing to play in the fourth or fifth game of the season, it was massive.

“I didn’t think I would make my debut for the club so quickly. But that’s what I always tell the goalkeepers that I coach: you must always be ready to play.

“I had prepared the right way and was ready for the game.

“I remember going one-nil down and thankfully we managed an equaliser.

“I got Schmeichel’s top at the end of the game, and I’ve still got it here in my house.

“Of course I was disappointed with the result, but playing against quality players like Schmeichel was special.”

Villa Park holds fond memories for Carroll, who produced a superb performance and kept a clean sheet as United emerged 1-0 winners over Arsenal in the FA Cup semi-final back in 2004.

Paul Scholes ended Arsenal's hopes of the treble, firing home from close range from Ryan Giggs’ cross after 31 minutes to set up a final against Milwall, which the Red Devils would go on to win at Wembley.

United had to absorb huge pressure in the second-half, with Edu and Patrick Vieira hitting the woodwork for Arsenal.

Carroll made excellent stops to repel the legendary Dennis Bergkamp and Kolo Toure.

“I kept the team in it at 0-0 and thankfully we went up the other end and scored the winning goal,” recalled Carroll, who is now a goalkeeping coach working locally.

“I remember making a save one-on-one to deny Bergkamp and making a reaction save after Arsenal hit the crossbar.”

Carroll enjoyed many great times at the club, but unfortunately his form dipped after the semi-final and he was not selected to play in the FA Cup final, although Ferguson did bring him on for the last 10 minutes as United comprehensively defeated Millwall 3-0.

“I had a really bad time after the semi-final, playing wise,” admitted Carroll.

“I made a few mistakes and my body language wasn’t good, so I knew I was going to get a tap on the shoulder from the boss some day.

“I had played a huge part in the semi-final, but there were three or four games between that and the final. I was still a young kid, and I have learnt from that experience. The game was over and I needed to focus on the next game, but I don’t think my focus was there. I took my eye off the ball and was probably thinking too much about the final. As a goalkeeper you need to think about each game individually and unfortunately I made silly little mistakes in games and cost us a few goals.

“So I didn’t disagree with Sir Alex because he was right, I wasn’t prepared for the final. I have nothing against it because Sir Alex played his strongest team and the team went out and won the cup that day.

“Tim Howard came in and played, but the boss stuck by his word, that he would put me on if we were winning by more than three goals. Not too many managers would do that, particularly in the FA Cup final.

“Sir Alex would always tell you the truth. It took a wee while to sink in, but you always get more respect if you tell the truth. I might have got angry, but that was better than saying nothing and just taking it on the chin.

“Of course I was disappointed, but I knew. That’s football and sometimes it’s not nice, but you have to get on with it. And I was ready in case something happened to Tim Howard.

“It’s a team game at the end of the day and even as a sub keeper, you play a little part in it.”

To lift the FA Cup was an absolute dream for Carroll, who spent his childhood on that traditional Saturday in May in front of the TV watching the build-up of the final for hours on end.

“I have always said, every kid wants to play in the FA Cup,” said Carroll.

“In the early nineties, we loved watching the FA Cup finals and after the game, everyone would then play their own version of the FA Cup in Tamlaght!,” he laughed.

The following year, Carroll was selected ahead of Howard as United faced Arsenal in the FA Cup final of 2005.

But it’s a day he would “rather forget” - in his own words - as despite keeping a clean sheet in normal time and extra-time, he ended up on the losing side as United lost on penalties.

Jens Lehmann made the crucial save from Scholes as the destination of the trophy was decided on penalties for the first time in its history.

United were left empty-handed after Wayne Rooney hit the post and Freddie Ljungberg deflected van Nistelrooy's header on to the bar.

In extra-time, a young Robin van Persie forced a fine diving save out of Carroll from a free-kick.

Unfortunately, the Fermanagh man could do nothing with Arsenal’s excellent set of penalties, with Patrick Viera scoring the decisive spot-kick.

Another moment that has come back to haunt him is the infamous ‘ghost goal’ against Tottenham at Old Trafford back in 2005.

Visiting midfielder Pedro Mendes launched a hopeful effort from the halfway line, and the high ball took Carroll unawares, causing him to fumble the shot. The ball crossed the line before Carroll scrambled back and clawed it away. Fortunately for him and United, the linesman didn’t award the goal and the game finished in a goalless draw.

“I still get a lot of stick, and people always bring up that moment against Spurs,” he said.