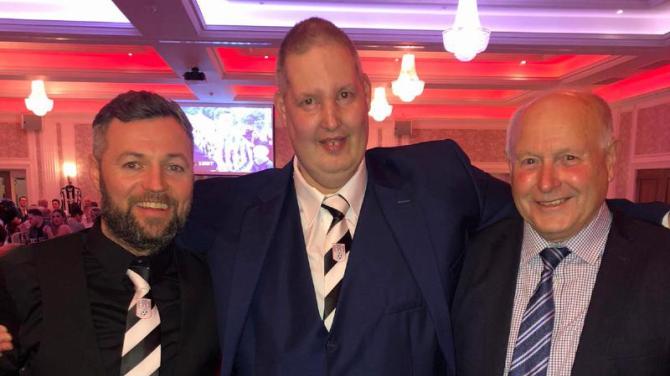 DERGVIEW boss Ivan Sproule has dedicated his side’s Irish Cup triumph to one of their most loyal of fans, Rodney Vaughan.

Rodney is fanatical about the Championship club and has sorely missed match day.

And although he was unable to be in attendance once more on Saturday, he was able to watch the drama unfold through a stream online and he was the happiest man in Castlederg when his beloved Dergview won the penalty shootout.

His brother-in-law and local councillor Derek Hussey said Saturday was a marvellous day for all supporters but none more so than Rodney.

“We were all truly disappointed knowing that we were not being able to get to Ferney Park in-person to support Ivan and our team but as soon as the online coverage was announced Rodney was on the phone to my wife Karen, former Dergview secretary, to get it sorted,” said Mr Hussey.

“Over the years, Rodney has become one of the most regular and familiar faces in our Dergview community and few will get past him without the question being asked 'have you got a pound on you?' as the Dergview Lotto envelope is produced.

“Whilst Rodney's contribution to the financial wellbeing of Dergview Football Club cannot be exaggerated, neither can his zeal of support 24/7 for all that the club do both on and off the pitch.

“This past year has been hard on all supporters but, given the big part that the club plays in his life, Rodney has found it particularly difficult, missing contact with the players, staff, fellow supporters and his loyal band of Lotto contributors.

“That said, there can hardly be a day that goes by when a phone conversation takes place with manager Ivan, chairman Roy, Kenny, Adrian and many others. There is no doubt that these contacts have helped ease the strain over these past trying months.”

The bonus came on Saturday at Rodney's home as he watched an exciting encounter unfold and Karen's commentary on Rodney sums it all up: “He was getting to the stage yesterday when the penalties were taking place that he kept saying 'me can't watch'.

“The noise in the house when the Derg won was unbelievable - you would have thought he had scored the goal himself."

“The magnificent gesture of dedicating Saturday's Cup win to Rodney is greatly appreciated not only by Rodney but by all the family,” continued Mr Hussey.

“Thank you Dergview and on to next Saturday.”