Canning chomping at the bit to get started at Dergview 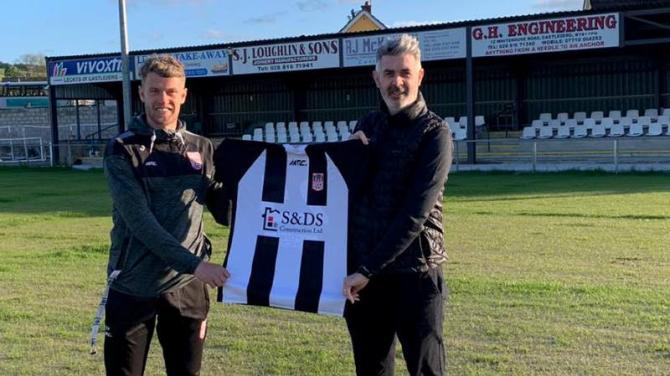 THE new manager of Dergview Football Club admits he cannot wait to get his teeth stuck into the role.

Tommy Canning has been announced as the successor to outgoing boss Ivan Sproule as he steps away from the Finn Harps u19 job to take the helm at the Championship club. He has appointed Gareth Porter as his assistant.

The hotseat at Dergview is familiar to Canning as he held the manager’s job for a short while back in 2013 and he admits he always had an ambition to return to Castlederg.

“It is an exciting time because it’s something I have been working towards,” said Canning.

“I have managed at Dergivew for a short period back in 2013. It’s always been about trying to return to senior football.

“When the opportunity came around, I was more than happy to take it.”

Asked what was most exciting about the job, Canning said: “I think sometimes people forget the level Dergview are playing at. It’s a good level, just one division below the Irish Premiership. That is what excites me.

“I’m looking forward to working with senior players that are at the club, some of them experienced and some of them young.

Sproule’s ambition was to make Dergview a consistent in the top-six, but at the moment Canning refuses to look any further than tying down key players within the current squad.

“I think in football anything is possible,” he said.

“There are so many variables that your best-laid plans can be destroyed very quickly or they can be accelerated very quickly; that’s the nature of the sport.

“It’s easy to say we’re aiming for a top-six finish, but there are eight or 10 clubs within the Championship that are aiming for the same, and there are three or four clubs aiming to win it.

“So my aim at this moment in time is to tie down the playing squad. I could say I’m aiming for a top-six finish, but then not get the squad I’m looking for and then all of a sudden you’re nowhere near the top six.

“So the priority is to get the playing squad and staff team in place, get a decent pre-season schedule and then we will reassess where we are ahead of the new season.

“But certainly Dergview should be challenging for the top-six. They’re more than capable of that as a football club, but again that’s all dependent on a whole lot of variables.”

Asked if he will be seeking to bring in new faces over the summer, Canning responded: “I think squads always need freshened up every year, although I don’t think this club needs a major overhaul.

“I think it needs a small number of new faces but again that’s dependent on everyone returning.

“There’s a good squad here, there’s quality in it. There’s great experience in the likes of Paul Wells, Graeme Crown, Blaine Burns, Sean McCarron. They’ve been around senior clubs and the Championship for a long time, so they know it inside out.

“There’s also a good blend of youth in Shea Devlin and Matty Kirk. So there’s a wee bit of everything here and there’s a few in training that joined for the cup run with Ivan that I’ll be hoping to keep. I want to keep 95 per cent of what is there and add a sprinkling of quality and youth and hunger.”

Canning paid tribute to the outgoing boss Sproule. The pair have been talking extensively to ensure a smooth period of transition.

“I’ve been talking to Ivan behind the scenes throughout his time at Dergview,” explained Canning.

“I’ve a long-time affiliation with the club stretching over a decade or more.

“I would have talked to all of the managers when I was away from the club and Ivan was no different. I tried to encourage players his way and I tried to help him with the identification of players.

“Since I’ve come in, Ivan has been very gracious. He reached out to me by phoning me, and that’s not all that common in a transition period between manager and the football club, and that says a lot about Ivan as a person.

“It also says a lot about how he feels about Dergview. He wants the club to do well and I will continue to speak to Ivan over the course of the season because he’s a valuable sounding board and has great knowledge of the game and the players that are here.

“I’ll use that relationship to further the whole club.”