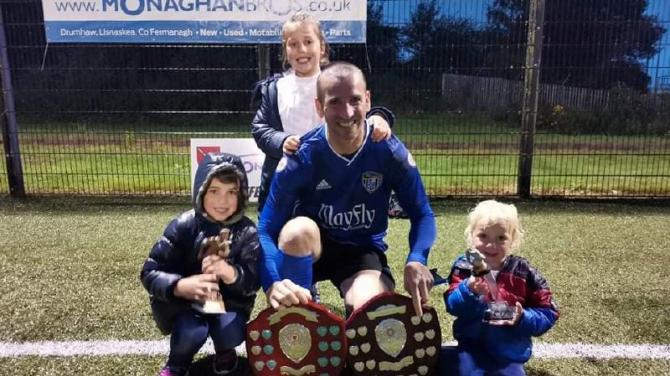 THE biggest talking point in the Fermanagh and Western League over the summer was the transfer of Ryan Campbell from Ballinamallard United to NFC Kesh - and now the question is: 'can the veteran fire them to an historic title?'.

The signing of ‘The Rocket’, as he is affectionately known, has made people sit up and take notice of Kesh and the 39-year-old’s blistering form in pre-season has only heightened expectations.

“He’s another piece of the jigsaw that we have been putting together over the last couple of years,” said manager Scott Robinson.

“We were talking to Ryan last summer and it was nearly done then. But Harry [McConkey] managed to persuade him to stay for another season.

“He’s a superb player and he can only bring the younger boys on. He’s lost nothing of his pace, that’s for sure, and I think he’s scored 12 goals in five games in pre-season.

“But if he doesn’t have the players behind him he’s not going to score goals so thankfully we have plenty of talent in the squad in the likes of Lee Walker and Nathan Cashel.

“I’m hoping we have a right squad now to really compete and give it a good go. Tummery and Enniskillen Town are the big clubs, but we’re not here to just make up the numbers.

“As long as we’re in with a chance with six games to go, that’s the most important thing. But we’ll just take it one game at a time.”

As Kesh have never won the Mercer Cup before, Robinson would love to make history with the club.

“You want to get silverware back to the club and I think we’re moving in the right direction.

“We’ve had a great pre-season and the players are in great shape. I can’t fault the commitment of anyone. They’ve shown a real desire to try to push the club on.

“A few signings have made a massive difference.”

As well as Campbell, Kesh have also signed centre-back Ryan McFarland from Mountjoy.

Former Ballinamallard United player Callum Frempong has come in to replace midfielder Corey Logan, who has moved to Castlefinn Celtic.

Sixteen-year-old Danny Wilson has also come in from the Ferney Park club who is said to be an immense talent.

Kesh open up their campaign on Saturday away to Enniskillen Athletic.

“We want to get off to a winning start, and we have a good, tight-knit squad who are all pushing for the same thing,” continued Robinson.