In-form Igiehon happy to net the winner for Dergview 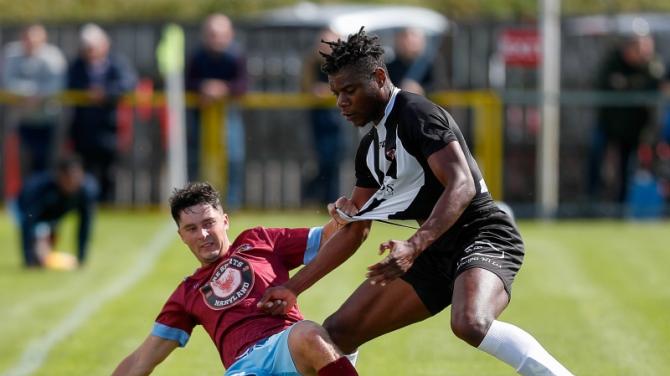 BENNY Igiehon scored his third goal of the season to help Dergview return to winning ways with victory over bottom of the table Dundela at Wilgar Park on Saturday.

Tommy Canning's men hadn't won since the opening day of the season but put that right against Colin Nixon's side who have only collected just one point from their five outings to date.

Matthew Kirk opened the scoring for Dergview with just over a quarter-of-an-hour on the clock but William Faulkner levelled for the Duns midway through the first half.

And that was how it stayed until the 74th minute when Igiehon popped up with what proved to be the winner.

Speaking to this newspaper, Igiehon said the points are more important to him than scoring.

“I’m more happy that we won and have the points on the board,” he said.

“It was nice to get the winner. It fell nicely for me and it felt good because it was a difficult game.

“It was so hot and I think I got cramp after about 60 minutes, but obviously you’re not going to tell anyone that because you want to keep playing!

“There was a water break and thankfully I was able to get a rub on my leg. In the last five minutes, I got kicked on that leg and even now I still feel it, even after an ice bath.”

“We didn’t feel great after the loss to Newry,” he continued.

“I felt like we could have done something in that game. When you’re at home, you feel more comfortable.

“So we worked really hard to get the win at Dundela. The centre-backs were good, we have some good young players in the team who did their jobs well.

“Dundela put us under a lot of pressure, it was a good game and I’m just happy to get the win because I think we deserved it.

“They didn’t have any real clear cut efforts and to be fair our goalkeeper was class as well because he made some nice saves from long-range efforts.

“It was a good challenge and we enjoyed it.”

Igiehon may already have three goals in just five league games but the Dergview forward believes he can still do better.

“There is always room for improvement and ways to get better. Life is all about self-development so you have to keep working hard and pushing on.”

Asked if he had a target number of goals this season, Igiehon said: “I’ll take each game as it comes.

“Each game has its own challenges. At the end of the day, football is about fun. The harder you work the more fun you have.

“So my main focus is to work hard for the team and to do my job right: press hard, win headers, and getting assists is as good as a goal.

The former Finn Harps and Sligo Rovers forward admits he has settled in quickly at Dergview’s.

“It’s all very good, the manager as well. Everyone is just working hard to meet the target.”