'IT'S STILL IN OUR HANDS' 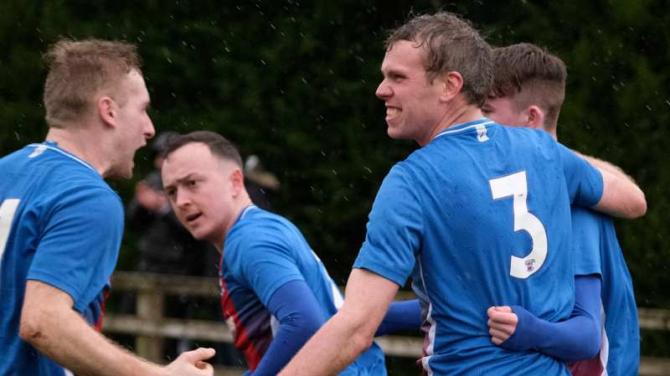 MOUNTJOY United missed the opportunity to seal their return to the top-flight of the Fermanagh and Western League on Saturday following a 4-1 defeat to Fintona Swifts.

Thankfully for David Rennie’s side, they have two more chances to earn the two points required to achieve promotion.

One win or two draws from their remaining fixtures - against leaders Derrychara United and Enniskillen Galaxy - will still be enough.

However, Rennie couldn’t hide his disappointment after watching Fintona net three times in the final 10 minutes despite Mountjoy looking good value for at least a draw.

The result was the best outcome for the neutral as it sets up an intriguing finale, with Fintona still battling Mountjoy for the second automatic promotion spot.

Already-promoted Derrychara lead the way with 36 points, two ahead of Mountjoy - ahead of their potentially title-deciding match. A date has yet to be confirmed for this mouth-watering contest.

Fintona Swifts remain third but are now on 32 points, four behind the league leaders and two behind Mountjoy having played a game more. Their final fixture is against - you guessed it - Derrychara, which they must win to have any chance of promotion.

But if they can replicate the impressive performance displayed against Mountjoy, anyone would fancy them for a top-two finish.

Substitute Matthew Mahon levelled things up with his first touch.

But Fintona saved the best for last, with McGlinn grabbing his second of the day and defender Sean McMenamin making it 3-1 with a powerful header.

McGlinn converted from the penalty spot to hand Fintona a flattering three-goal win.

Mountjoy manager Rennie conceded it was a disappointing result for his side.

However, he added: “Everything is still in our own hands.

“We play Enniskillen Galaxy away and Derrychara at home. If we win those two games, not only will we be promoted but we’ll also be champions.

“Everything is still to play for.

“There are no easy games and anyone can beat anyone on their day.

“You only have to look at Derrychara’s defeats - they lost to Fivemiletown, who are bottom at the moment.”

Saturday was far from ideal preparation for the run-in but Rennie insists his players are not feeling sorry for themselves.

“After we equalised, we had chances to go two, three or even four up ourselves. We were guilty of not taking them at a crucial time in the game. It would have left things a lot easier, but unfortunately that’s football.

“Both teams had chances.

“Things just didn’t go our way, but we’ll dust ourselves down. We realise there are only two games left and the reward is there for us.

“Anything can happen in football, and everything is at stake with just two games left.​​​​​​

“We have to stay positive because we’ve come so far, put in good performances and set our standards all season; we’re not going to let them dip now.”

Fintona Swifts boss Ryan Welsh hailed the result as an “important win” for his side.

It keeps alive their promotion challenge, although they have a lot to do - beat current leaders Derrychara and hope Mountjoy lose their remaining two games.

“It keeps us in the chase, although it’s probably just out of our reach,” said Welsh.

“We need to keep winning, but we’re pushing them all the way and unfortunately it’s out of our hands.

If promotion fails to happen this season, Welsh is confident his side can form another strong promotion bid next term.

“We’re heading in the right direction and very happy with how things have gone. We’re playing a good standard of football and now we just need to take the next step.”

Meanwhile, in Division One, Omagh Hospitals boosted their chances of survival with a 2-0 win over Irvinestown Wanderers.

The result means the Hossies are now four points clear of Enniskillen Athletic, who are second from bottom.

Kian Murphy opened the scoring in the second half with a header that Wanderers’ goalkeeper Jerome Carleton could do little about.

Conor O’Donnell’s defence-splitting pass sent Ronan O’Neill through and he duly converted to put the game beyond Irvinestown.