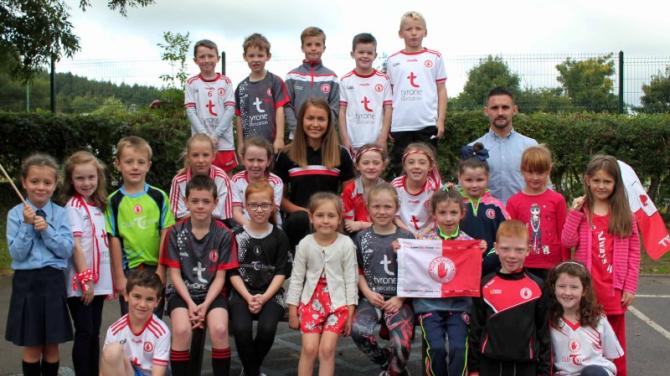 THE Tyrone ladies have their sights set on an All-Ireland title as they prepare to take on Meath in Sunday’s Intermediate Football Championship final at Croke Park. They return to GAA headquarters to atone for the disappointment of last season, when they lost out to Tipperary in the decider.

A second successive appearance in the All-Ireland final is the culmination of a season of dedication, hard work and skilful expression of the finer arts of the game.

They have come through some tough games, particularly the semi-final clash with Sligo, when they had to display grit and character to carve out a win. That experience will stand them in good stead as they reach out for the big prize this weekend.

Much will depend on the performances of Gemma Begley, Neamh Woods, Maria Canavan, Niamh O’Neill, Chloe McCaffrey and others in Tyrone’s date with destiny.

Grainne Rafferty has painful memories of last year’s final, despite scoring a goal in the clash with Tipperary.

“I scored the goal in last year’s final, yes, it was something very special. You don’t think it at the time but when you look back it was brilliant,” she said.

“That said, we came up the road with nothing, that feeling hurt and I suppose you could say it made us all the more determined. We are determined to get the result on Sunday, we are taking it all in our stride this year, there’s no point in getting caught up in the hype surrounding the final, I think that with the men in the final there’s still plenty of a buzz around but as players you have to focus on Meath and that’s what we have been doing, that focus has been there all year.”

And defender Christiane Hunter is confident that the Tyrone challenge will be strong enough to atone for last year’s disappointment.

“We have a very strong squad, a lot of exciting young players coming in and things are buzzing, we have unfinished business from last year, the hurt was palpable after the loss, it was a terrible feeling,” she said. “Our performances have been good this year, we had a real tough outing in the quarter and semi-finals but were good enough to get over the line, we have developed well as a team and maybe we are even stronger than last year.”

Meanwhile manager Gerry Moane said there’s a determination within the squad that they will be celebrating on Sunday evening.

“You could say we have unfinished business,” he said. “We enjoyed the build up to last year’s final but came away with nothing, we stood in the middle of the pitch at the end and took it all in, that’s a feeling none of us want again. Croke Park with over forty thousand people is still a lonely place, it tears you apart. We are returning to Croke Park for the outcome not the occasion, We made no secret that we wanted to be back here.”

Moane feels the experience of last year’s decider will stand to his players.

“We have some very experienced players and the players who were involved last year as youngsters have matured now too, we have the perfect mix, they have been working towards this since November last year. It’s a long road back but we have made it. It will take those big players and all of them used on Sunday not just the starting team to get us over the line.”

Tyrone go into the decider with a fully fit squad, and no injuries to hamper their push for glory.

“Our build-up this year to the final has been good, we had club semi-finals to contend with, thankfully bar a couple of knocks and bumps we have nothing serious.

“We played an in house game last week and some of the players admitted it was the toughest game they ever played in. There’s some competition for places, we have thirty five available players and two girls though our development squad, they all featured and some question why you need a big squad.”

He added: “In the semi-final I felt we made life tough for ourselves, we have massive firepower but we missed goal chances, that allowed Sligo back but we showed great character to come back and score 1-1 in two minutes to win it. Missed chances cost us last year in the final, we could have been 1-7 up in the opening 10 minutes, we weren’t and that gave Tipperary the chance to get at us, We feel we left it behind us . We will have learnt from that.

“We have great respect for Meath, we knew after watching them in the league final that they would be in the championship shake up, they just missed out on the final last year and they have a couple of very good players, we will be in a battle but this is their first final in over 20 years, a whole new experience and like us nothing really prepares you for a final at Croke Park.”

Midfielder Neamh Woods expects a really tough encounter against a talented Meath side. “This is another massive game for us, we face a good Meath team,” she said.

“But I feel we are as strong if not stronger than last year and the hurt of losing that final was raw, maybe it still is, it has been mentioned yes but it has not been the main driver of this season.

“We felt maybe we left something behind us in Croke Park last year and we made a decision that we wanted to be back, we have done that but now we have to complete the job, that has been our focus from the start of the year.”