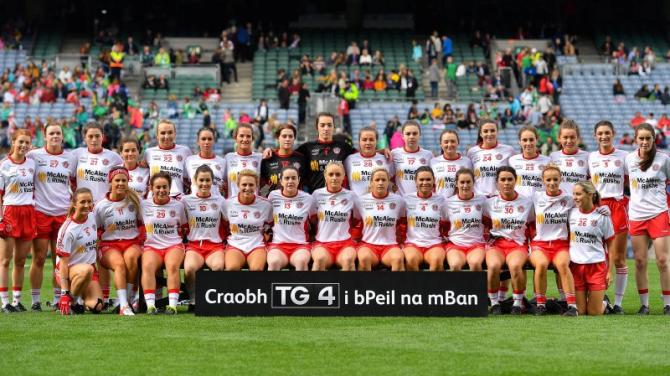 TYRONE produced a breathtaking Croke Park performance to win the All-Ireland Ladies Intermediate Championship title with a runaway win by 6-8 to 1-14 over Meath in the decider. The Red Hand girls fired in six goals on their way to a memorable triumph – just reward for all the hard work and preparation they have invested over the past year.

The disappointment of losing last year’s final was well and truly wiped away, as they celebrated with friends, family and supporters at GAA Headquarters. Four first half goals paved the way for a day of joy and a comprehensive victory over a Meath side that never gave up and fought to the finish.

And Tyrone grabbed two more majors after the break to confirm their supremacy and lay their claim on the Mary Quinn Cup.

“It was great to come to Croke Park and perform on the day,” said manager Gerry Moane. “The performance was always coming, but it was great to be able to deliver it on the day.”

And with Neamh Woods settling the team with an early goal, the players never looked back. “It was the perfect start,” Moane added. And he was delighted to see his team bounce back after losing last year’s final.

“Everybody was talking about the difference between last year and this year, but it was always about getting the start. We were clinical when we needed to be clinical and when the opportunities presented themselves we were able to take them

“We knew that Meath had good forwards, so we knew we had to take care of them, but we have always been creating scoring opportunities and we did that again today. We should have had more, but it’s all about getting a victory in an All-Ireland final and we did that today.

“The occasion played a massive part last year, and we knew this year it wasn’t going to be about an occasion, it was about a match, we weren’t going to leave anything behind us, it was all about getting back to Croke Park and getting the performance.”

Both sides shot early wides as they struggled to overcome big match nerves, but it was Meath who got the first score through Niamh O’Sullivan.

The Red Hands struck the first of four first half goals in the sixth minute, the product of a flowing build-up, with Grainne Rafferty providing the final pass for Neamh Woods to palm to the net. They added an eye-catching point through Chloe McCaffrey, and in the 19th minute struck for a second goal, a brilliant individual effort from Niamh Hughes.

Tyrone lost Aine Canavan to injury after 12 minutes, but Niamh O’Neill proved to be an able replacement, slotting in seamlessly to a well drilled offensive system. And they were solid at the back as well, with Emma Brennan and Emma Mulgrew getting in telling challenges, and Woods also dropping back to good effect.

Tyrone got in for goal number three on 14 minutes, a dropping delivery from Gemma Begley fetched by Grainne Rafferty, who finished to the net from close range.

As the Royals pressed higher up the field, they clawed their way back with points from O’Sullivan, but Gemma Begley responded with a converted free. Back came the Leinster champions again, with Stacy Grimes  landing a couple of fine scores to narrow the gap to four.

Tyrone steadied the ship, and finished the half strongly with a fine McCaffrey score, and a superb goal from Niamh O’Neill, who applied a classy finish from Emma Jane Gervin’s pass, after the strong running of Niamh Hughes had created the opening.

Tyrone led by 4-3 to 0-7 at the interval, and struck for yet another goal two minutes into the second half, Niamh Hughes making the run to create the opening for Woods to apply a cool finish for her second.

Another wonderful score from Niamh O’Neill had the Red Hands 12 clear, but Meath refused to give up, and pulled back a handful scores. Grimes, Vikki Wall and Orlagh Lally kept Meath’s challenge going, but when Maria Canavan held the ball up before releasing at the perfect moment, Gemma Begley slotted home goal number six for Tyrone.

Grimes netted a late penalty, but there was going to be no stopping the joyous celebrations that would greet the final whistle.