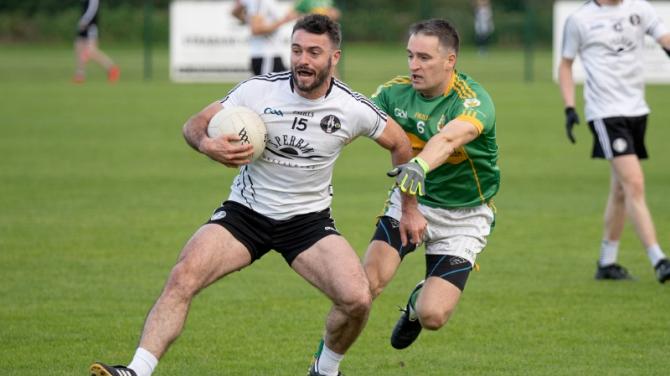 COUNTY champions Omagh survived a major scare when they were taken to extra-time by newly promoted Aghyaran in a gripping but somewhat cautious LCC Tyrone SFC first round tie at Strabane.

A shock was a very real prospect as the St Davog’s held on to a slender lead in the latter stages of normal time, but the St Enda’s grabbed an equaliser, and Damien McGuigan’s extra-time goal shattered the dream of the north Tyrone men.

Ronan McHugh grabbed an early goal and Aghyaran used that score as cushion as they protected the lead with a cautious approach, starving their opponents of possession.

But Omagh were determined not to allow their grip on the O’Neill Cup to loosen, and they dug deep to claw their way back, without ever getting to the levels of which they are capable.

It took some time for Omagh to settle against an Aghyaran team that battled for every ball, and it wasn’t until the sixth minute that Ronan O’Neill slotted over the game’s opening point.

But two minutes later they were stunned by an Aghyaran goal. Ronan McHugh’s 20 metre free failed to gain the required trajectory, and was deflected into his own net by Hugh Gallagher.

It was a frustrating time for Tyrone attacker O’Neill, until he steered a brilliant free kick between the posts from wide on the left in the tenth minute.

Eoin Byrne, Bernard Moss and Owen Devine stood firm at the back as the St Enda’s attacked, and at the beginning of the second quarter, the men from Healy Park went level when Cormac O’Neill provided the assist for Jason McAnulla’s well taken point.

Late in the half the St Enda’s began to get some joy as they pushed up on Benny Gallen’s kick-outs. Dean O’Neill landed the lead point, and O’Neill collected Conan Grugan’s quickly taken free to slot over another.

And when Conor Meyler cut the ball back for wing back Ryan McBride to split the posts in style, they led by double scores, 0-6 to a goal.

After a sterile and scoreless opening eight minutes in the second-half, Ronan McNamee won the free that McHugh stroked between the posts, and Tyrone full back McNamee followed up with a long range score from play to bring the sides level.

When in possession, Aghyaran side did push up in numbers, with defenders Eoin Byrne and Cahir Moss adding support to the offensive effort, and they were rewarded when flamboyant goalkeeper Benny Gallen also ventured forward, getting so far advanced that he won the 20 metre free that McHugh converted to give his side the lead at the end of the third quarter.