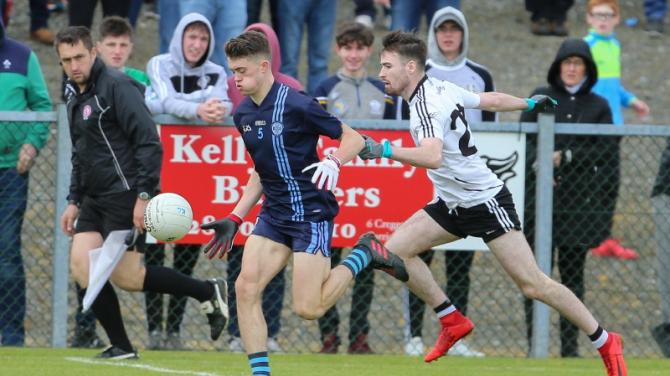 KILLYCLOGHER ended Omagh’s reign as Tyrone county champions with a six points win in their LCC quarter-final at Loughmacrory.

The Murnaghan brothers were at the heart of this well deserved victory. Eighteen-year-old Matthew turned in a man of the match display at wing back and picked off four classy points from play, while older sibling Luke came off the bench to grab the only goal of the game in the second half.

Now the St Mary’s press on with a semi-final clash with Ardboe at Carrickmore this Sunday, and what a game that promises to be.

They led by just two points after playing with wind advantage in the first half, but stamped their authority on the contest after the break.

“We knew that we were in a tricky enough position at half-time, but we’re a strong running team, and we knew that we had the quality against the breeze to drive it on,” said Killyclogher manager Dominic Corrigan.

“That was our best second half of the year, and we needed it, because Omagh were great champions, they weren’t going to hand over the trophy, we had to go and take it off them, and that’s what we did in the second half.”

After failing to get past the first hurdle as reigning champions last year, the St Mary’s were determined to make their mark in this year’s championship.

“We were disappointed last year that we were beaten by a good Pomeroy side.

“We’re in the last four now, and we just want to get to a championship final at this stage.

“We have the quality, and if we keep improving, and keep focusing on ourselves, then we’ll be happy enough.”

Having played without their county men, Tiernan McCann, Conall McCann and Mark Bradley for much of the season, they have been able to re-integrate their returning stars into the side, and they’re making the required impact.

“It takes time for the county men to get back into the groove, but our three county men are three outstanding club leaders, on and off the pitch.

“They set the tone, the rest follow, and it gives the thing a great lift.

“I was particularly pleased with our young players, as well as our seasoned players – Luke Murnaghan coming off the bench, his brother Mattie was outstanding, man of the match by a distance.

“It’s great to see the youth and the experience gelling, and if we keep going like this, then we’re going to be in with a chance of making another county final.”

And Killyclogher’s strength in depth is another asset which will once again come into play against Ardboe next weekend.

“There’s a great bench there at the minute, and that’s what we knew going into the game, that our bench was strong, and if needed they would do the business. They were needed, they did the business, and we’re delighted to be in the last four.”

With the wind in their backs, Killyclogher pushed forward in the opening stages, and picked off some terrific scores from distance, through Matthew Murnaghan, Tiernan McCann, Mark Bradley, Nathan Donnelly and Simon O’Neill, from a free.

Omagh were forced onto the back foot, and didn’t get their opening score until the 15th minute when Conor Meyler slotted over a point.

They missed a couple of scoreable frees, and after Bradley had nailed a 45 metre free, the St Enda’s enjoyed a spell of pressure late in the half.

Thomas Clarke came off the bench and scored two points straight away, and Ronan O’Neill was on target from a free.

Killyclogher, who lost midfielder Niall McFadden to a black card, led by 0-6 to 0-4 at the break, but had to withstand a strong Omagh rally in the third quarter.

Ronan O’Neill fired over a couple of scores to bring the St Enda’s level, and the Tyrone star gave them the lead for the first time in the 36th minute.

But the McCann brothers were always willing to run hard at the Omagh defence, and Conall’s 45 metre free had the sides level again.

Omagh suffered a blow when Meyler was sent off on a second booking, following an incident in which he suffered a serious wrist injury, and the defending champions sorely missed his dash and drive.

Five minutes later came the goal that decided the game, and it involved three substitutes. PT Cunningham and Tiernan Cox combined in the build-up, and from the latter’s cross, Luke Murnghan palmed the ball to the net past Niall McGinn.

Killyclogher never looked back, and while Omagh pulled back scores through Jason McAnulla and Justin McMahon, they finished it off in style with three points from the outstanding Matthew Murnaghan.