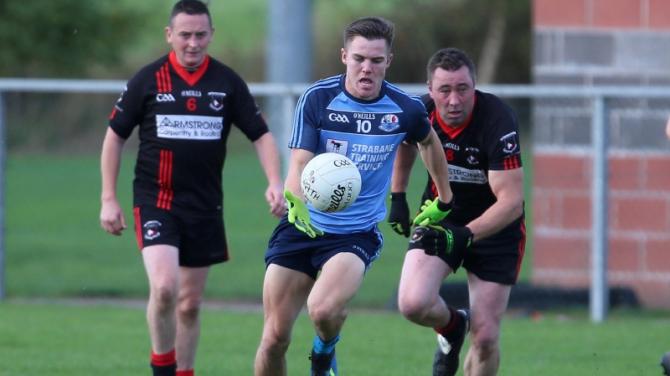 Sunday’s LCC Intermediate Football Championship final is perfectly poised to produce a cracker of a contest between two clubs from contrasting backgrounds.

Augher, with their proud history at senior level, take on an emerging Tattyreagh side that continues to enthral with its remarkable story. This time last year the Tatts were competing in the Junior Championship final, and now they stand just 60 minutes from the truly unbelievable prospect of promotion to senior football.

But their attempt to pen the perfect ending to what has been a fairytale story faces its stiffest test to date, as they face a talented and driven St Macartan’s side.

Both teams have astute managers whose tactical approach has enabled them to get the best out of groups of players who have shown hunger and desire throughout the campaign.

Eamonn Kavanagh has watched his Augher side mature through each round with some high-scoring performances, while Stephen McHugh has instilled a steely belief in his players, which has seen them produce heroic comebacks on their way to this weekend’s decider.

Tattyreagh got their challenge going with a first round win over Urney, shading a tight contest by 1-10 to 1-8 at Strabane, before staging a rousing comeback to stun Dungannon with a 3-11 to 1-14 victory at Carrickmore. And they came from behind once again to get the better of a fancied Gortin side with a 0-11 to 1-7 semi-final success at Carrickmore.

The Harkin brothers, Johnny and Collie, have been the driving force at midfield, while James Darcy’s finishing is a major asset for the St Patrick’s. And with Eoghain Murray, Damian Mullan and Feargal Armstrong performing resolutely at the back, they will be difficult to break down.

Augher launched their campaign with a comfortable 3-10 to 0-8 win over Loughmacrory at Galbally, but had to dig deep to get the better of Owen Roes by 0-15 to 2-7 at Pomeroy in the quarter-final.

And in the semi-final at Dungannon, they caught fire in the second half to score a 3-15 to 2-8 success over Stewartstown, with Darragh Kavanagh stealing the show with a spectacular 2-9 contribution.

Along with Martin McElhatton and Raymond McElroy, he will be an offensive threat this weekend, while Aidan McElroy’s midfield performance will be important for the St Macartan’s, who will also need  solid defensive showings from Finbar McQuaid, Paul Treanor and Jody Kelly.

Tattyreagh manager Stephen McHugh says his players, and the community, are living the dream.

“For a team that was in Division Three last year to come right up here, to get to the final of the Intermediate Championship, three finals in a row, for a small club, is absolutely fantastic,” he said.

“It’s what dreams are made of. We have a big battle ahead with Augher, but this is great credit to a wee small club with 125 families or so. To be able to build a team and take that team up to get a chance to go to Division One is absolutely phenomenal. The spirit of the whole club is great, they’re amazing people and it’s a fantastic achievement for them.”

McHugh is preparing for a huge task in trying to get the better of a seasoned Augher side at Healy Park, and he feels his players are ready for it.

“They’re a good side, but we’re going to do our homework. At the end of the day, we have to go out and play who’s in front of us, they’re a good side and we’ll do what we can. This is once in a lifetime opportunity, and I hope they take it, because they fully deserve it.”

His team has produced many heroic performances, but none more so than the comeback win over Gortin in the last round.

“It was totally immense, the character the commitment, the passion, and more than anything, the patience they showed. What a result.

“And what they did was, they showed character. The leaders of the team, Collie Harkin, Eoghain Murray, Johnny Harkin, James Darcy, Brendan Armstrong, Kevin Gallagher, boys that know how to settle it down and take the right option.”

Meanwhile, Augher manager Eamonn Kavanagh knows that if his players perform to their potential, they should be celebrating come Sunday evening.

“We know it’s going to be a massive challenge, but all you can do is hope you’ll go out and play the way you can play on any given day,” he said.

“Augher have been in senior football before, but I don’t think they have ever won an Intermediate Championship.”

And if ace finisher Darragh Kavanagh is on song, then the St Macartan’s will be hard to beat.

“Darragh is a great footballer, he has two good feet, and that’s what football is all about, getting it to the right men and taking your chances.”

The performances of midfield powerhouse Aidan McElroy have been key to getting Augher to the final, but manager Kavanagh sees teamwork as the key.

“Aidan is a fabulous footballer, but they’re a very honest bunch of lads, and no one player makes a team, every one of them did their job.”

The loss of full forward Aidan Cassidy through injury, however, is a bog blow, and his experience will be badly missed.

Kavanagh accepts that any game in this grade is unpredictable and can go any way.

“It’s a funny league, Division Two, in that any team could beat any team on any give day. You could be pushing for winning a league this, year, and next year you could be fighting relegation.”

The Augher boss was heartened by the second half display in the semi-final against Stewartstown, when they drove for home with a classy attacking display.

“I suppose it’s about applying yourself the right way. Even though we scored nine times in the first half, they had only scored five, but two of them were goals and the game was level. We felt in our legs and with the composure that we had, that we could kick on in the second half, and that’s what we did. The game can change on small margins, and another goal could have made it a tight game. Fortunately we got the goal.”