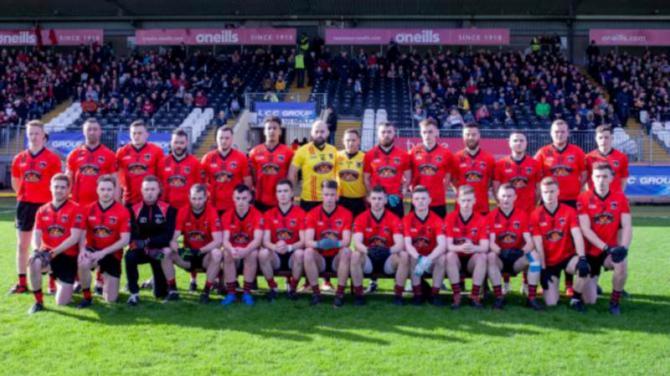 TATTYREAGH’S season of magical adventure just goes on and on.

Hot on the heels of a first ever Tyrone Intermediate Championship triumph, they have taken the provincial scene by storm.

A stylish victory over Armagh champions St Peter’s saw them set up a semi-final clash with St Enda’s of Antrim, and for their talented and driven players, the sky’s the limit.

Just a point separated the sides at the end of this Athletic Grounds clash, but the Red Hand champions were comfortable winners, with their opponents scoring a consolation goal from a stoppage time penalty.

The Tatts themselves struck for goals at crucial stages. After James Darcy had helped them settle with an early strike, they hit the net again just before the break, Jarleth McDonagh’s strike giving them a five points cushion as they prepared to play into a strong wind in the second half.

And when Gareth Mimnagh punched home a third ten minutes from the end, they were able to push for home with confidence and conviction.

McHugh heaped praise on his players and on their dedication to what has been a memorable season.

“This is a classic team, they’re just a lovely bunch of lads, they do everything right, they listen to you, socially they behave themselves, they’re dedicated to the game.

“They could have gone and celebrated for two weeks after winning the Intermediate title, but they didn’t. they hung it up after a couple of days and said, right, let’s get focused on Ulster.

“Last year, we threw Ulster away. It was a big occasion for them that day in Celtic Park, their first time in Ulster. The occasion got to them, and the changing room was horrible.

“It was a learning curve for these lads, and they have come out with a wee bit more composure, they know how to play the game, and they delivered.

“I genuinely couldn’t tell what more this team can achieve. This is bonus territory for them. They’re playing against the cream of intermediate teams in Ulster, they have played an Armagh team who had a lot of quality footballers, and we played them well and we beat them well.

“Take that penalty away from it, we won that game comfortably, and that to me shows the level that this team is at.”

He added: “Some of our choices at the very end were poor, a couple of snapshots and a couple of loose ones, but overall I would be 80 per cent satisfied with the performance of the team.”

McHugh was angered by some refereeing decisions which went against his side in the tense closing stages.

“There was some very dubious refereeing. That’s tough on lads whenever they’re doing their best, and the referee doing that.

“They were in the game the whole time, and it’s a kick of a ball. Whenever decisions like that there go against you, you get very frustrated and very annoyed and angry.”

Tattyreagh made the perfect start to the game. After Jarleth McDonagh had slotted over the opening point, they cut through the opposition defence to strike for a goal, brilliantly finished by James Darcy.

Collie Harkin and Peadar Mullan combined to send Joe Cartin in for a point, and they led by five.

Niall McConville opened the Armagh champions’ account, and they almost had a goal when Sam Marshall and Ruairi McDonald linked to release Ferghal Moore, but his shot was cleared off the line by Dan McGloin, who had come into the game after just two minutes to replace the injured Declan Gallagher.

But St Peter’s did nail a goal in the 13th minute, when Shea Geraghty provided the assist for Moore to finish to the net from close range.

Goalkeeper Ryan Pritchard was one of many heroes on the night, pulling off a fine save from Moore, and the Tatts countered again for Johnny Harkin to hot the target, with McConville responding in kind at the other end.

Gareth Mimnagh added a neat score, but again the Armagh men responded, McConville converting a free to leave just a point between the sides.

Johnny Harkin capped a strong run with a fine point, and Kevin Gallagher was also on target as the St Patrick’s went two ahead, and Eoghan Murray pressed from the back to set up a point for Darcy.

In the 30th minute, Collie Harkin sent McDonagh in for their second goal, a low finish past Darren Kelly, and they took a 2-8 to 1-6 advantage into the interval.

Early in the second half, Pritchard pulled off another excellent save, and as the Orchard men piled on the pressure, they close the gap with three points on the trot.

Kevin Gallagher and Brendan Armstrong helped out in defence, with Murray and Cartin also defending defiantly, and Tattyreagh

countered for Darcy to score from a free

And in the 51st minute, a third goal settled the issue. Kevin Gallagher provided the perfect pass for Cartin who crossed for Gareth Mimnagh to punch to the net.