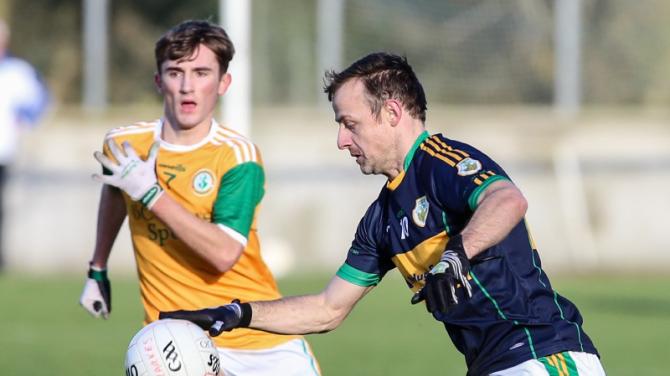 AGHYARAN dropped out of Division One after losing their promotion-relegation play-off replay to Dungannon in an extra-time thriller at Killyclogher.

It was a bitterly disappointing end to a difficult season as the St Davog’s finished on the wrong side of a tight score-line.

The absence of ace attacker Ronan McHugh was a huge blow for the north Tyrone team, and with other players picking up injuries during an absorbing sudden death contest, their resources were stretched to the limit.

They’ll play their football in the Intermediate grade in 2019, while Dungannon step up to Division One for the first time in three years.

Ronan McNamee rifled in a shot which was brilliantly saved by Martin, before Paddy McNulty latched on to the rebound to send the ball over the bar.

Tyrone star McNamee was a driving force at midfield, and his side went further ahead with a McNulty free, but the Clarkes produced a strong response, hitting three points on the spin to go in front.

Naoise Martin brought them level, and in the 22nd minute, a superb long range point from midfielder Mattie Walsh gave Dungannon the lead for the first time.

In the final ten minutes of the half, the St Davog’s stepped up the intensity, and Malachy Martin and Ciaran McGlinchey were involved in the move that saw McNamee curl over a point, and moments later, he thumped over a brilliant long range effort to push his side back in front.

The north Tyrone men finished the half strongly with scores from Sean Byrne (free) and goalkeeper Benny Gallen, who steered over a brilliant long range free from near the sideline.

Aghyaran went in with a 0-7 to 0-4 lead at the interval, and stretched the advantage through Malachy Martin, but lost two key defenders. Cahir Moss had gone off just before the break on a black card, and full back Beranard Moss picked up an injury early in the second half and had to go off.

Conor McKee converted a free to close the gap, but goalkeeper Gallen scored a 20 metre free at the other end.

The game took a crucial twist midway through the half when Dungannon grabbed a goal, Patrick Molloy getting in behind his man to collect a Dalaigh Jones pass and smash his shot past Gallen.

Kiefer Morgan came off the bench to make an immediate impact with two brilliant scores as Dungannon went back in front, and late in the game, Paddy McNulty brought Aghyaran level, before McKee converted a 40 metre free.

McNamee was sent clear on goal by McNulty but sent his shot just wide at the far post, and when another goal chance fell to the same player, his effort just cleared the crossbar, and the sides were level for the sixth time.

Another Dungannon sub, Patrick Quinn,  hit the target on 65 minutes, but in the tenth minute of stoppage time, Owen Devine pushed forward to win the free that McNulty converted to tie it up a 1-9 to 0-12.

In the first period of extra-time, Dungannon pushed in front with two McKee frees and a Quinn point, with McNulty and Gallen both on target from frees at the other end.

Halfway through it was the Clarkes who led by 1-12 to 0-14, and they extended their lead with points from McKee and Quinn.

Gallen responded with a free, but that was cancelled out by Padraig McNulty, and the Clarkes held out for a narrow win and promotion.

“I thought Aghyaran were phenomenally organised, very dogged, showed great heart and tenacity, and simply didn’t give up at any stage.

“Other teams, given the injuries that they suffered, would have fallen away, but Aghyaran were magnificent.”

Rafferty was delighted with the efforts of his own players as they claimed a place in Division One football for 2019.

“They all left it on the field, none of them held back. Padraig (McNulty), for a man that’s had a wedding on Friday, and due to start his honeymoon now on Tuesday, he put in a heck of a shift,” said Rafferty.

“Dalaigh (Jones) has the heart of a lion, but I’m just delighted for them all, and hopefully it will lay them a platform to play better football and enjoy it at the higher standard.”

Rafferty was pleased with the manner in which his players prepared for a winner-takes-all tie, given that several of them attended McNulty’s wedding celebrations on Friday.

“I think it’s a testament to their behaviour, how they finished the game off. They’re a relatively mature group that would have been at the wedding, and you have to trust them. To be fair, they delivered it in spades.”

Now the Clarkes boss is looking forward to mixing it with the county’s top teams in Division One in 2019.

“This year’s Tyrone Senior Football Championship was magnificent, so we’re looking forward to be part of that.

“You have to be optimistic about it, it’s going to be a phenomenal stretch in terms of the standard. We hope that we will mature even more.

“But if you don’t step up, you’re not really challenging yourself, and that’s where we aspire to be, and being competitive in Division One is the next stage in our evolution.

“You can’t take these things for granted, this will be the second time in ten years we’re there. We have worked hard to get there and I hope that will stand to us.

“But we’re really looking forward to it, there’ll be a lot of local derby games, and I think it’s healthy for our part of the world, and it’s certainly stimulating for us.”

Rafferty is confident that Dungannon have the quality and resources to make an impact at the higher grade next season.

“We have a fair bit of youth coming through, and when you have players of the calibre of Patrick Quinn and Kiefer Morgan to come off the bench, you can see them getting better, and the quality of the squad was impressive this year.”