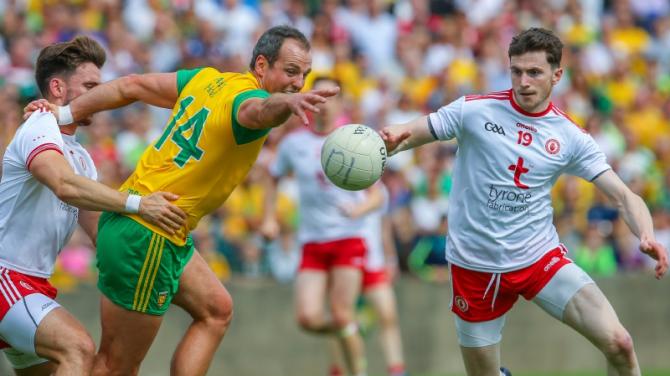 TRILLICK’S Rory Brennan is ready to pick up where he left off at the end of last season as one of Tyrone’s key defensive lynchpins.

Following a frustrating start to the year, when he struggled to get over niggling injuries, Brennan blossomed in the latter stages as the Red Hands made their way through the Super 8s and into the latter stages of the All-Ireland series.

And his form was so impressive that he claimed a starting place for the All-Ireland final against Dublin.

“For myself, last year got off to a slow start, with a few injuries, and I really only found form coming into the latter stages of the Super 8s, and was lucky enough to get a jersey on All-Ireland final day.

“I’ll be looking to push on this year and try to make more frequent appearances in the starting fifteen.

“With that momentum towards the end of last season, it’s just nice to get back out onto the training field now and push on and build on that.”

He is eager to make another big push for the All-Ireland and hoping that Tyrone can find ways to close the gap on a dominant Dublin side which won a fourth successive All-Ireland title last September.

“That’s what it’s all about. They have set the bar and they’ve set the standard for everyone else, and it’s up to ourselves to go out and work on things that we need to improve on.

“At the start, in the McKenna Cup, we want to hit the ground running, because that’s the best way to build momentum.

“Mickey (Harte) always says that, that the McKenna Cup has a big place in the hearts of Tyrone. We had a good run there for a few years, but we fell short in the final last year to Donegal, and it’s something we always look to go into with all guns blazing.”

Tyrone will take a competitive approach to the McKenna Cup in another pre-season that will see them win back the trophy that they relinquished to Donegal earlier this year, having claimed it in the previous six seasons.

“You can’t rest on your merits. Just because we got there last year doesn’t mean we’ll do it automatically again the following year.

“We’ll have to dig deep and work harder, work on those aspects of the game that maybe we fell short on, and lift the bar.

“We have new faces coming into the scene now, it will keep boys on their toes, and nobody will be comfortable in their position, because everybody is striving for places and there’s plenty of competition.”

Some new talent has been drafted into the squad by manager Mickey Harte, as well as a few familiar faces returning to the set-up, including Omagh’s Conan Grugan.

Kyle Coney also returns, as well as Darren McCurry, who opted out following the conclusion of last season’s National Football League and missed the run to the All-Ireland final.

“Everybody knows the quality that the three lads have, and the experience they have had. They have taken a step back for a while, but they’re coming back now with something that they have added to their game, and they will be looking to push on and make their mark,” said Brennan.

“The Tyrone Championship is the most competitive in Ulster, and it shows in the quality of players that are coming through the trials, that are putting their hand up throughout the season and staking a claim for a position in this Tyrone team.”

Meanwhile, manager Harte has expressed concerns over the new rules that will be trialled in the pre-season competitions, including the Dr McKenna Cup.

He warned that administering the rules will present serious challenges for the referees.

“I have grave reservations about them. I have been speaking to some referees who referee at a high level as well, and they are very concerned about them,” said Harte.

“And I think if you begin to anticipate some of the things they have to think about… you’re talking about somebody who has been fouled, you hand’s up for five seconds for that, you’re counting hand-passes at the same time, you’re counting the steps the players are taking.

“You’d need a computer in your head to go and count all these things that need to be counted, and I’m just not sure that we need all that workload on our already overworked referees.”

Harte is hoping that after the pre-season experiment, a number of the experimental playing rules will be dropped.

“So let them be trialled in the pre-season competitions. I think that should be enough to take a reflective view on that, and say, is any or none of these to be of value to us right now.

“I really don’t think they’re necessary, and I think there’s too many of them.”

He added: “What I think would be more not right is if they were to be played in the National League, and then removed for the championship.

“So all your preparation for the National League is of really no value come the championship, because you have got to switch into a whole new mode again.

“And maybe some of the strategies you were using because of these other rules do not apply now to the championship. I don’t think that’s sensible.

“So I think, yes, play them in the pre-season competition, have a good hard look at them and see what has been of value and what hasn’t, and leave it down for a while.”

Harte’s players have not yet had a chance to road-test the new rules. In recent weeks trials have been held at Garvaghey, but with new players coming in, many of whom may not make his squad, he felt it appropriate to assess talent under the existing regulations.

“We haven’t, because I didn’t really want to play them in the trials, because I didn’t think that would be fair to our players, to ask them to trial to see are they ready to be part of a county squad, and then introduce these confusing rules.

“So we didn’t play them under that, wo we haven’t actually played any game under them.”

Harte suggested that much of the debate over the current state of the game emanates from sound-bites.

“I think there’s a bit of hysteria out there in certain quarters about this game of ours, not a lot of quarters, but the quarters that they are in, they come very loud, as they do about most things, and they would be sound-bite stuff more than really thoughtful thinking about the game at all.

“It’s a pity that that’s the case, that certain interpreters, or call them what you will, are rabbiting on about things so it almost becomes a truth.

“I don’t think it’s the truth at all. If you speak about something continuously in a certain way, people almost come to accept this must be right.

“But I think we need to be more discerning than that, and we need to step out that sound-bite philosophy that we get from a lot of people who consider them authorities on how our game is played, and take a step back and just look at the good that’s in our game.