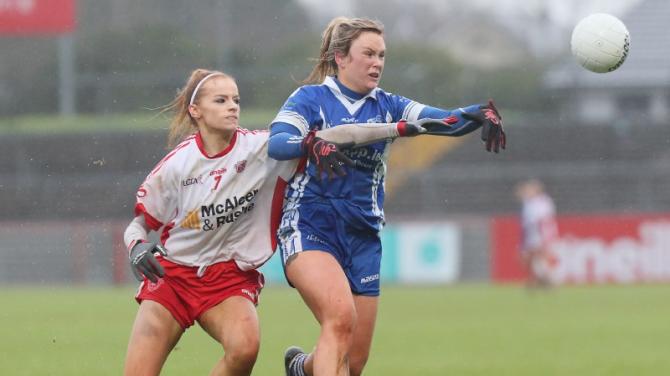 The Tyrone ladies produced a quality performance to get the better of Laois by 2-11 to 0-9 and extend their unbeaten run in Division Two of the National Football League.

An eight points success at Healy Park sees them sit in second place in the league table, as they followed up an opening day draw with Cavan. Despite difficult weather and underfoot conditions, the Red Hand girls combined solid defending with incisive attacking play and clinical finishing.

They played some terrific football against a Laois side that competed strongly throughout, but ultimately fell to a comprehensive eight points defeat.

Both Tyrone goals came in the first half – from Niamh O’Neill and Caitlin Kelly – and laid a solid foundation for a successful afternoon for the reigning All-Ireland IFC champions.

Manager Gerry Moane blended experience with emerging talent, introducing a handful of new players to his side, and handing debuts then for Eimear Currie and Mairead Mullan, while Aine Canavan also returned to competitive action following her ankle break in last year’s All-Ireland final at Croke Park.

Following a draw with Cavan in their opening tie, the Red Hands stepped up the level of performance, and on this occasion were more clinical in front of the posts.

“Look it was never going to be pretty there today, the conditions got worse as the game went on but it was the same for both teams,” said manager Moane. “We played well and controlled the game for long periods, a good win for us. We built on last week, the forwards were more effective today, we tweaked things and it worked, Niamh O’ Neill did well for her goal, a real acute angle and Caitlin Kelly’s finish was excellent.

“It was a workmanlike performance, we were very happy with the defence overall too.  Laois had opened brightly, but they just met a brick wall of quality defenders. The performance was pleasing as we have a week off now.”

Moane was delighted be able to restore some key players to his team following absences through injury.

“Yes we welcomed back Aine Canavan after her lay-off, Slaine Mc Carroll also returned after injury and we have a couple of players still out. It’s up to them themselves to force their way back in, if we continue playing well that becomes harder and that’s a good thing. We also gave a couple of new girls a run today, they dropped in well “

Goalkeeper Shannon Lynch made two excellent saves and defenders Christiane Hunter and Caoileann Conway also made important interventions at times when the Leinster side was threatening.

Tyrone opened the scoring through a well taken Emma Jane Gervin point, which was cancelled out by Emma Lawlor. Erone Fitzpatrick  added a second point for the visitors 10 minutes in,  with goal chances falling to Moore and Laura Nerney also in a good spell for Laois.

Maria Canavan fired over an excellent score following good work from Emma Smyth, and in the 16th minute, O’Neill found the net. A delightful chipped pass from skipper Neamh Woods opened up the defence, and O’Neill was quickly in to slide the ball home from a tight angle.

Tyrone were dominant in the second quarter, with Canavan adding a couple of points, and O’Neill and Niamh Hughes were also on target. Fitzpatrick and Nerney replied for Laois, but once again the Tyrone defence were hard to break down, with Slaine Mc Carroll and Emma Brennan in excellent form.

And they attacked with intent once again for Caitlin Kelly to rifle hime a goal, helping her side to a 2-6 to 0-5 interval lead.

Tyrone built on the advantage as soon as the game restarted, with Aoibhinn McHugh and Canavan both on target. As Laois rallied, Shannon Lynch again denied Nerney from close range but they could only muster occasional white flags, Lawlor with two frees, Laura Nerney and substitute Grainne Moran their scorers in a brief revival.

And Tyrone finished strongly, with Gervin, Canavan and Grainne Rafferty all adding points, as they strode to a confident success.