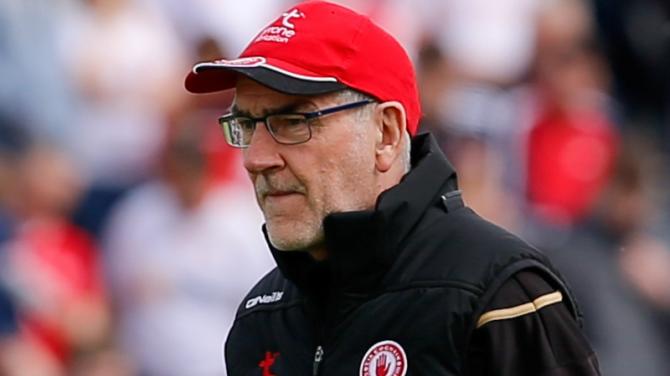 TYRONE manager Mickey Harte is confident his players can pick up the pieces, re-group and blossom in the All-Ireland Qualifiers, after their Ulster Football Championship dream was shattered by Donegal.

The reigning provincial champions eased to a 1-16 to 0-15 semi-final win at Kingspan Breffni Park to set up a meeting with Cavan in the decider, and the Red Hands are left to chart a precarious course down the scenic route.

But they have been here many times before, notably last season, when they lost their Ulster SFC opener to Monaghan, but bounced back to go all the way to the All-Ireland final.

“At least we have this second chance, and I suppose historically we have made a decent hand of availing of that opportunity,” said manager Mickey Harte.

“But again, it’s all to do with the luck of the draw, who you get in the first round or the first Qualifier that we play, and do we get a chance to build a bit of momentum again before you meet serious, serious opponents.

“So that’s all in the lap of the gods now. we don’t believe we’re a bad team just because we lost a game today, because we had a very good finish to the League, we were in the All-Ireland final last year, and one defeat in the Ulster Championship shouldn’t take away from all that.”

Harte is confident that his players can show vast improvement, and that they failed to do themselves justice in Cavan town.

“It’s just a bad day today, we didn’t perform as well as I believe we can, and obviously there’s always two reasons for that – perhaps we didn’t play as well as we can, but obviously the opposition have a lot to do with that as well.”

Harte took a number of positives from the game, not least the fact that his team was still pressing for a result in the closing stages.

“That’s probably the pleasing for us, that we didn’t throw in the towel, and we did fight on. Donegal were playing a lot of the game on their terms, and we had to work very hard to try and break that down and try and get some kind of control of our own on the game, and I think we did that at certain times.

“We still picked off a number of scores there that didn’t let them rest on their laurels, they had to fight to the end as well.”

Harte also reflected on significant setbacks, including the early goal, and the loss of Peter Harte to a black card as early as the tenth minute.

“We intended to perform much better than we did. At least get a better outcome than we got. I suppose there were a few key incidents in the first half that changed the script of the game; one of them being the sending off of Petey Harte for this magnificent black card which, for me, didn't fit any of the criteria necessary for a black card.

“I always thought it was a deliberate pull down, a trip by hand or foot or obstruction of a player after the ball is played. To me, it was a mis-timed tackle and it had a crucial impact on the outcome of the game.

“The early goal for Donegal, those two things together it left us in a very bad place pretty early in the game.”

Tyrone trailed by seven points at the break, and had a mountain to climb on what had been a difficult afternoon right from the first throw-in.

“That was a pity too because there was a stage we could have made it a one or two point game when we missed a few chances and they came back and kicked a few on.

“We kicked a few goal chances, a couple of them good saves by all means, but if we had have went in with a goal of our own it would have took the sting out of the one we conceded and made it a fight to the end.

“As it was, I suppose we were always chasing the game. Seven points against any team is a hard one to claw back and whenever a team get ahead, especially one like Donegal who know how to organise themselves and hold onto a lead.”

“To an extent, yeah. Maybe it is quite ineffective if you are not putting it in. Maybe that was part of the reason it was ineffective.

“The game was always going to be different, you weren't going to get playing the way you could, you had to be patient and work it around. Getting the optimum time to put it in is not always easy and I suppose Donegal being ready for that made it more difficult.”

Harte said he did not see the incident involving Tiarnan McCann which led to allegations of gouging.

“I wasn't looking through the lens of a TV, as you might well imagine. I was standing on the sideline as I always do. If something happens a distance away from me, I cannot see every detail that goes on.

“You obviously had a better view of that than I have, because I know nothing about it.”

Now the Red Hands must plot a course through the Qualifiers back to the business end of the Championship, as they did last year, when they lost their Ulster Championship first round game, before re-grouping to go all the way to the All-Ireland final.

“There’s not much choice. It’s good that the Qualifiers exist, that’s for sure, because if they didn’t, we’d be out of the Championship altogether now,” said the manager.

Meanwhile, Donegal manager Declan Bonner reflected on a solid evening’s work from his side, and now prepares to meet Cavan in the decider.

“Well, any day you beat Tyrone in the Championship is a good day. Both teams went at it, the healthiest of rivals. I thought overall that we deserved to win the match but there is no silverware handed out there today,” he said.

“We have 15 days to get ready for the Ulster final and that is our next task.”

Bonner was pleased with the manner in which his players embraced the challenge right from the first throw-in, putting the Red Hands under immediate pressure.

“We are playing this kind of football. The lads worked really, really hard. And again it is not just about the fifteen that started, there is real strength in depth there at the minute and 28 lads fighting for jerseys going into the Ulster final. We have to get ready, get back down to business.”

Jamie Brennan’s early goal gave his side the perfect start, and shone a light on the Bundoran lad as one of the finest emerging stars in the country.

“I thought in the first half we played really, really well. In the second half we were a bit sloppy at times but overall, it was a pleasing performance.

“Tyrone last year, they came from the back door to the All-Ireland final and they are one of the top teams in the country.”

Shaun Patton’s first half saves from Brian Kennedy and Colm Cavanagh were other important contributions to what was a convincing success over fierce local rivals.

“He is very, very good. Not just his saving, but his kick-outs and his restarts were really good,” said Bonner.

And the manner in which his defence pressed at every opportunity was another element in a total team display.

“It's the way the game has gone. Any of the top teams, that's the way they try to play football. I don't know what it was like for the neutral watching on but from the sideline it looked to be a high-tempo game. A lot of quality at times.”