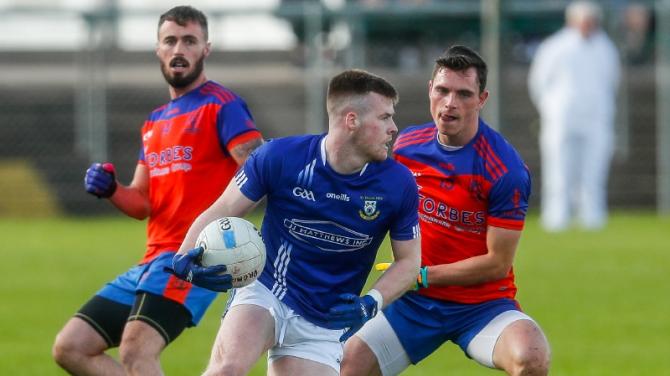 A TYPICALLY tense Tyrone Senior Championship tie went right to the wire at Plunkett Park, and it was Dromore who edged this preliminary round encounter by two points to set up a clash with defending champions Dungannon.

The sides were level going into the last couple of minutes, but the St Dympna’s found a way to kill the game off with two late scores.

They have little time to reflect or rest, for they’re straight back into Championship action this weekend in their bid to dethrone the O’Neill Cup holders.

Dromore manager Colm McCullagh was relieved to have got through an intense tie with a couple of points to spare.

“It was a typical Tyrone Championship match, it’s going to go to the wire every game.

“We saw it all last year, and it’s going to be more of the same again this year,” he said.

“Between the top twelve teams, on any given day, there’s very little in it.

“Dungannon proved that point last year, when they came out of the smoke and won a Championship.”

McCullagh was pleased with the manner in which his players stood up and delivered in the closing stages, when the game was very much in the balance.

“We had Colm O’Neill, a half back, going up the field and kicking two points, so that’s a positive for us.”

And Dromore dealt admirably with a challenging spell that saw them down to 14 men due to a black card flashed at Emmet McNabb.

“We have been practicing going down to 14 men, so we were prepared for it, and it’s on days like today that you have to bring that practice into play.”

Now it’s the county champions in the next round next Monday evening, and what a battle that promises to be.

“That’s next on the list for us, we have a tougher battle with the county champions coming.

“There’s no bigger challenge than facing the county champions, they’ll want to retain their title, so it’s a daunting prospect for us.

“But we’re glad to be able to face that challenge. Dungannon are a very good side, a brilliant side, and they proved that last year.

“No better team than Dungannon, they had to go to extra-time more times last year and found a way. It’s going to be a massive battle for us.

“We have eight days to regroup and get the bodies ready.

“Having that game under our belts will help, and the more Championship games these boys get the better.

“It’s a new team for Dromore really, a lot of personnel changes over this last five, six years, so the more Championship experience the better.”

Dromore almost made a major breakthrough in the opening seconds as Niall Sludden darted through the middle to fire in a shot which zipped just wide of the post, and Andrew McGrath also had a chance in those early stages, but saw his effort come back off an upright.

They took the lead in the third minute when Ronan McNabb slotted over a point, but the Rossas had the gusting wind in their backs, and began to press towards the town end.

Aodhan O’Donnell and Peter Teague both stepped in with effective defensive interventions, but the lough shore men finally got off the mark in the 12th minute when Oran Mulgrew provided the assist for CJ McGourty’s opening point.

Both goalkeepers were getting their short kick-outs away successfully, and building from deep, an outlet which provided former Antrim star McvGourty the opportunity to slot over his second.

But the sides were level at the first water break after Tiarnan Sludden won the free that Emmet McNabb converted.

Dromore looked the more potent sice going forward, and when McGrath and Colm O’Neill combined, Ryan McCusker arrived with a late run to get his shot away, but Ronan Cassidy responded with a fine save, deflecting the ball around a post.

Tiarnan Sludden shot his side back in front, but a fine score from Oran Mulgrew, off brother David’s assist, had the sides level again.

There was nothing in it, but as the rain and wind intensified, Ardboe struggled to make it count, chiefly thanks to some excellent defensive work from Teague, Conor O’Hara and Nathan McCarron.

Sean McNabb collected McGrath’s pass to shoot his side back in front, but a poor clearance gave Michael O’Neill the opportunity to pick up and feed McGourty to call a mark and despatch his third score.

Dromore pressed again, and but for some stoic work from Oisin Devlin they could have been in for a goal, with Conall Devlin and Oran Mulgrew also doing well at the back.

But the St Dympna’s finished the half on a high when Niall Sludden spotted a gap and raced through for a classy point, sending his side in with a 0-5 to 0-4 interval lead.

The men from the lough shore were level within a minute of the restart when Michael Lynn slotted over a point, and they now had Kyle Coney in the action, on as a half-time sub after being unable to start due to injury.

But they lost All-Ireland winner Michael O’Neill just five minutes into the second half to a knock, with another member of the Tyrone squad, Michael Cassidy, also inhibited by injury, coming in to replace him.

Dromore had to dig deep to turn back a couple of Rossa raids, and won frees that Peter Teague and Emmet McNabb converted.

However, they rallied for Caolan Mallaghan to collect a Cassidy pass to shoot a point, but less than a minute later, another Teague free restored the two points advantage.

Paul McHugh, Conor O’Hara and Ryan McCusker defended with discipline as Ardboe drove forward in search of scores, and during a difficult spell, the men from Gardrum Park were temporarily reduced to 14 players when Emmet McNabb picked up a black card.

Coney sent over appoint just before the second drinks break to reduce the deficit to one, but Ardboe were showing resilience and spirit, pushing up on the Dromore kick-out.

McGourty slotted a couple off frees between the posts, but Dromore were able to find responses each time, with wing back Colm O’Neill sprinting along the right flank for a fine point, and the pace of Ryan McCusker driving through the middle drew another free which McNabb sent between the posts.

But the Rossas had more in them, with Conall Devlin and Oran Muglrew pressing with conviction, and McGourty landed a superb score from a difficult free into the wind to bring them level with two minutes to play.

It was all set up for a gripping finish, but it was Dromore who found the answers, and late sores from McNabb (free) and O’Neill, clinched it for them.